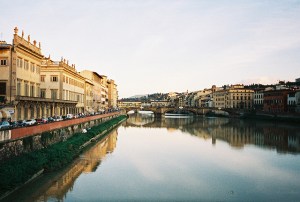 Kanye West: “I think that our daughter North was conceived here among the Renaissance masterpieces” (in Florence). [Daily Mail]

The Guggenheim Foundation fires back against a suit brought by the grandchildren of Peggy Guggenheim. [The Art Newspaper]

“Saudi Aramco, the hugely powerful oil and natural gas company…announced further details of a cultural centre under ­construction. The King Abdulaziz Center for World Culture, named after Saudi Arabia’s first monarch, is to open in late 2015 and, according to Laila Hussain Al-Faddagh, the contemporary Middle Eastern art co-ordinator for Saudi Aramco, it will offer visitors an experience ‘unlike anything seen before in the Kingdom.'” [The Art Newspaper]

“Organizers of the Webby Awards named the British artist Banksy the Webby Awards Person of the Year. But it is uncertain whether the elusive artist will attend the ceremony in New York on Monday.” [WSJ]

“Have you got what it takes to follow the Abramović method?” [The Guardian]

“In the new romantic comedy ‘Words and Pictures,’ a rolling office chair becomes a tool for art creation.” [NYT]

Whoa! PS1 organized a Charles James in 1981. [Inside/Out via @PaolaAntonelli/Twitter]