Arthur Gelb, the legendary New York Times critic and editor who died yesterday at the age of 90, was born “in the back room of his parents’ dress shop in East Harlem,” according to Sam Roberts’ superb obituary. (New York Times)

An Associated Press photo editor accidentally included a portion of her cover letter—it was addressed to Buzzfeed—in a photo caption. Oof. (Gawker)

The BBC’s Jeremy Paxman asked former Italian prime minister Silvio Berlusconi “one of the most jaw-dropping questions we’ve ever heard,” according to the Huffington Post. (Huffington Post)

How do small screens impact photojournalism? Poynter looks into it. (Poynter)

And, finally, this has nothing to do with media, but it shouldn’t be missed. Check out Rosie Schaap’s great online interactive cocktail generator for some summer drink ideas. (New York Times) 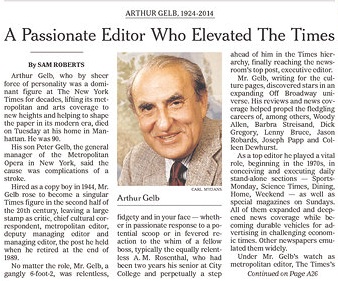