A microphone tech claims he got fired from CNN for being gay, wearing brightly colored mariachi suits to work. “I feel like the Rosa Parks of CNN. Maybe someone else won’t have to suffer the way I have,” said the ex-employee, who is suing the network. (The Daily News)

Writer and New York Times contributor Alex Kuczynski used some new car service app called Blade to get to the Hamptons. Since The New York Post was included (along with champagne and a t-shirt) in the ‘welcome package,’ the tabloid concludes that Ms. Kuczynski “obviously enjoys a lively read.” (New York Post)

Jessica Coen is leaving Jezebel after running the site for four years. “My husband, mortgage, and cat are all in Chicago,” she said. “I’ve been flying to New York near-weekly for 18 months now. And as much as I love those late nights spent looking for a power outlet at LaGuardia, the commuter lifestyle has lost its charm.” (BuzzFeed)

Gawker is looking for a replacement:

Jess and I /are/ talking to folks internal and external about the next Jezebel EIC. Don't be shy if you want to talk. joel@gawker 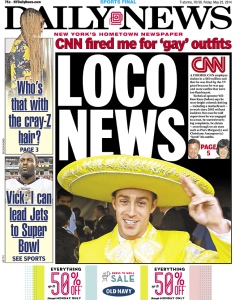