According to a new DNAinfo.com report, Congressman Michael Grimm, a former FBI agent, was barred from returning to the FBI’s field offices even before last week’s indictment: “[S]ecurity personnel at the FBI’s headquarters in Lower Manhattan and a satellite office in Kew Gardens, Queens, posted Grimm’s photo inside their glass-enclosed stations in the event he showed up, sources said.”

The report continues: “Sources say Grimm’s FBI identification picture was posted shortly after he resigned from the bureau in 2006 and now hangs with about two dozen other ex-agents and federal employees. ‘They are all employees who were fired, or they were under circumstances where … are no longer welcome back,’ the former FBI official explained.”

This afternoon, Bill de Blasio will unveil his Fiscal Year 2015 Executive Budget. In a New York Post column titled “Bill de Blasio’s risky ‘Boogie Nights’ budgeting,” Nicole Gelinas writes that he “could bring us back to the ’70s. The mayor will borrow a good $2½ billion to pay for operating expenses — precisely the practice that led the city to bankruptcy four decades ago.”

“Can we trust Bill de Blasio’s numbers?” the New York Post‘s editorial board asked on the topic. “Today Mayor de Blasio will give us his hopes and priorities when he presents his first executive budget. Here’s the question: Can New Yorkers trust his numbers? Even the liberal New York Times is unsettled by the new mayor’s fondness for making big promises”

Speaking of Mr. de Blasio’s numbers, his deal with the teachers’ union may be more than meets the eye, Capital New York reports: “Despite assurances from leaders of the city teachers’ union that members ‘should not’ have to pay more toward their health insurance as a result of their agreement with the de Blasio administration, that remains a possibility.”

Looking at Chiara de Blasio openly discussing her personal struggles with depression and substance abuse, New York argues that “the radical exposure of the de Blasio family does not feel at all like an accident. It also no longer feels like a cynical tactic for political gain, as was widely suggested when de Blasio made his son Dante a centerpiece of his campaign for mayor.”

And Congressman Steve Israel, who heads the DCCC, does not want another term as the leader of House Democratic campaign efforts. “Let me think about it,” the Long Island Democrat told CQ Roll Call in a recent interview. “No! No. No. No.” The same publication named Queens Congressman Joe Crowley as a possible replacement. 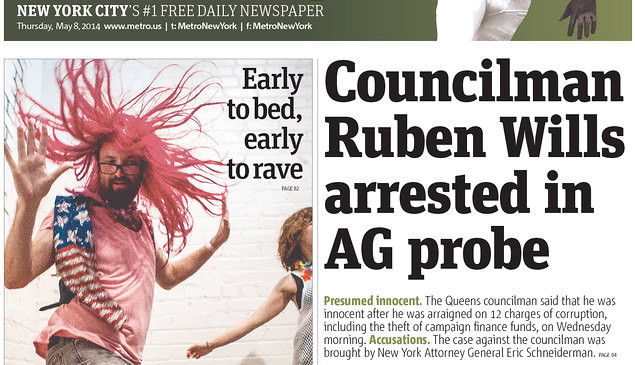