Headline of the Day: “De Blasio and Cuomo: A friendly rivalry [illustration].”

Gothamist appealed the Bill de Blasio administration’s non-response to their FOIL request for documents associated with the Bishop Orlando Findlayter controversy. The publication found that the administration is now arguing those documents are exempt: “Their claim: none of the records exist, except that they do, but we can’t have them. Confused? So are we.”

Mr. Findlayter appeared in court yesterday to argue that he was arrested in error back in February, the Wall Street Journal reports: “On Thursday, defense attorney Mark Pollard rejected an offer from Brooklyn prosecutors that the bishop pay a $75 fine to resolve that case. Mr. Pollard outside court said he would … present evidence that his client’s license was suspended in error.”

His opponent may be indicted for tax fraud, but Democrat Domenic Recchia insists that Congressman Michael Grimm is still a formidable foe. “Michael Grimm is a hard worker. This is just the beginning. There’s a lot more to do,” Mr. Recchia told the Staten Island Advance. Meanwhile, former Congressman Mike McMahon, defeated by Mr. Grimm in 2010, told the paper, “Happy days are here again.”

New York magazine writes that Mr. de Blasio’s teachers’ union contract deal yesterday had an “abundance of irony” and was  “alarmingly vague” on key details: “If he pulls it off the gains—to use one of de Blasio’s favorite words—could be ‘historic.’ Yet the particulars of just how the city will be paying for the raises—or even the total cost of the raises—are alarmingly vague.”

The Daily News editorial board was skeptical about many of the deal’s details: “Take a hard look at the new teacher contract deal’s supposedly historic reforms, and you’ll find measures that may improve the system as advertised — or may chip away at the crucial autonomy and authority of managers to run their schools.”

While the New York Post editorial board had some praise for the deal: “Perhaps most important is the $1 billion in savings the mayor says he and the UFT will seek in health care. We have few specifics, though the mayor mentioned sensible possibilities such as auditing benefits to remove those not entitled. If the mayor makes good on the promised savings, it would be a huge step forward.” 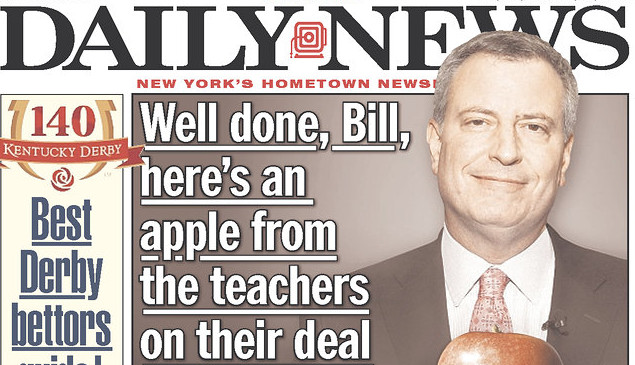