Headling of the Day: “How not to save a Brooklyn hospital.”

Though Congressman Michael Grimm is not accused of any campaign finance fraud, his former “very close” associate, Texas businesswoman Diana Durand, was arraigned in federal court on campaign finance charges, the Staten Island Advance reports: “But attorney Stuart Kaplan told reporters after the arraignment that Ms. Durand was “not a sophisticated woman” and was unaware of campaign finance laws.”

The New York Times editorial board argued that Mr. Grimm’s scenario justifies an election-rules change: “The law should be amended to make it far easier for candidates to remove themselves from the ballot on their own initiative. Absent that option, Mr. Grimm should agree to lose one for his party.”

On NY1’s Inside City Hall, Congressman Steve Israel, who is the chair of the House Democrats’ campaign arm, said his group was “absolutely” committed to providing financial resources to Mr. Grimm’s rival, former Councilman Domenic Recchia. “This is going to be one of the top races in the country,” said Mr. Israel.

In a piece titled “De Blasio’s New Plan to Create or Save 200,000 Cheap Apartments Is Going to Make a Lot of People Angry,” New York‘s Chris Smith writes, “But what’s most striking about the plan [is] … that by launching such a far-reaching program, instead of focusing on a narrower list of goals, de Blasio has ensured himself hundreds of political fights trying to make it happen.”

The Daily News editorial board would likely agree with Mr. Smith’s premise. “City Hall disingenuously says that it wants to only move to build affordable housing where communities are demanding it. As de Blasio himself knows from the Atlantic Yards development, which he rightly backed against furious neighborhood resistance, there will be fights. Loud ones,” the tabloid argued.

In a New York Post column, the Manhattan Institute’s Howard Husock was even more disenchanted. “In short, the de Blasio plan is built on what has long been the city’s dysfunctional dogma,” he wrote. “A real free market for the city’s housing market isn’t on the horizon at present, though. We may have to settle for not strangling private development altogether.”

The New York Times editorial board, meanwhile, was more upbeat on the topic: “[I]f Mr. de Blasio really is going to keep his campaign promise … he is going to have to go big. And this plan is what big looks like. … The all-important details have yet to be filled in, but the mayor has locked himself in with a hard and fast number: 200,000 or bust.” 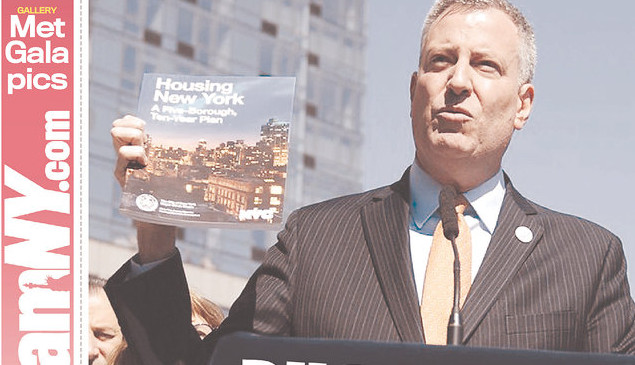