There’s an ugly history here between Munoz and West New York Mayor Felix Roque, who installed his former campaign manager as town administrator just prior to the hurricane and who now backs Commissioner Caridad Rodriguez against Munoz.

DeMarco said he’s proud of his service in the aftermath of the natural disaster.

But Munoz – the government’s star witness last year in a federal hacking case that Roque walked away from – claims the town administrator loaded up a generator for his own use in his home town of Bernardsville.

DeMarco said he carted a generator to his powerless Somerset County home only after crews restored power to West New York.

He borrowed it for four or five days, he said.

Police investigated the incident and decided against taking action.

DeMarco said he slept in West New York in the immediate aftermath of the storm.

“During the hurricane, commissioners, myself and others could be seen during the six days of no power at the shelter feeding residents, at the charging stations, administering and meals, and answering their calls,” DeMarco said. “I never ever saw Freeholder Munoz serve one plate of food or help.

“Where the hell was he?” DeMarco wanted to know. “He was nowhere to be found. The question is where was he during the hurricane?”

Munoz said the local political establishment blocked him out of the service stations.

“I was in the street after Hurricane Sandy, together with Commissioner Count Wiley, and we were helping people,” said the freeholder. “The mayor has a closed-door policy. They would not allow me to be there. But in the county we set up shelters to make sure residents had what they needed.”

Off the line in Hudson, Munoz has run an aggressive campaign to try to survive.

Sources say he has strong support in the West New York portion of the freeholder district.

If the establishment is going to get rid of him, it will be because of the support Rodriguez receives in the Weehawken and Guttenberg portions of the district, sources say.

As for DeMarco, he’s in his own continuing brutal contest in Bayonne, where he serves as the campaign manager of challenger Jimmy Davis, who’s in a June 10th runoff election with incumbent Mayor Mark Smith. 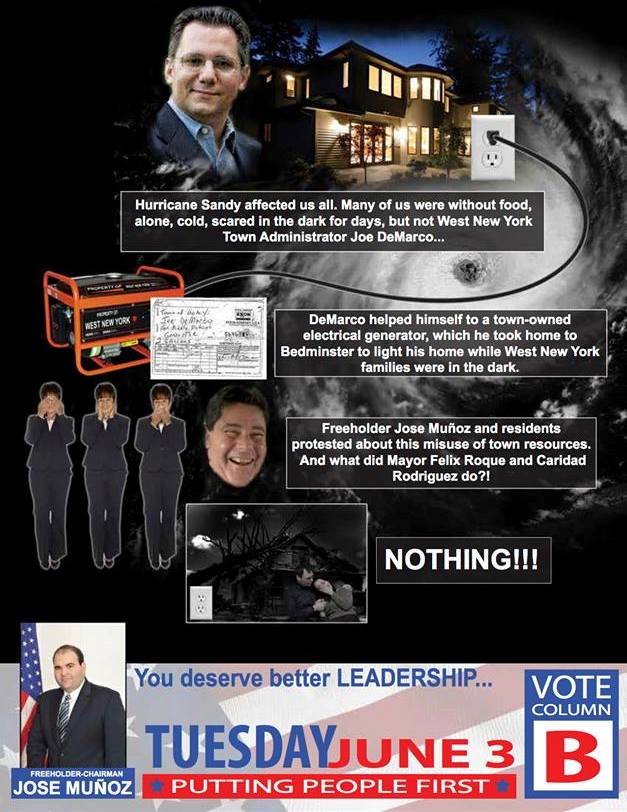