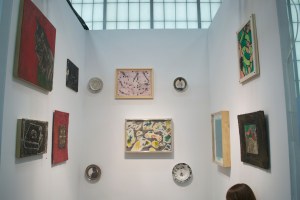 What Pipeline’s booth. (Photo by the Observer)

Detroit’s What Pipeline gallery has won the NADA Artadia award at this year’s edition of NADA New York. That accolade carries with it a $4,000 unrestricted award that is funded by its two namesake organizations.

What Pipeline, which artists Alivia Zivich and Daniel Sperry founded last year in Detroit’s Mexicantown neighborhood, has a modestly sized Project booth at this year’s fair, but they have done a lot with it, showing work by Paris-based Will Benedict, Londoner Tom Humphreys, Berlin-based Lucie Stahl and Detroit-born Mary Ann Aitken, who passed away in 2012.

At past fairs, the jury has given the NADA Artadia Award to an individual artist. This year’s jurors, Ingrid Schaffner, the chief curator at Philadelphia’s Institute of Contemporary Art, and Carin Kuoni, the director of the Vera List Center for Art and Politics, explained why they instead went with an exhibitor, selecting What Pipeline:

It represents to us a relevant and future-oriented model of how artists collaborate locally and beyond by establishing networks that operate both outside of, and through, the art world’s centers. Activated by different contexts—studio, exhibition, gallery, art fair—these ad hoc aggregates of artists perform different functions within our very complex art system. And while Detroit may have its own gravitational pull right now, What Pipeline seems purposefully situated to exert pressure from within—and upon—this most utopian of dystopias on contemporary culture at large.

The NADA Artadia Award at the 2013 edition of NADA New York went to Meg Cranston, who was showing with Fitzroy and Newman Popiashvili.