For clarification, he also posted an Urban Dictionary definition of “neckbeard” — “a talkative, self-important nerdy man who, through an inability to properly decode social cues, mistakes others’ strained tolerance of his blather for evidence of his own charm.”

In less than a day, the post attracted thousands of comments and stories of recovery from neckbeard-dom — from people who’d had crippling World of Warcraft addictions, to those who’d gained a hundred pounds due to inactivity, to people who were repeatedly and painfully friend-zoned, and still remained virgins into their 30s [all sic].

“My WTF moment was when my 2 roommates said ‘Hey, we’re going to shoot pool at the bar. Wanna come?’ and my response verbatim was ‘No, I gotta raid.’

“Quit WoW and haven’t played since. I’m still a lonely virgin, but at least I quit MMOs.”

“I was in my early 20s. Looked at my thick, partially matted metalhead hair, dumb long goatee and BitTorrent t-shirt in the mirror one day and shaved them both off and chucked the shirt. Never looked back.”

“During the years 2008 – 2009 i played world of warcraft 10 hours a day and was failing school because of it, got extremely overweight and lost alot of good friends because all i wanted to do was play wow. I didn’t go to my formal because i had a raid on and needed to be there, oh how i look back and cringe at those days. Not really sure how i got out of the phase but i haven’t touched wow in 2 years, go to the gym 5 days a week and so far i’ve lost 26kgs. I have a girlfriend and i moved out of home i still play video games but its really just a hobby and i never play more then 10 hours a week.”

“was into wow way too much skipping duty and work, ignoring responsibility. The south park episode premiered with the fat dude who wore a wrist brace and a chip bowl on his lap and a greasy shirt playing wow with no joy just emotionless boredom clicking away. I looked down to see a bowl of chips I didnt even remember getting myself and a shirt I had wore for 3 days. Got up mid raid on huhu 30% got a shower uninstalled left a goodbye message on our guilds forum. 6 months later I had a girlfriend again and suddenly wasnt blaming everyone else for my depression and lonliness.”

Neckbeards get a bad rap for their air of intellectual superiority and tendency to trash talk innocent women that aren’t interested in dating them, so it was nice to see those same people being capable of thoughtful introspection and lovingly supporting one another. We never thought we’d use this word in the same sentence as “neckbeard,” but it’s actually really heartwarming [all sic].

“Early last year when my girlfriend at the time broke up with me. I thought I was so unbelievably awesome that it was her mistake.

“Looking back at the way I acted I realize I was a total tool at the time. It took a lot of self examination for me to realize talking down to people and treating them like garbage isn’t a way to make friends or really have anyone like you.”

“Entering a long term relationship really put my bullshit in check. I used to wear an ugly fedora, play in a prog-rock band, self profess my music elitism, and blamed the women who friendzoned me as being superficial. Seriously, date someone who will make you a better person.

“Prog rock is still cool tho.”

One of the most intriguing aspects of the thread was how all of these neckbeards, despite not personally knowing each other and living in different parts of the world, all naturally developed the same characteristics. There’s no pop culture icon nor official literature dictating the tenets of the neckbeard lifestyle, so how did they all inherently know to wear wallet chains and preach atheism and worship Tool? Are humans worldwide born with latent fedora-loving genes that can only be triggered through excessive time spend in the deepest bowels of the Internet? It’s mystifying.

Anyway, it’s nice to see that people who once used aggressiveness to hide their insecurities are learning to interact like peaceful, respectful humans. Their World of Warcraft guilds might be suffering, but we assure them that the rest of the universe is grateful. 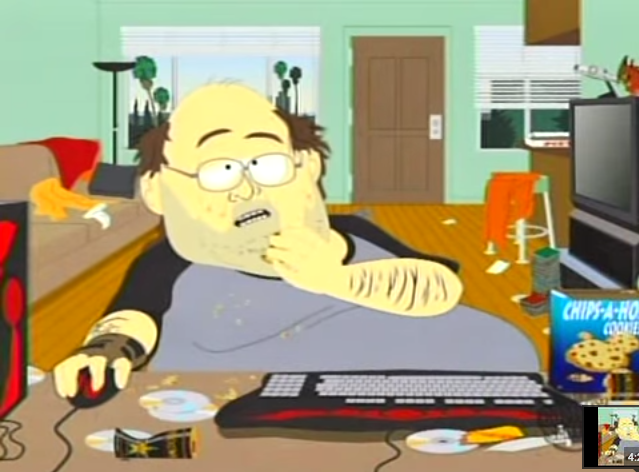