“I am very disturbed that in this runoff there will be no debate between me and Ms. Chaneyfield,” said Sharif, sitting in his City Hall office. “Constituents are coming up to me and saying that this is unfair. Our residents want to see us face off against each other.”

Sharif noted a conversation he had with local Cablevision station officials in which he was informed that a televised debate between the two Central Ward runoff candidates would not be possible before the election because of budgetary reasons.

“These runoff debates have always been a custom and a tradition of these runoff elections,” Sharif said. “That explanation for me really is unbelievable. They own the facility. They own the cameras. The most that they would have to pay for is for a moderator. I offered to raise the money for that, because I think that it is critical with 13 days left [before the runoff election] for us to present our views and our accomplishments before the public. I think the people on [Chaneyfield Jenkins’] team are trying to run out time from the clock. They know about her record, and that record has been made public to everybody.”

Sharif referred to an anonymous website that questions the qualifications and ethics of Chaneyfield Jenkins, who is the Central Ward candidate on Newark Mayor-elect Ras Baraka’s slate and who served as councilwoman-at-large from 1995 to 2006.

The website, named “Tell the Truth Gayle”, attacks the former city councilwoman on a variety of issues, including questions about a reported taxpayer-funded junket made by Chaneyfield Jenkins and her staff to Ghana, as well as her contribution to thousands of dollars spent by City Council members on meals.

One significant allegation made on the website alludes to a 2009 proposal by some members of the City Council to award Jericho Group, a company created by Chaneyfield Jenkins after she was voted out of office in 2006, a $350,000 contract to provide the council with expert advice on the city’s development deals. The council ultimately did not approve the proposed contract.

Sharif said that while he had “no idea” regarding who launched the anti-Chaneyfield Jenkins website, he “applauded” its content.

“This particular challenger has more baggage than Samsonite. They don’t want that baggage to be exposed in a debate,” said Sharif, who said that he cared neither about the locale of any potential candidate debate, nor if such a debate was televised or not. “I want to engage her directly.”

Don Viapree, the director of government affairs for Cablevision in New Jersey, did not return a phone call seeking comment.

“It is not surprising Councilman Sharif chooses to spend his time attacking Gayle Chaneyfield Jenkins,” replied Khalil Nassiruddin, spokesperson for Chaneyfield Jenkins campaign, in an email to PolitickerNJ.com. “During the election cycle Gayle Chaneyfield Jenkins participated in six debates [or] forums with Darrin Sharif. The people had the chance to hear from all parties and make an educated decision. There is absolutely no precedence for Council candidates to debate in time between the general and run-off elections. Mr. Sharif intends to use a debate platform to further smear Gayle Chaneyfield Jenkins. He is not concerned with the issues facing residents.”

Sharif, however, appealed to Mayor-elect Baraka as he pressed his case to debate Chaneyfield Jenkins, suggesting that Baraka’s desire for a solid fifth ally on the next nine-member Newark City Council could be clouding his judgment.

“I want to work with our Mayor-elect,” said Sharif, who was elected to the council in 2010, ran unsuccessfully for mayor earlier this year and is the son of Carl Sharif, a top adviser to former Newark mayor and now U.S. Sen. Cory Booker (D-NJ) who most recently advised Newark mayoral candidate Shavar Jeffries. “But I am confused that our new mayor, who has been branded as a transformative leader looking towards the future, is aligned with somebody who we should leave in the past.” 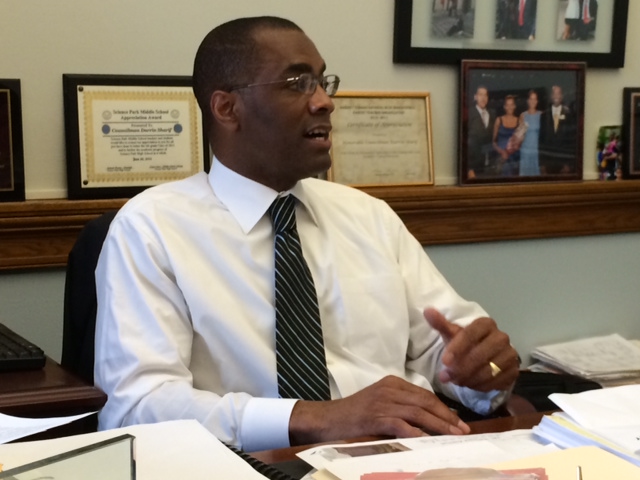