NEWARK – The two major Newark mayoral candidates entered the Cablevision television studios on Central Avenue on Wednesday night for the final debate before the election. They entered in almost the same way that two fighters enter a boxing ring.

In one corner was South Ward Councilman Ras Baraka. In the other corner was former Assistant Attorney General Shavar Jeffries.

Baraka was escorted into the waiting room by his aide Kiburi Tucker, the son of Assemblywoman Cleopatra Tucker (D-28) and the late Assemblyman Donald Tucker. The Tuckers were married by Councilman Baraka’s late father, the poet and activist Amiri Baraka, Sr.

Jeffries was escorted into the waiting room by Teresa Wells, a media consultant according to her LinkedIn account. Wells worked as the traveling press secretary for former New Jersey Governor Jon Corzine, under whose administration Jeffries served.

The two candidates sat perhaps two feet apart before the one-hour debate began. They exchanged not a glance, not a word.

When the red camera light flicked on, both candidates saw red, their policy and personal differences coming sharply into focus.

Two issues that have been constant themes throughout the campaign to run New Jersey’s largest city surfaced again as debate flashpoints: public safety and education.

“We reduced crime at Central High School. We began to eradicate gang violence in the city. The Fraternal Order of Police endorsed us,” said Baraka, referring to his regular job as Newark’s Central High principal, from which he is on leave, as well as gang ceasefire initiatives he has been involved in. “[Our approach] is very creative about reducing crime in this city that just does not concentrate on putting police on the street.”

“We know where crime didn’t go down, and that’s in the South Ward under Councilman Baraka, where murders have gone up 70 percent,” Jeffries replied. “Gang culture is taking over the South Ward.”

One of the evening’s commentators, Alexandra Hill of WBGO News, asked both candidates about the controversial One Newark school reorganization plan proposed by state-appointed Newark School Superintendent Cami Anderson. The plan includes the expansion of charter schools, which already serve approximately 20 percent of the city’s students, as well as the closure or consolidation of certain public schools. Newark’s schools were placed under state control in 1994.

“The superintendent is going to be subordinate to our administration,” said Jeffries, who served as the president of the Newark school advisory board. “We’re going to lead when it comes to the education of our children.”

“So the superintendent has to go,” Baraka replied. “Cami Anderson has been consistent. She’s not different today than she was last year. [Jeffries] supported her last year, but is against her this year.”

Among the rapid-fire, tense exchanges between Baraka and Jeffries, one moment stood out.

Part of the format of the televised debate, broadcast locally and statewide, included opportunities for the candidates to ask each other questions.

Baraka questioned Jeffries about his assertions that under Baraka’s leadership, Central High School has essentially failed its students.

“I would like to know why you didn’t come to the school and congratulate us or the children for the work that we’ve done,” asked Baraka, citing recent improvements in student performance.

“I know you think the world revolves around you and your meetings and everybody has to come to see you and to come to your meetings,” Jeffries replied. “Rather than revolving my world around you, what I’ve done is for 15 years represent Newark’s children and families.”

After the debate ended, PolitickerNJ.com asked Baraka and Jeffries exactly the same question. It is a query that could prove critical in deciding which man will become Newark’s next mayor when city voters go to the polls on May 13, just five days away.

How do you take the other guy out on Election Day? Is it via an airwave bombardment or a ground attack? And which plan do you think is more effective?

“We don’t need to do nothing else other than what we’re doing,” Jeffries said. “We’re going to pull out voters on Tuesday. There is no dramatic game plan. Everything matters. The air game matters because you can communicate directly to people. The ground game, where you communicate directly at [voters’] doors, matters. And then on Election Day, it’s obviously all about the ground game, because you have to pull out the people that you have.”

“In the last couple of days, we’re going to talk to as many voters as we can,” Baraka said. “It’s our get-out-the-vote operation that what’s ultimately going to make it happen at the end, and that’s how we get over the finish line. The last day is all ground game.” 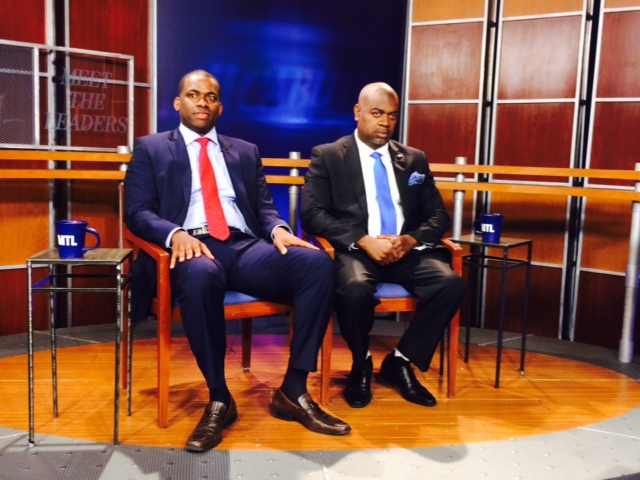