“I said we were going to take City Hall, and we’re here on the steps of City Hall,” said the triumphant Baraka, in front of 500 supporters who marched from his victory party at the Robert Treat Hotel to Newark City Hall flashing V for Victory signs.

“I am overwhelmed right now, I miss my father but he’s with me now,” said the Newark mayor-elect, referring to the late poet Amiri Baraka.

“The machine is breaking,” he said.

Nonetheless, Baraka said he was ready to speak to Governor Chris Christie about the future of New Jersey’s largest city.

“We need to work with the governor and he needs to work with us. It is in his best interest to work with us and the residents of Newark, the state’s largest city, to come up with a self-help program to get us out of this situation we are in.” 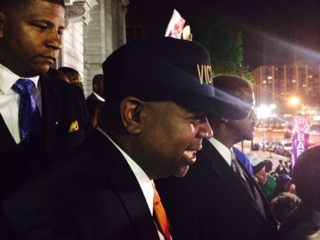