After joking with poll workers inside the more-than century-old church at the corner of Avon Avenue and South 10th Street, Baraka stepped inside the voting machine’s maroon curtain. He then pressed the necessary buttons, and walked out into a lightning storm of photo flashes, flashing the V-for-victory sign that has become a symbol of his campaign.

“This was a hard-fought race, but all is well today. We’re going to come out victorious,” Baraka, 44, said. “We’ve worked harder than we even did before, doing something people didn’t think that we were able to do. But we’re here. The people’s voice will be heard by the end of the night. I expect to have a praise dance on City Hall steps.”

The streets of Baraka’s native South Ward were teeming with election workers, some dressed in the blue tee shirts of the Baraka team, others wearing the orange tee shirts identified with Baraka’s mayoral race opponent, Shavar Jeffries.

Baraka was confident that despite the hundreds of thousands of dollars spent by a pro-Jeffries independent expenditure group to finance an airwave bombardment of his campaign, the political war to control Newark would be won not on the airwaves, but in the streets.

“I think our ground game is incomparable in the state,” Baraka said, smiling. “We’re going to do a lot of work today. We’re going to be out in these streets. We’ve going to leave no store unturned.”

Before heading off to help is own get-out-the-vote effort, Baraka acknowledged that the eyes of New Jersey’s power brokers are locked in on the state’s largest city today. 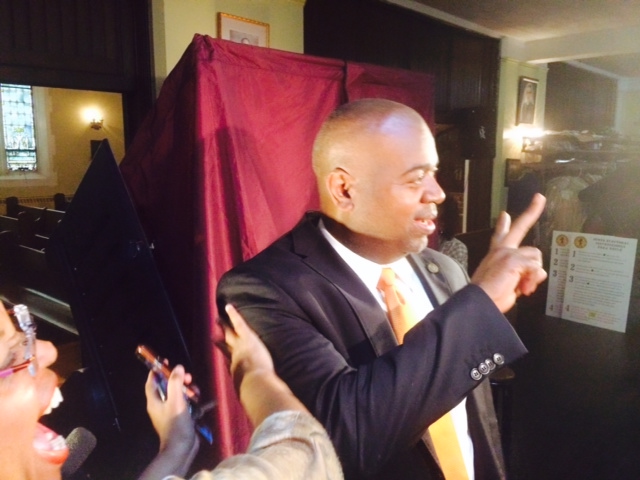