NEWARK – Keer Chatman has been a hairdresser at Kleen Kutz salon and barber shop on Bergen Street in Newark’s South Ward since 1997. For her, the main issue when asked if Ras Baraka or Shavar Jeffries should be Newark’s new mayor is simple and direct.

“It’s about the truth, which is not being represented,” said Chatman, 42, who owns the salon near the corner of Mapes Avenue, on Saturday afternoon. “I know this is how politics goes, but they are really making it seem like Ras Baraka is doing nothing for us. It’s not true. He’s been a savior for us, especially over here in the South Ward.”

When asked if she was troubled that Baraka makes well into the six figures annually because of his jobs as both the South Ward councilman and as principal of Central High School, Chatman was not disturbed.

“Once he becomes the mayor, he’s not going to make that money no more. If he was money hungry, he’d still be at the school. And he did a great job at the school,” Chatman said. “It ain’t like he made none of this money free.”

Whoever becomes Newark’s next mayor must contend with the city’s deadly serious public safety problems. The city saw 111 murders last year, the highest total in nearly a quarter of a century. Many of these killings took place in the South Ward.

Jeffries, who previously served as a state Assistant Attorney General, has been highly critical of Baraka for writing letters in support of a convicted gang leader in 2010. Baraka defended his actions, stating that such convicted gang leaders could help the community resolve gang-related conflicts that result in homicides and shootings in New Jersey’s largest city.

Chatman momentarily put down her scissors, then cut to the point about Baraka’s relationship with Newark gang members.

“Just because you know gangsters, that doesn’t mean that you’re in it,” Chatman said. “Ras is from the schools. He’s seen gang culture in the schools, and he wants to stop it. If we don’t speak to them, do you think you’re going to stop it? If you do, you don’t know nothing.

“What about when they burned Ras’ bus? That’s gangster-ish. And these are people who worked for Shavar, not just volunteers,” added Chatman, referring to the February bus burning incident that led to arrests in April in connection with the alleged arson. “They got paid.”

Supporters of both Baraka and Jeffries claim that their candidate represents what Newark truly is, and what it should be.

For Chatman, seeing is believing.

“I have no specific problem with Shavar, but I don’t know him. I’ve never met him. Nobody that I know knows him, good or bad,” said Chatman, despite the fact that Jeffries grew up on Harding Terrace, just a few blocks away from her salon. “It’s too late to introduce yourself to people and then want them to vote for you. If Shavar walked through my door right now, I wouldn’t even speak to him. It’s too late for us to talk about something this serious with just a few days left before I make a decision. He wasn’t around before this, and I suspect he wouldn’t be around after this.”

In the last few weeks, Jeffries’ face has often been on television. Baraka has experienced an airwave assault as hundreds of thousands of dollars funneled from a pro-Jeffries independent expenditure fund have financed a slew of TV commercials seeking to destroy Baraka’s campaign.

“Money isn’t everything,” Chatman said. “[Former Newark mayor and now U.S. Senator] Cory Booker was on TV more than you seen him here. Ras was here.”

Both candidates spent the last weekend before the May 13 election desperately seeking last-minute votes. When assessing what Tuesday’s outcome might be, Chatman remembered what a customer told her two weeks ago while she did her hair.

“My customer told me that she was undecided. She said that she remembered Shavar and his family, and that she was thinking about voting for him,” Chatman said. “I told her to give me her number. I gave it to Ras, and he spoke to her personally. She’s a talker, but she told me that Ras didn’t rush her off the phone. That’s what I like.”

Chatman predicted a 70 percent to 30 percent margin of victory for Baraka in the South Ward on Election Day.

“Ras has proven something to me. He earned my vote,” Chatman said, turning back to her latest customer. “I believe in Ras.” 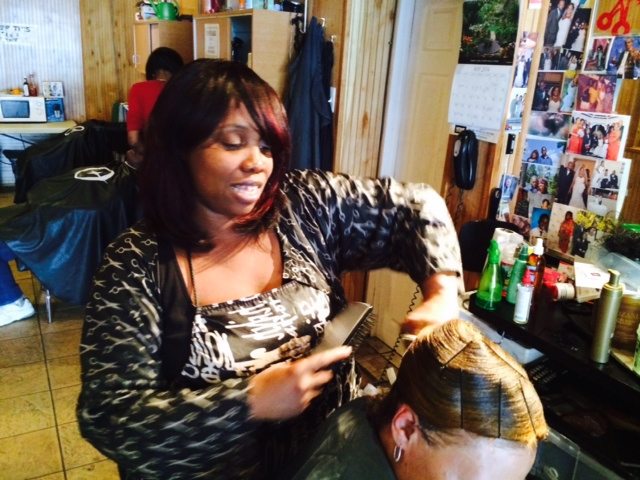