NEWARK – A quick glance at Harding Terrace, the street deep in the South Ward where Newark mayoral candidate Shavar Jeffries grew up, shows many of the signs of urban blight. But for Jeffries, the place means something beyond broken glass and boarded-up windows.

Observers of New Jersey politics might say that running for mayor of the state’s largest city is a politician’s most severe test. But for Jeffries, the greatest crucible of his life came when his mother was murdered, a victim of domestic violence. Jeffries was ten years old at the time.

“I was collectively raised by the rest of my family and by my community. It really was a village,” Jeffries remembered, pointing to his maternal grandparents, his aunt, and time spent at the local Boys and Girls Club, as having a particularly strong impact on his life. “I’m a reflection of all of those influences. They taught me about perseverance, struggle, that difficult times are inevitable. It’s about how you respond to difficult times, and fulfill the promise that you have.”

Jeffries tried hard to fulfill that promise as he graduated Seton Hall Prep, Duke University and Columbia Law School. A corporate lawyer at one of Newark’s largest downtown law firms, Jeffries also serves as an adjunct professor at Seton Hall Law School, where he helps to run a civil litigation clinic in the school’s Center for Social Justice.

While the professional accomplishments of Jeffries, a former state Assistant Attorney General, are impressive, it is his marriage to his wife, Tenagne, that provides the foundation for his future.

Jeffries met his wife in 1998, when he was a summer associate at a Washington, D.C. law firm.

“I was getting ready to go to a lounge, trying to mind my own business, when she was staring at me while I was trying to cross the street at the corner of 14th and U,” Jeffries said, smiling. “I saw her, and I wanted to meet her, but I froze. Then I went to this club, and I saw her again. Then I approached, and here we are. She’s everything to me. I trust her dearly. I love her fully. She’s an amazing wife, mother and person. I trust her more than anybody.”

For the record, Tenagne, a businesswoman and the mother of Jeffries’ children – son Kaleb, 9, and daughter Naomi, 7, didn’t quite agree with her husband’s account of their first encounter.

“Oh hell no,” she said. “Shavar was staring at me the whole time.”

If Jeffries defeats rival Ras Baraka and is elected Newark’s next mayor on Tuesday, he will be staring at an estimated $93 million municipal budget deficit and a potential state takeover of the city’s finances.

“That’s why you have to have a mayor who can collaborate and partner with people. If the state comes in or not, we’re going to have to partner with them,” Jeffries said. “We’re going to need investments from the state in order to deal with this budget deficit. I’m very confident that I’ll be able to lead in a way that will be more influential that my opponent. It’s not just about raw power. We have strong relationships with a little bit of everybody. The mayor has to be an executive officer that manages the resources of the government and produces actual results that improve the people’s quality of life.”

Jeffries never ran for city council or for mayor before this election cycle. However, he points to his time on the Newark school advisory board, where he served as board president, as proof that he can win a citywide race, no matter how intense the campaign gets in its final days.

“I’m the only one in this race who has won a citywide election,” Jeffries said, adding that he has 15 years of public service experience under his belt. “I don’t view it as crazy, because I went through more than any of this when I was ten years old. It is what it is. It’s not an easy process, but I’m used to doing hard things.”

One of the hardest things that happened to Newark was the civil disturbances of 1967, six days of destruction that still affect the way New Jersey’s largest city is perceived. That same year, Detroit was also engulfed in flames. The Motor City still struggles to rev its civic engines, as square miles of the city sit abandoned like fallow fields.

During his stump speeches, Jeffries has repeatedly warned that without change, Newark could be on “the path to Detroit.”

“There is a lot of conversation about what does a post-industrial city look like going into the twenty-first century, and how do we get there. The problem with Detroit is it didn’t change, it didn’t innovate,” Jeffries said. “It kept doing the same thing – the same contracts, nepotism, politics and patronage that the city couldn’t afford. Then it caught up with them, and the city crashed and fell. We have to decide if we are going to modernize and reform ourselves now, or are we going to just put our head down and keeping doing the same thing.”

No matter what happens on Tuesday, Jeffries is looking forward to catching up with his family after the election – heading to South Beach, Miami with his wife, playing football with his son, reading his daughter a book.

“She actually writes her own stories,” Jeffries said. “Then she wants me to read them back to her.”

For Jeffries, his life story is what drives him, a parable born in Newark.

“I have undying love for the people, and undying love for what the people have done for me. My presence here really doesn’t make sense disconnected from the grace of God and a group of people, starting with my family, but also a broader community of people,” Jeffries said. “The opportunities the community gave me enabled me to be here. I’m committed to the people, and I want to serve them. The reality is this – the story of the average Newark kid is a story like mine.” 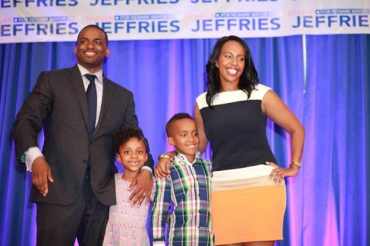