BELLEVILLE – The DJ at the Essex County Democratic organization combination pre-election rally and Mother’s Day celebration at Nanina’s in the Park in Belleville cranked out some favorite tunes for the crowd of more than 300 seniors. Listening to “Summer Wind” by Frank Sinatra, they assembled on the day before the city of Newark, just across the border, decides which man will be mayor: Ras Baraka or Shavar Jeffries.

After seeming to stand on the sidelines for months, Essex County Executive Joe DiVincenzo came out publicly in strong support of Jeffries on the campaign’s last day before Newark voters make their move.

“This is a very important election. I don’t have a vote because I don’t live in Newark, but you do and your friends do,” DiVincenzo, a Newark native, said. “We need every vote to come out to support Shavar Jeffries, [North Ward councilman] Anibal Ramos here in the North Ward and Shavar’s team.”

PolitickerNJ.com previously reported that several Democratic sources indicated that Jeffries conversed with DiVincenzo and with allies of South Jersey Democratic power broker George Norcross III regarding his political future. These sit-downs suggest an alliance between North and South Jersey to ensure Jeffries’ victory in Tuesday’s election.

DiVincenzo declined to speak to PolitickerNJ.com on the record regarding the Newark mayoral race and the potential effects of its outcome.

But not long after the DJ played the classic song “Stand by Me” by Ben E. King, DiVincenzo told the crowd what Tuesday’s election meant to him and to Newark.

“I was born and raised in the city of Newark. I grew up on Parker Street,” said DiVincenzo, who was elected as Essex County executive in 2002. “Newark is at a crossroads. It has a $93 million dollar deficit. You need someone with the experience of running government. Shavar has that from being in the Attorney General’s office,” DiVincenzo said, referring to Jeffries’ service as a state Assistant Attorney General under the administration of former New Jersey Gov. Jon Corzine. “We’ve made great strides. But if you have a car, and you put the gear to the letter R, that means reverse. That means going back. I don’t want to go back. And the only way that we’re going to go forward is if you elect Shavar Jeffries as our next mayor. He’s a real Newarker.” 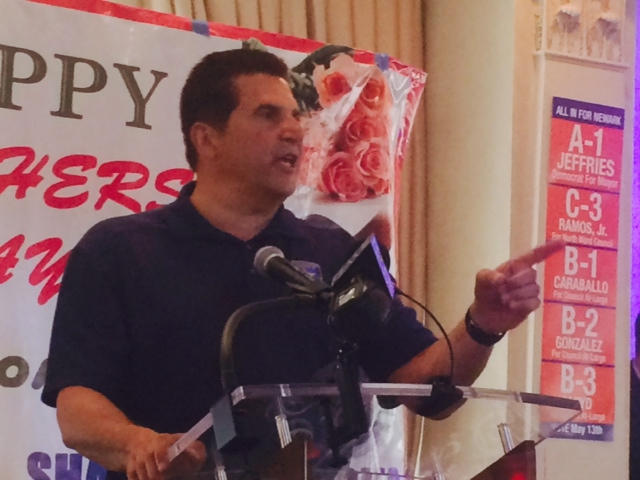