NEWARK – Newark mayoral candidate Ras Baraka, facing poll numbers that indicate rival Shavar Jeffries is gaining on him, went on the offensive on Wednesday, striking back at Jeffries and his allies in Newark’s North Ward.

Baraka has experienced an airwave bombardment from the Jeffries campaign in recent weeks. Hundreds of thousands of dollars funneled from a pro-Jeffries independent expenditure fund have financed a slew of TV commercials seeking to slay Baraka’s campaign.

But Baraka, repeatedly flashing the same V-sign used by British Prime Minister Winston Churchill during the London Blitz over seventy years ago, fired back furiously at Jeffries on the ground in a ward his opponent is expected to win.

Baraka targeted his comments at those who believe that the North Ward is Jeffries’ territory, a idea furthered by the fact that Jeffries has North Ward Councilman Anibal Ramos, Jr., Councilman-at-Large Carlos Gonzalez and former state Assemblyman and councilman-at-large candidate Wilfredo Caraballo on his slate. Jeffries is also backed by state Senator Teresa Ruiz (D-29).

“All these folks that are here are running against a heavy machine, a machine that’s been in power from decades. A machine that people all over the state of New Jersey is waiting for us to dismantle,” Baraka said, referring to the North Ward Democratic power apparatus, led for a generation by Steve Adubato, Sr., a political force that counts Essex County Executive Joe DiVincenzo as one of its proteges. “We get to do it first in the city of Newark and watch other people join us as we chip away at it, and encourage people in South Jersey to do the same thing. The irony of it is, we’re sitting here in the North Ward, talking about this in the backyard of the machine.”

Baraka received the endorsement of the Dominican Coalition PAC at the event, held at the Spanish Manor restaurant on Heller Parkway. The South Ward councilman outlined the importance of building political ties between African-Americans, who are the majority of Newark’s nearly 300,000-person population, and Latinos, a rapidly rising demographic group in the city.

“This coalition is dangerous. The first coalition that empowered Newarkers started with the 1970 Black and Puerto Rican convention in Newark,” a movement that the mayoral candidate’s late father, Amiri Baraka, Sr. was actively involved in. “A lot of people have forgotten that history. But some of us who are the children of those people are trying to continue that history. That’s the history that we need to tell.”

But Baraka, flanked by his own Latino allies, North Ward council candidate Luis Lopez, who is on Baraka’s slate, council-at-large candidate Cesar Vizcaino, businessmen and about 50 resdients, remained unimpressed. 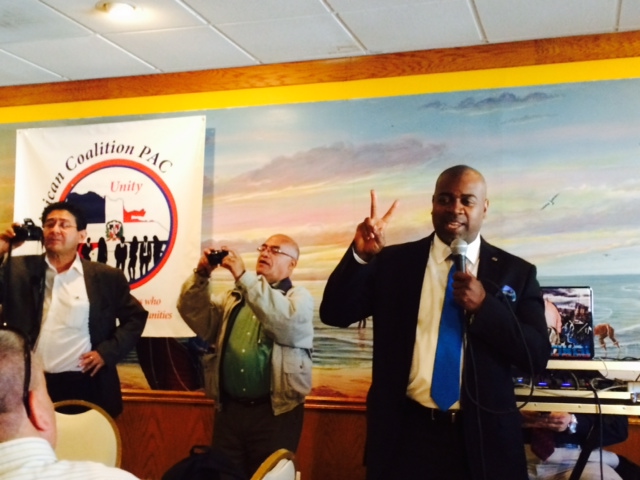