NEWARK – Supporters of rival Newark mayoral candidates Ras Baraka and Shavar Jeffries waged verbal war in the streets of Newark on Tuesday, one week from Election Day. Each fired-up side, already fueled by differences over politics and policy, burst into fury as they leveled accusations against each other.

The first salvo was fired from the steps of City Hall as the start of the business day. Chris Pernell, president of the pro-Jeffries independent expenditure group Newark First, lashed out at Baraka for she alleged were potential violations of Newark’s 2007 contractor anti-pay-to-play executive order. According to Pernell, Baraka accepted thousands of dollars in campaign contributions from companies that may have been prohibited from donating to his campaign.

“Since 2012, Ras Baraka appears to have accepted at least two prohibited contributions totaling thousands of dollars,” Pernell said, specifically detailing two contributions from companies that she claimed may have been prohibited from contributing by executive order in 2012 and 2013, respectively.

A written release issued later by Newark First detailed donations made by another company in 2013 and 2014 that the organization claims may have been prohibited from contributing to Baraka in that time period.

The total of these reported donations to Baraka adds up to $4,400.

“Newark First, and the citizens of this great, beloved city, are standing here asking Ras Baraka to give account and to explain how these contributions are not violations of the city’s ordinance banning pay-to-play contributions,” Pernell added. “Ras Baraka has a failed record on fiscal matters, and especially during constrained financial times, we cannot trust the finances of our city to a failed, status quo politician.”

Pernell was backed up by a wall of approximately 30 people all holding variations of the orange Jeffries campaign signs seen around Newark. But those standing on the steps of City Hall were not unchallenged by Baraka supporters walking by on the sidewalk.

“Stop talking money from Wall Street!” yelled out one man, who was wearing a pro-Baraka tee shirt.

“Ask him what the date is,” spat back a Jeffries supporter from the steps.

After the Newark First news conference ended, the rhetoric between the competing groups of Baraka and Jeffries supporters grew heated.

Into this volatile mix emerged Bishop Timothy Pernell, the brother of the Newark First president. Dressed in a checkered jacket, white shirt and black bow tie, Pernell held up an IPad showing an email that he claimed was the transcript of a controversial video featuring Baraka.

Pernell told PolitickerNJ.com that he helped to make a series of videos featuring Baraka speeches dating from before he successfully ran for South Ward councilman in 2010.

Pernell asserted that Baraka made anti-Latino comments in the video. He pointed to a section of what he claimed was a transcription of the speech from the video as proof of his claims.

The Newark First rally broke up amidst a chorus of catcalls as both sides continued to argue.

An hour later and less than two miles away, the Baraka team assembled in front of their Central Ward headquarters, the site of the Baraka campaign bus burning in February. Two men allegedly involved in the arson incident who worked for the Jeffries campaign were arrested last month.

Baraka stepped up to the podium with a large chart by his side. Using the chart, Baraka, on leave from his job as Newark’s Central High School principal, then tried to take the Jeffries campaign to school about its own finances.

The Newark First report shows contributions of more than $1.3 million dollars to the group during the last funding period.

The largest contribution to the pro-Jeffries Newark First group came from another group, Education Reform Now, who donated $850,000.

On the group’s website, Education Reform Now defines itself as an organization in which “policy objectives are built around strengthening innovation, public charter laws, accountability, high-quality new school development, transparency on finance and student results, and best practices for turning around low-performing schools.” Members of the group, including board members who have experience working at high-powered Wall Street hedge funds, are active in the Success Academies network of charter schools.

The question of the role of charter schools has become a critical part of the debate regarding the future of Newark’s schools, a fight made sharper by the controversial One Newark school reorganization plan, announced by Newark School Superintendent Cami Anderson in December.

“Councilman Baraka’s performance today is the height of desperation,” responded Jeffries campaign spokeswoman Lupe Todd in a written statement. “After seeing the latest poll, this is a desperate attempt to distract voters from his failed record as a councilman in the South Ward. Next Tuesday, voters will elect Shavar Jeffries because he offers real solutions to reduce crime, create jobs and revitalize neighborhoods. Shavar Jeffries will be a mayor with the courage to take on big problems and old politics to bring real change that moves this city forward.”

Baraka defended himself from Newark First’s accusations that he could have violated Newark anti-pay-to-play executive order.

“The law actually says that if you donate above the $300 threshold, then you can’t do business with the city for a year. It also allows organizations to donate $300 per candidate to a team account,” said Baraka, who said the donations in question went to a team account. “We have not violated any laws whatsoever.”

Baraka also spoke out against assertions that he made anti-Latino statements in the series of videos that were made with the help of Bishop Pernell, calling the videos “doctored.”

“I was speaking on the street against gang members who had killed a person in the neighborhood, telling them that they are meeting uselessly,” Baraka said. “They used that rant against gang members to then switch it to make it about me being against the Latino community. It’s completely false. Any [independent expenditure] group is supposed to be involved in other things, not just be created to be against me.”

As the Baraka press conference seemed to be drawing to a close, Pernell suddenly appeared, striding down Central Avenue with several allies towards the podium. He appeared to be trying to show the aforementioned video once again, this time to a larger media assembly.

But Pernell never made it to the podium.

Faces hardened on both sides. Eyes were ablaze with anger. Shouts rang out from vexed throats. It took at least half an hour for the tumultuous street scene, perhaps a harbinger of the heat to come, to simmer down.

“How much did they pay you, liar?” one Baraka supporter yelled.

“We don’t get paid, I live in Newark,” answered one of the people surrounding Pernell, who was soon surrounded himself by a swarm of angry Baraka supporters.

But in the midst of the chaos, Baraka saw an opportunity to make a political point, and he took it without hesitation. 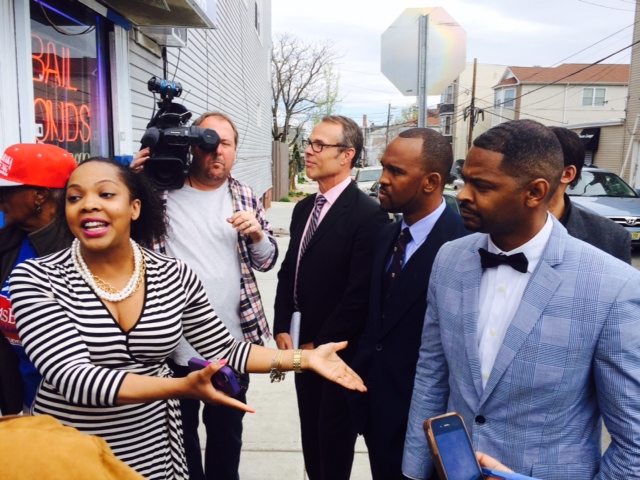