NEWARK – Ten Newark public high school students met with acting New Jersey Department of Education Commissioner David Hespe and Newark School Superintendent Cami Anderson on Tuesday to express their concerns following a series of protests regarding the future of Newark’s schools, including an overnight sit-in last week. The students left their 45-minute meeting, arranged after the sit-in, with the same feelings that led them to an act of civil disobedience: dissatisfaction, disrespect and disgust.

“Through the meeting, there was a lot of dialogue, and we were able to get out the most important thing – how our students are being affected by the One Newark plan,” said Kristin Towkaniuk, president of the Newark Students Union, at a press conference in Newark following the meeting, which was also attended by Rashon Hasan, the chair of the Newark school advisory board. “From there, we were able to have a conversation about our demands. Our demands included the immediate removal of [Newark School] Superintendent Cami Anderson, the halt of the One Newark plan, the implementation of the Newark Promise plan and to be on the transition committee to pick the new superintendent.

“Our demands were not responded to. They were kind of brushed to the side,” Towkaniuk added. “It’s really important in the community that everybody knows that the Newark Students Union will not give up. Because our demands were not met this time doesn’t mean that we won’t continue to have protests. That doesn’t mean that we won’t continue to have conversations like we did with Commissioner Hespe. We look forward to continuing this fight until we reach a point in Newark’s public schools where we feel satisfied.”

The timing of the introduction of the One Newark plan, which came just at the start of the 2014 Newark mayoral campaign season, poured gasoline on Newark’s already volatile politics and served as a rallying point for many supporters of Ras Baraka, a teacher and Newark public school principal, who won the Newark mayoral election earlier this month.

The Newark Promise plan, an alternative school reorganization initiative which is being promoted by the Newark Student Union and other activist groups, calls for the return of local control to the Newark school system, improvements for school district facilities and less focus on the results of standardized tests, among other things.

The goals of a student sit-in last week at Newark Board of Education headquarters called for the termination of both the One Newark plan and Anderson. One student goal was achieved: Tuesday’s meeting with Hespe, who told students that he could be contacted for a follow-up meeting.

Yet the students, who said that there were planning on other acts of civil disobedience in the future if their demands are unfulfilled, felt that the escalation of student demonstrations could be necessary.

The students’ anger also escalated after reported comments made by Anderson that adults put the students up to their ongoing protests.

“It’s utter disrespect, to be honest” Towkaniuk said. “She thinks that students don’t have a mind of their own. It’s disgusting. I was furious.”

“The goal of today’s meeting was to discuss the need to balance the superintendent’s and the board of education’s right to hold public meetings and to thereby assist students, with the right of the students and other citizens to be heard,” the statement reads. “We believe it is crucial for community stakeholders to be given the opportunity to have input into important education issues, and to have education officials answer their questions.” 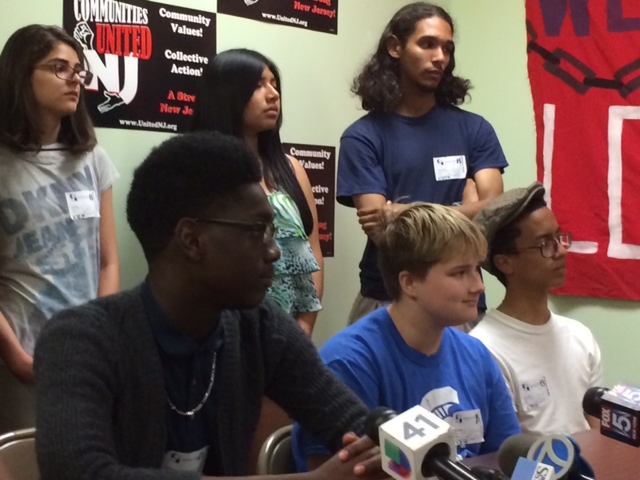