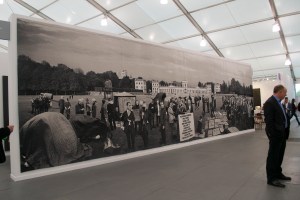 Well, not the real Noam Chomsky, as far as I know, but the political philosopher does appear in a really impressive tapestry by the artist Goshka Macuga at Andrew Kreps Gallery’s Frieze booth. It’s a large pastiche that takes up an entire wall and features several scenes woven together: the artist receiving an award at Documenta, where the tapestry appeared, in front of an audience of real-life personalities–collectors, curators, dealers and Andrew Kreps himself, tucked away in the middle of the crowd. (“I’ll just point this out, I’m in this,” Mr. Kreps said proudly.) Mr. Chomsky is seated off to the side of the podium.

Depicted elsewhere is an Occupy Wall Street protest, the participants holding placards with messages like “Democracy is an illusion” and “Chomsky for President.” One particular sign, at basically the center of the work, stands out: “The private bankers, politicians, global elite, and mass media are lying to, laughing at, stealing from, brainwashing and destroying you and your family.” Not exactly the message one would expect from an art fair that is currently moving a great deal of merchandise and money. (Ms. Macuga’s piece, as of this writing, is on reserve for $230,000, Mr. Kreps said.)

Elsewhere in Mr. Kreps’ booth is a photograph of stationary from the Standard Hotel that reads, “Dear Guest, As a reminder please be aware of the transparency of our guest room window. When the curtains are up, any activity in your room may be visible from the outside…”

Funny, that’s pretty much how everyone feels at an art fair, too.