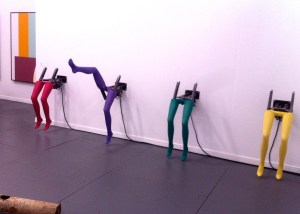 Art fairs may be existentially painful, but rarely do they cause much bodily harm beyond headaches and blisters. At the booth of Copenhagen’s Galleri Nicolai Wallner, however, the hazards are higher. Four sets of robotic legs, mounted on the wall in a row and wearing colorful stockings, take turns Can-Can-ing skywards. “A guy got kicked in the balls,” Mr. Wallner told a thoroughly startled looking man, who had nearly met the same fate.

Mr. Wallner had been telling Gallerist about the piece, All the Possible Combinations of Eight Legs Kicking (One at a Time) by Jonathan Monk, and its humorous marriage of feminine and mechanical elements when the unsuspecting fairgoer began backing closer and closer to the legs for his friend to take a photo. Farther! Farther! The friend gestured. Mr. Wallner practically ran across the booth to intervene. Crisis averted, he returned to tell us more about the work, which feels a bit like a futuristic American Apparel ad. Was the guy who got kicked angry?