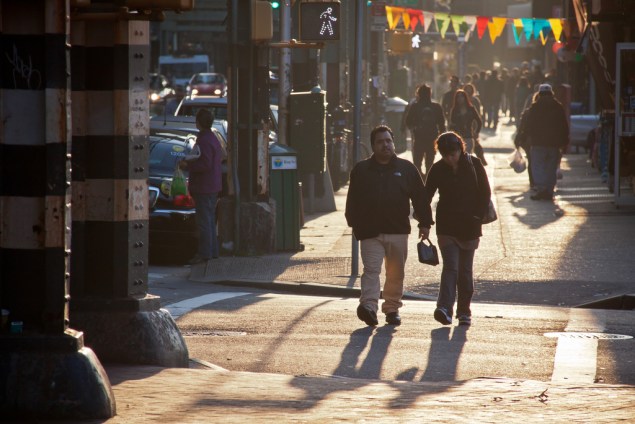 The city has issued an RFP for infrastructure work at Hunter’s Point South, Crain’s reports, laying the groundwork for the final stage of a mega affordable housing development initiated under Bloomberg, which will entail the construction of 3,000 additional units designed by ODA.

Talks between Peebles/North Shore-LIJ and SUNY have broken down, Capital New York reports, with the deal falling apart over disagreements about who should pay for potential environmental remediation and emergency care during the transition. Now SUNY will begin negotiations with third-choice bidder Fortis, who was poised to ink a deal in December that community advocates nixed as not providing adequate care.

Once there was a time when the priced-out settled for Long Island City and Astoria. Now, they’re settling for Woodside, The New York Times reports. “We work a lot in Astoria and Long Island City, where a lot of people have been priced out,” a broker told The Times. “We found they’re willing to go to Woodside. If you’re getting the same type of apartment that you would find in Long Island City and it’s $1,000 cheaper, you’re going to be willing to move.”

In defense of the quaint and old-fashioned, Robert A.M. Stern is once again to the rescue! The non-starchitect has taken to championing garden cities, The Atlantic Cities reports, making the eminently-reasonable point that not everywhere can or should be like Midtown Manhattan.

Crain’s reports on the mostly peaceful co-existence of old-timers and newcomers in Greenpoint’s retail landscape, where retailers of older vintage are endeavoring to meet the needs of hipsters. However, as copacetic as things currently seem, it’s difficult not to see the balance as a fleeting one. As Crain’s writes, “two things are certain”; that “over time, the Polish community will shrink and rents will rise.”

Blast from the past: Andrew Sullivan, who so hated “New York Shitty” after moving to the city in 2012 that he promptly fled back to D.C., has not warmed to the city with time and distance, Gothamist reports. In fact, his loathing remain so strong that he has taken to trashing the New York even during his visits, complaining about bad cab drivers in Brooklyn, a Airbnb rental next to a construction site, even the internet service.