For a television show with an abundance of edge-of-your seat moments, Orphan Black truly outdid itself with “Governed as It Were By Chance.” I continue to be in awe of the skillful pacing on this show, how these sudden bursts of violence or shock come between quiet interludes: Cal and Kira slowly getting to know one another as father and daughter; Cosima becoming more obsessed with watching Jennifer’s death tapes; Siobhan reconnecting with an old flame. (The showrunners of the often distractingly dull The Walking Dead should take note.) And when the violence comes, it comes fast and hard. Like being hit by a speeding truck.

The truck, it turns out, was driven by Cal, who rammed Daniel’s car to save Sarah. So she’s escaped from him once again, and not for the last time in this episode. She takes his gun, thinks about shooting a cop for basically no reason, and then returns the gun to Daniel, whom she thinks is dead, again for no reason.

Seriously, doesn’t anyone on this show know how to check for a pulse? Haven’t any of them ever seen a TV show? Just in this episode, we have Sarah just assuming Daniel died, Gracie just sort of poking Helena a little after trying to suffocate her and getting her lights put out for it, and then Sarah being totally shocked that Helena is still alive after she shot her in (what she thought was) the heart. A couple of fingers on the neck really could have saved everyone a lot of trouble.

But trouble is the name of the game here, it seems. All of our lovely clone sisters (“They’re new,” Kira adorably explains to Cal) have gotten themselves into their own fine messes once again. So herewith, our roundup of Clone Club ranked by how totally f**ked they are.

Rachel: She thinks she’s in control, but it turns out that at least two people are playing her, Daniel (with Leakie’s collusion) and Sarah. And right now she seems to have no idea. Conspicuously offscreen for the entire episode, Rachel is still a sort of black box, but we now know that despite her cold personality, she actually had a loving childhood. And we learn that the Dyad is not as much under her control as we—and she—have been led to believe. She’s a clone, after all, and thus part of the same screwed up experiment as the others. Whether such information could shift alignments, we’ll have to wait and see.

Alison: It is telling that our lovely and amazing suburban housewife being in rehab is actually the least screwed-up thing happening to any of the clones.  I mean, yes, she embarrassed herself in front of a lot of people, she has to pee in a cup, and she may lose custody of her kids. But in the long run, she’s doing better than most, Donnie the incompetent monitor notwithstanding. Maybe she’ll get to stick it to Dyad after she gets out of there and gets her kids back. Plus, she has Felix for support. And what an amazingly supportive friend he is being right now. God, I love these two together. Sarah driving him way was the best thing that ever happened to Ali.

Cosima: Science girl was mostly window-dressing in this episode, only getting her own very short scene in which she is once again watching herself die. Which: she’s dying. Slowly and it looks like pretty painfully. Maybe there is a cure around the corner, but since Jennifer croaked only a few days ago, clearly the Dyad isn’t making excellent progress. Prognosis: ungood.

Helena: The ultimate survivor, Helena can never really cause us too much concern, can she? This is the woman who dragged herself half-dead into a hospital. And now she fakes her own death, chokes out a teenager, outruns men with guns and finds her way, presumably many miles on foot, back to her sister—all while recovering from medical sedation. Ain’t nothin’ gonna bring this girl down.

On the other hand, she’s been impregnated and then had the zygote removed to be raised in a test tube by a scary religious cult. And they likely now think she is an evil bitch who tried to kill their (murderous) kid unprovoked. Also, she’s a multiple murderer, is covered in blood, and has twigs in her hair.

Sarah: And lastly, we have our protagonist. Out of the frying pan and into the fire, then into progressively bigger fires. That’s just how she rolls. In and out of Daniel’s custody twice, until finally he has her tied to a shower nozzle and is about to slice her up—but not kill her, as he has orders not to. But then Helena…um, saves the day, I guess, killing Daniel. Except that she is under no such orders. And holding a dripping, bloody knife, slasher-film-style. And talking her usual non-stop spigot of Slavic-accented craziness.

Sure, that craziness seems to be focused on how Sarah is her sister and they’re going to be a family, but predictability isn’t this one’s strong suit, and the episode ends with one of the weirder loving hugs I’ve seen, Sarah still tied to the shower nozzle, Helena still in a bloody wedding dress with twigs in her hair. (Did anybody else find this whole aesthetic weirdly gorgeous? Or do I just like morbid 19th century art too much?)

How f**ked? Frankly, I’d be giving her a 10/10 here, but since she’s the hero of the show, she’s going to live through this ordeal, as she has managed to escape every other, by dumb luck. In this case, because Helena has a soft spot for one clone. So: 8/10, with a bullet.

After watching the last few episodes of Orphan Black, perhaps you find yourself somewhat confused about the hierarchical structure of the Dyad Institute? Not clear who is really in charge? Turns out you’re not alone: seems like everyone who works there is pretty baffled by it too. You’d think a gigantic public company would at least have an org chart.

Rachel says she “essentially outranks” Leekie, whatever that means. Leekie clearly doesn’t agree—understandably, considering he’s the director of the Dyad, and she’s one of the Dyad’s clones.

It turns out Rachel does have a monitor. But she submits to it willingly. (He’s just basically just a bodyguard, then, so why bother calling it monitoring?) And the question of who outranks whom seems to hinge on what kinds of information Rachel’s monitor gives Leekie. Which goes some distance toward explaining why normally cold Rachel seems really into screwing her monitors.

The effects of her previous monitor Daniel’s extremely well-timed murder last episode ripple all throughout this one: Paul is promoted to monitor and weird sex slave and becomes Rachel’s ruthless right hand; Sarah starts bonding with Helena after she saves her life (or as much bonding as a guarded street rat and a murderous psychopath can really make it through), complete with affectionate nicknames—“meathead” for Helena and “brother sister” for Felix—and tearful confessions of love; and the Dyad decides to stop playing nice and force Sarah to come in (along with Kira and Helena) by framing poor Felix for murdering a police officer, arresting him just as he’s about to get it on with totally adorable medical examiner Colin.

I was wondering how long it would take for the Dyad to get around to this. I mean, Sarah has been escaping their grasp for months now, and Kira has been constantly protected, but Felix (and his ass cheeks) have been out in the open this whole time. Why didn’t the Dyad decide to exploit vulnerable Felix as soon as Sarah blew them off and refused to sign their deal?

In any case, Rachel’s plan works. Not quite the way she intended, but at least it makes Sarah stop Helena from taking Rachel out with a sniper rifle, which would have doomed Felix forever. And though Sarah is clearly not exchanging herself and Kira for her brother, she does uncover some good information to trade: the “swan man,” a.k.a. Dr. Ethan Duncan, one of the originators of the clone project, presumed burned to death all these years, is alive. Which, considering the fact that the Dyad totally lost the key to making clones in that same fire, is, well, pretty damned important.

So Sarah is going to track Duncan down for Leekie, a pursuit that Leekie wants to keep close to his vest as insurance in his now-evident tug-of-war with Rachel. As part of which, he also goes behind Rachel’s back and treats Cosima for her clone-related respiratory illness. Because he believes in the whole “more flies with honey” approach, as opposed to the scorched-earth tactics Rachel seems to be favoring nowadays.

You know who else is not really interested in playing softball? Henrik Johanssen’s merry band of Proletheans, who as punishment for remaining silent about her attempted asphyxiation of Helena, sew Gracie’s mouth shut until she agrees to talk. It is gruesome and awful, but as far as I can tell, the only purpose of these extended scenes is to tell us that this kinder, gentler version of the Proletheans is still pretty hard-core. That, and to explain that their goal is to have Helena carry the baby to term—but if that is the case, why extract the embryo in the first place? Did they alter it in some way? Regardless, now Grace is charged with finding Helena, or else they’ll make her carry the child instead.

The other effect of all this time spent down on the farm is that the episode had no time to check in with Alison stewing in rehab, and it felt poorer for it. Ali isn’t just our comic relief, she’s also the most relatable of the clones, and her absence robs Orphan Black of a humanizing element. At least spooky, spooky Kira is seen drawing a picture of her “Aunt Alison,” so we can all remember what we’re missing.

Whatever is going on with that kid, it is starting to scare me. Now she can hear people approaching the RV before they get there? She knows way too much for a little girl, and it is verging on superpower territory at this point. And now that we’ve seen Cal’s gun—or is it Chekov’s—we should brace ourselves for how it is inevitably going to have to be used. 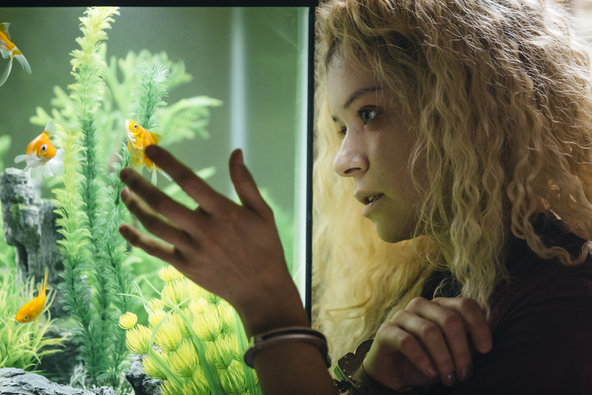