Unsurprisingly for a show about doubles, Orphan Black is quite fond of the two-shot. Two faces in one frame, side by side, facing one another, or otherwise occupying the same space. And Saturday night’s episode was basically a master class in the two-shot, giving us a range of such pairings, all unlikely odd couples whose meetings are fraught with cross-purposes and hidden motivations. Sarah and Helena; Alison and Vic; Art and Felix, etc.

Interestingly, only the first of these pairs is a clone vs. clone situation, and while possibly the most fun to watch, it is not necessarily the most intriguing or complex. It does give us yet another opportunity to marvel at the near-miracle of Tatiana Maslany’s acting—as there is not a moment when we do not believe that this is Helena annoying Sarah with her singing, and suddenly realize that this is Maslany singing to Maslany wearing a different wig, in a different shot.

But mostly the scenes with these two just confirm what we already know: there is a bond between them that they cannot fully explain, but Helena is far too damaged to be trusted. And Sarah is not what you’d call the trusting type.

This season is all about the clones becoming more and more fragmented, and thereby realizing, as Sarah says, that they’re stronger together. So it makes sense that this is the only clone pairing in the episode, and that the twins are once again divided: Sarah leaves Helena in the car while she goes to find the records of the clone project in a creepy church basement, and they lose track of one another.

Left to her own devices, Helena gets into all sorts of trouble in a local saloon, including finding herself a “boyfriend” (played by that guy from Suits) and then beating up a whole bunch of rednecks. And while this plays out, we get our second pas de deux, between Paul and Mark (he’s the creepy Prolethean with the Hitler Youth haircut), who have both been tailing the couple, though each is after a different sister. It’s a strange little bad-guy summit, tense but shot through with a clear mutual respect. These are both well-trained soldiers, and they both know it. They agree to each take their own clones and go on their merry way.

Leading to our next odd pairing: Helena and Grace, who visits her in the police station under the pretense of being her “sister.” Again, two people who would seem to have little or nothing in common find a strange little common ground, both having been raised by abusive religious sects. Grace tries unsuccessfully to hide the scars of her recently sewn-shut mouth, and Helena tells her, from experience, that they will heal. To her credit, Grace doesn’t lie to Helena: she still thinks the clone is a monster, but she will do her father’s will. And Helena is swayed, because all she really wants is a baby, and Henrik will apparently give her that.

Then we have Felix, who is paired up with Art. The cop arrives at the loft with that treasure trove of scattered files and terrifyingly defaced photos that he and Sarah discovered in Maggie Chen’s storage unit last week, to find Felix drunk and miserable. Art puts him to bed and wakes him up with coffee the next morning. Felix: “You’re the best date I’ve had in years.” Aww, they’re the cutest.

Based on Sarah’s research in the church, Art tracks Doctor Ethan Duncan to a house a few hours away, where Sarah drives and finds…Mrs. S. Who, it turns out, has been hiding the good doctor this whole time, because he’s actually a good guy. Guess who’s the real bad guy? Mr. More Flies With Honey himself, Doctor Leekie, who apparently killed, the other Doctor Duncan, Susan, and took Rachel away from her loving adoptive parents to raise her as a soulless proclone. Just when you think you know a guy…

While Sarah and the man who apparently made her—who is now an old codger who just loves feeding his birds—are butting heads, Siobhan takes the opportunity to go confront Paul (the proverbial shit Sarah brought stuck to her shoe) and offer him the chance to play Dyad double agent. We haven’t yet heard his answer.

But speaking of spies, here comes our final pair: Vic the Dick and Ali the Alky. What a compelling duo. TV shows really love to set scenes in rehab, because you get this interesting leveling effect. All of a sudden the soccer mom and the drug dealer are on precisely even footing. Not that Alison realizes this, at least at first: look how she stands over the meditating Vic, bouncing a basketball.

(Brief aside: You can really learn a lot about the interactions of these characters by the way each of their two-shots is framed. Notice how Art and Felix are also filmed standing/sitting, but they switch places. Paul and Mark sit side-by-side, facing away from one another. And Helena and Sarah lie down facing one another, but Sarah immediately turns over and they sleep head-to-foot, forming a beautiful overhead shot, a sisterly yin-yang. This repositioning seemed a little cold of her, but you can’t really blame someone for not wanting to fall asleep staring into her own face.)

But Alison learns to eat crow and face Vic like an equal. Just in time for us to find out that he is a plant by still-in-the-dark Detective Angie, sent to spy on Alison for her. Despite this duplicity, his sobriety and his newfound Buddhist faith seem quite sincere, and he clearly feels bad for what he’s doing to Ali.

Like its proliferating clones, Orphan Black propagates new storylines: it started with just Sarah’s story, but now we’re following seven or eight geographically separate characters. It has finally reached the point where we simply can’t check in with all of them every week. Alison did not appear in the last episode, and in this one both Kira and Rachel are conspicuously absent. The two arer united by Ethan Duncan’s assertion that what they were after is “little girls.” Like Kira, Rachel was also once a child ripped away from her parents as part of a conflict she couldn’t possibly understand.

And it appears now that the stem cells that Doctor Leekie is using to cure Cosima (the only clone without a unique pairing this week; she and Delphine just continue to be boring lesbians in lab coats some more) were taken from a “relative” of the clones. Meaning that somehow the Dyad has gotten its hands on Kira’s baby teeth and is injecting them into clones’ uteruses. You know, just in case things weren’t creepy enough. 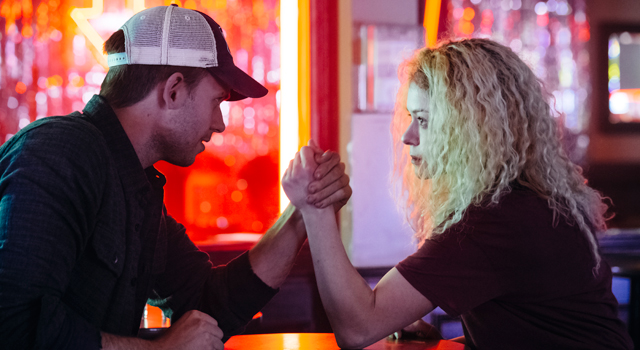