Happy to be free and so grateful for this second chance. Can't wait 2C @JSJdarling at dinner. #frenemy pic.twitter.com/AJwvtPcyFf

Is he ready for Beliebers and cronuts?

After spending 17 years in jail for manslaughter, former New York City Club Kid Michael Alig turned to Twitter today to spread the “good news” that he was free.

But leaving jail might not be quite what Mr. Alig bargained for, if his tweets can be believed. As we all know, the world has changed a lot since he looked like this:

In an open letter, friend and former club kid James St James assured his pal that he hasn’t lost his New York City street-cred, but that 2014 is a scary, scary place.

“Speaking of clubs: You’ve become a bit of a legend since you went in (YOU’RE WELCOME) and you WILL stop the room the first few times you go out,” Mr. St. James wrote in the candid letter published on the Wow Report.

Mr. St James also couldn’t help himself from throwing in references to the past.

“See, you’re old now, and although many of this generation were raised on Party Monster , sometimes you’ll find yourself in a room where everybody is completely CLUELESS. They’ve never seen the Geraldos or Phil Donahues or Jenny Joneses. They’ve never heard of Angel,” (Angel being Andre Melendez, the victim he killed 17 years ago).

Though we know for a fact Mr. Alig embraced many of these sites even while behind bars (he amassed an impressive 11.6K Twitter followers), he still seems a little behind…

@Christiane_777 @KEoKiKeOkiKEoKi oops I screwed up! I miss u! When r u coming to nyc? Yes ! I’d love an iPhone!

OH. There is ONE drug that you really OUGHT TO TRY. You’ll just love it, I know it.NO SIDE EFFECTS. And NO ONE WILL EVER KNOW you’ve done it.It’s called krocodil.Really, Michael, I’m just going to get a tiny, little gram of krokodil as a getting out present…. Thank me later.

We’ll see if he accepts the generous offer, but for now Mr. Alig seems content with a Starbucks double espresso and a “CincoDeMichael” burrito.

Who needs coke when u can get a caffeine jolt from a Starbucks double espresso? #drugfree pic.twitter.com/Di707zRzSz 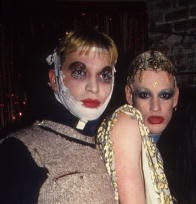