PATERSON – The rain fell on the city.

In a battered headquarters downtown, a lone figure sat with his back to the door and a cord dangling from his ear.

“Este es Rigo Rodriguez,” said a voice emanating from the mouth that faced the wall.

He was alone in the room, but for another man crunched against another wall on another phone.

“Poor Rigo,” is the assessment of rivals in this mayor’s contest, as if the retiring at-large councilman’s present condition of living under an indictment for voter fraud while running to serve as the city’s chief executive makes him more a candidate for sympathy than mayor.

But he says, doggedly, he’s going to win.

“They have the elite,” he said. “But they don’t have the street.”

“I made Torres,” Rodriguez announced in the spare room. “I was going to run in 2010. Joey begged me not to run. Joey needed the Dominicans to win.”

Rodriguez claims his people will stay with him on Tuesday, and the voters in his community will catapult him into the mayor’s chair.

“[Dominican School Board Commissioner] Alex Mendez is the Benjie Wimberly of this election,” he said, reflecting on popular recreation director Wimberly’s campaign effort propelling a black mayoral candidate into office four years ago.

At-Large Council candidate Mendez has that vibe now, Rodriguez said. The Dominican vote will be big in five days, and Rodriguez will ride it to power.

Across the river, uptown in the 2nd Ward, rival candidate Aslon Goow heard that assessment and stared in disbelief.

“Rigo – and I like Rigo,” he began, his voice trailing.

Standing in front of a van with his face on it, the candidate said he plans to win, an assessment deemed no less delusional than Goow’s perception of Rodriguez by the man who twice beat him for the 2nd Ward council seat.

Councilman Mohammed Akhtaruzzaman says half the 1,700 voting-member Bangladeshi community will be with him in support of Council President Andre Sayegh on Election Day.

“I made Akhtaruzzaman,” Rodriguez had told PolitickerNJ earlier in his headquarters.

But since his troubles in the 2010 voter fraud case, the Dominican councilman has slipped among Bangladeshis and Akhtaruzzaman says he has corralled support for Sayegh. No, it’s not entirely organic. He concedes Rigo will receive about 25% of the vote among those voting members of his community.

Now the party and Sayegh have to find the rest in a quest for an estimated 7,000 votes and the win. With incumbent Mayor Jeff Jones wounded, they are working hard behind Currie and Assemblyman Benjie Wimberly (D-35) to secure African-American support.

The churches will get hit hard this Sunday, sources in the city agreed.

Tonight at a campaign rally at the Bonfire, the candidate unfurled another black political name on his team, while the street buzz gurgled everywhere.

Spags backs Sayegh because he wants to be police chief again, so runs the buzz. Spez wants out of Alabama, so he’s backing the opposition to land a job as top brass for Torres. No, argue others, Jerry don’t want to come back, he just wants to stick it to Passaic County Democratic Committee Chairman John Currie.

Back at Torres HQ, the mood was friendly but businesslike.

Everyone thinks he can win, or says so anyway or, as is the case with retired Passaic County administrator Maria Teresa Feliciano, has a playfully supernatural self-image.

But most people observing this contest see Torres v. Sayegh at this point.

“He’s strong,” Dominican political activist and business owner Elsa Mantilla acknowledged of Torres. “But Andre’s going to be our next mayor.”

This afternoon, Torres was on the trail with Peruvian confidant Omar Rodriguez.

On the streets, a mailer spat into the street this week by the campaign of long-shot mayoral candidate Dave Gilmore, who’s friendly with Torres, tags the Sayegh Campaign.

Specifically, the race-baiting piece links Sayegh to Pascrell allies like Frank Pallone and Hillary Clinton while Xing out President Barack Obama and incumbent Mayor Jeff Jones and asserting “our race is not good enough for Pascrell.”

He pounded on some doors with his chief political benefactor Pascrell.

In the evening, after appearing together at another campaign event at the Brownstone, the pair staggered their entrances, with Pascrell bolting in first to “Happy,” and a crowd sufficiently roused by Manny Martinez for Sayegh’s animated jog-in a few moments later.

It was a reference, of course, to Torres.

The crowd took up the chant.

Sayegh stood at the front of the room with Councilman Julio Tavarez from the Dominican community, Akhtaruzzaman from the Bangladeshi, and African-American Councilman Ken McDaniel.

Tavarez and Aktaruzzaman have backed Sayegh from the start of his campaign.

Now McDaniel stepped to the microphone.

“On May 13th, vote for Andre Sayegh for mayor, and Ken McDaniel for City Council,” he said amid claps. “We’re going to have a city council and administration working together.”

The endorsement comes with some political connective tissue.

McDaniel came out for Sayegh within days of Torres announcing his support for incumbent At-Large Councilman Ken Morris, Jr.

Morris isn’t formally endorsing a mayoral candidate as a simple matter of mathematics, preferring to remain unaffiliated for fear of removing himself from the possibility of drawing support from a mayoral field that includes eight candidates.

Both running for re-election to at-large council seats on Tuesday, McDaniel and Morris haven’t gotten on very well since Sayegh beat Morris to become council president.

Pursuing a return to the council presidency last year, Morris in a duel for the position with Sayegh thought he had McDaniel’s backing, then the latter backed Sayegh in exchange for securing the vice presidency of the council.

The veteran Pascrell embraced Sayegh at the front of the packed banquet hall Friday night.

“When Congressman Bill Pascrell endorsed me last week, they booed the patriarch of our county political system,” said the mayoral candidate. “Shame on them. Let’s have a round of applause for our congressman.”

“He needs a mayor he can work with,” Sayegh said. “I’m hungry for a victory.”

PolitickerNJ headed up the southern end of the Third Ward.

The first three said they don’t plan to vote.

The last gave a single name.

“If he’s a street guy, why doesn’t he fix the streets?” one of the women said.

“Torres got the message last time, when he lost,” said the man. “You see, he got complacent and we told him so. Now he understands. He won’t be like that again.”

But under the hoopla and even with Torres owning what appears to be a numerical advantage, Sayegh’s team says they don’t have to depend on Rodriguez cutting into Torres; in fact they’re assuming he won’t, as they remain quietly confident in the same micro-targeting come Tuesday that helped spring Pascrell back into power.

But Torres, running no less hard through the TV attacks, also projects confidence; and the two campaigns, by appearances at least, look like they have the instrumentation and energy to back up those claims. 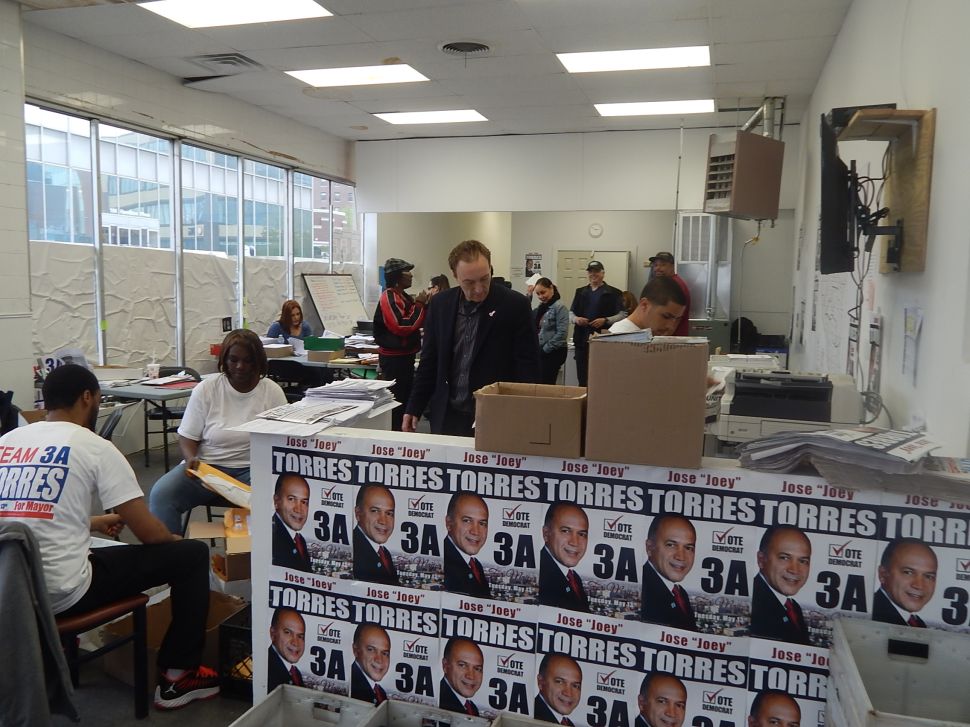