PATERSON – The Democratic Party saw the polling on incumbent Mayor Jeff Jones, and it wasn’t pretty.

The African-American leader was politically dead on arrival.

The streets said it, and the polling said it, and with former Mayor Jose “Joey” Torres come-backing, the party had to make a decision.

They implored him to run.

Wimberly running for mayor would enable the county party organization to gently but convincingly step over the wounded Jones and inspire African-American voters to get to the polls to stem Torres.

A family man, he had the pressures of family and of caring for his family. He couldn’t abandon his coaching and recreation duties if there wasn’t a hard financial upside.

Then there were the city’s finances, another matter altogether and not a good one.

He went to the Christie administration to get details about what kind of financial help he could expect to receive as mayor if elected.

The report was grim.

Wimberly decided not to run at the end of January of this year.

The party backed him, knowing the risks.

With Torres surging and Jones politically flat-lined, Sayegh had the challenge of securing his own 6th ward base and building on that by grabbing the disaffected African-American vote.

He also had to depend on forces within the city’s community-based politics beyond his control: namely mayoral candidate Rigo Rodriguez’s ability to pull votes from Torres’ Latino base.

He had problems from the outset.

First of all, former Ward 2 Councilman Aslon Goow was in the race.

The Muslim politician was already active in the 6th Ward trying to mine votes in Sayegh’s base.

So if Sayegh was depending on Rodriguez to stymie Torres, he also had to worry about Goow.

In a Latino-Majority city, Torres could lose a few votes and still have the upper hand.

Critically, he needed Jones voters to transition to him.

That would prove a problem on a short runway.

Sayegh never built a strong, organic base in the African-American community.

He never had to.

He’s the 6th Ward councilman, where Arab-Americans and Dominicans provided him with the building blocks to strengthen himself politically.

Working the phones hard behind the scenes in the black community, Currie came out publicly for Sayegh, and after a month-long attack on Torres and the former mayor’s receipt of a $74,000 severance package check from the city when he left office in 2010, the county party chairman went to party allies and urged them to pick a side in the mayor’s race.

But Sayegh needed African-Americans to back him.

But how were Wimberly and Sumter supposed to get in and endorse Sayegh when even the congressman, U.S. Rep. Bill Pascrell (D-9), whose son served as a prime mover behind Sayegh’s candidacy, remained formally on the sideline?

Convinced the newspaper headline-pounded Torres was reeling, the Pascrells finally agreed to put the congressman out there and when they did, Wimberly agreed to join him in support of Sayegh.

But the event did not occur until the end of April, just two weeks before the election.

The event, moreover, did not go well, as the Torres campaign seized on the outdoor, courtyard press conference to stage a protest against party members they said were improperly inserting themselves into a nonpartisan contest.,

In hurry-up mode, Sayegh cut a commercial with the popular congressman  and – critically – with Wimberly, that began airing with urgency, as the candidate stepped up his campaigning in the city’s black neighborhoods.

Sayegh’s worth ethic and desire impressed Wimberly, who joined him on the trail.

But the shoe-leather effort combined with an air fusillade that blended Sayegh love, 2012 optics and a repetition of criticism of Torres and the $74K question came late, with time ticking down and Sayegh trying to connect with a community that was not part of his natural ward-based purview.

Team Torres, meanwhile, was paying a lot of attention to Dominican businessmen and others in that community troubled by the fact that Rodriguez – long a citywide staple – was now under indictment and wounded politically.

A known Puerto Rican leader, Torres doggedly went after those Latino communities (Puerto Rican and Columbian included) – most avidly after Dominicans, to preserve that portion of his 2002 and 2010 base.

Torres had something to prove.

Overconfident, arrogant and elusive whenever the media was around, the mayor had snoozed through the 2010 election cycle only to wake up the next morning feeling like he had just been knocked out in a bar brawl.

He wasn’t going to make that mistake twice.

But the knock on Torres by the technicians in the Democratic organization was that he didn’t have the required sophistication to get-out-the-vote.

Torres let them think he was simply scrambling from event to event like a madman, while staunchly relying on old-pro Idida Rodriguez and going outside PassaicCounty for technical support staff who, in the final analysis, outhustled local talent to land a 3-1 Torres over Sayegh advantage in vote by mail ballots.

At one point on the campaign trail, Torres ran into Goow at a local Dunkin Donuts.

The two old enemies didn’t have to work hard to cover up past antagonisms.

Both reached for their wallets.

The two long-warring Ward 2 brand names – two street guys mutually somewhat annoyed by the Master’s Degree toting Sayegh – shook hands and turned to the donut-munching patrons – who stared up at them in disbelief.

“Be our witnesses,” the men said. “When this is all over, we will be friends.”

Saygeh was at that moment probably sweating another flight of stairs in the 3rd ward.

Anytime anyone wanted to see Sayegh he was desperately trying to make contact with African-American voters in that part of town.

On Election Day, Torres ran a prime GOTV effort. They knew where their voters were and they went and scientifically pursued them.

So did Team Sayegh.

Torres, animated, technocratic and reinforced by the raw numerical advantages of the city, hit north of 8K.

His Latino base held.

The supporters of the politically-unaffiliated top vote-getting council candidate Alex Mendez (a Dominican) and the Sayegh-backing Maritza Davila (of Puerto Rican and Peruvian descent) voted for the strongest Latino candidate.

Rodriguez was practically DOA, coming in fifth place in the mayor’s race.

Goow beat the beached whale candidacy of the mayor, cutting Sayegh in the 6th ward, the Arab-American ward, and grabbing – with a focused campaign for black votes in the 4th ward – handfuls of the same black vote that Sayegh sought.

Four years ago, Sayegh had cut Torres with a pocket of Dominican voters and lopped Arabs away from the incumbent, enabling Jones to win.

Once a friend of Sayegh’s, once convinced the rising political star would one day back him for mayor, Goow on an anti-crime message bumped out over 2,000 votes on Tuesday night, finishing a surprusing third; and in the process of losing, halted the rise of the Arab-American Sayegh.

Torres watched the numbers flood in.

At his victory party, a Puerto Rican member of the Goow team made her way through the euphoria to the winning mayoral candidate.

She offered her hand, and got hugged.

And when Torres, the victor, was close to her, he whispered amid the blare of salsa shaking the Brownstone, “Remind Goow about the handshake.” 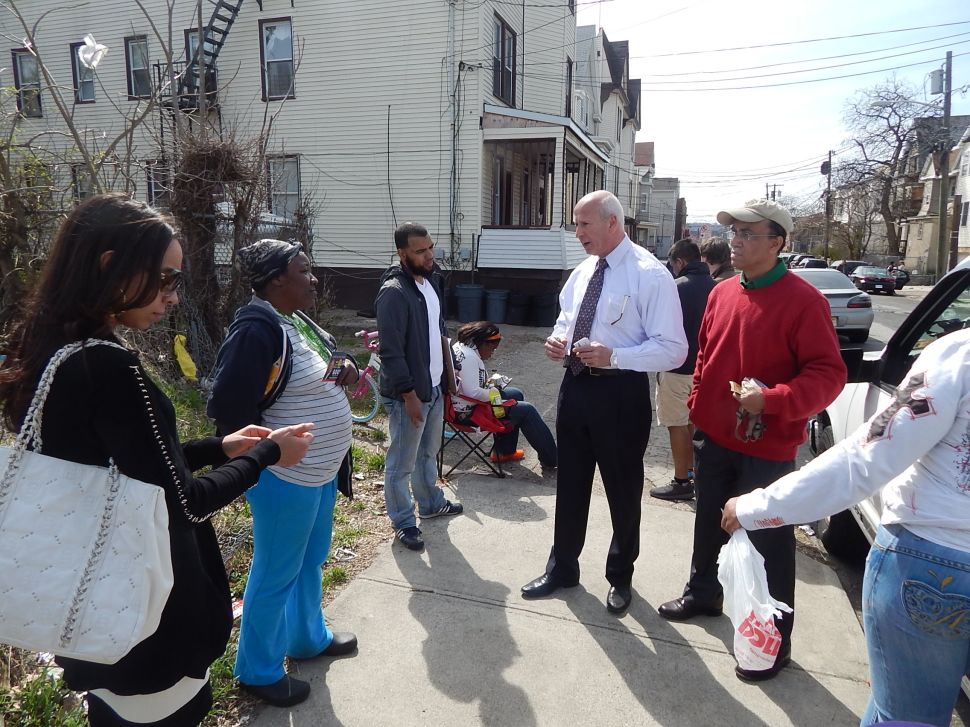