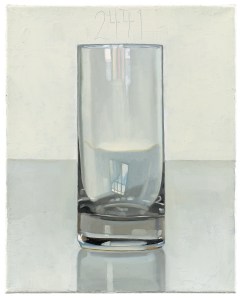 Painting the same water glass over and over, as Peter Dreher has been doing since 1976, isn’t only a conceptual gesture. (Mr. Dreher first painted the hard-edged, heavy-bottomed cylindrical tumbler in 1974, but he didn’t conceive of making it a series, which he ultimately named “Day by Day, Good Day” and which now consists of more than 5,000 panels and canvases, until two years later.) It is one, but it also turns out to be a robustly effective way to make strikingly substantial, surprisingly wide-ranging paintings. The glass rests on a gray surface against an off-white wall that ranges, depending on the day and the light, from nearly green to nearly yellow to nearly blue. The interior reflection of the gray table rises above what I want to call the horizon line; above it, in the versions painted by day, is a small reflection of a multipaned window. At night, the reflection looks more like the bonnet of an old-fashioned car. An abstract construction of loose dots and simple planes, it nonetheless reads as an almost photorealistic mimesis. The best way to capture the illusory phenomenal world is by depicting an object we simultaneously look at and look through.