Last Sunday, people were scrunched against the walls and seated knee-to-knee on the ground inside the Whitney Museum’s first-floor lobby gallery, where the composer and musician Pauline Oliveros had, in a sense, the final word on the 2014 biennial’s 80-day run. They had gathered for Ms. Oliveros’ Deep Listening Room, which had taken over the lobby for the last five days of the show. A live video stream displaying the crowd from a surveillance-camera perspective was projected, floor-to-ceiling, onto three of the gallery’s walls. Sounds from the lobby were broadcasted through speakers, which were enveloped in white cloth and scattered throughout the room. A processing system modified and added to the sounds so that you heard not only snippets of conversation from the neighboring room but also bubbling , wind chimes and a tape rewinding.

“It’s really a time machine,” Ms. Oliveros, 81, told me earlier that day, sitting in the lobby. She pointed to a microphone hanging a few feet down from the ceiling and, next to it, an eye-like camera, barely noticeable amid the similarly spherical lights. The microphone, she explained, would pick up sounds and feed them into the sound system—she’s dubbed it the Expanded Instrument System—which would delay the audio and then send it shuttling into the other room.

“What goes in at the present moment comes back in the future, but when it comes back it becomes part of the past,” said Ms. Oliveros.

Ms. Oliveros describes the modus operandi of the Expanded Instrument System as when “time has expanded to be inclusive of past, present and future.” She’s experimented with the technique for the past 50 years. The biennial marked the first time that she incorporated video into this vision. “People generally come in focused on going to the exhibits and they pass through the lobby without realizing that there is really a lot of beauty here,” she said. “I want them to see the action, the emotion, the movement, the qualities of peoples’ patterns here. I see it as art.”

She added: “People do all kinds of funny things when they realize they’re on camera.”

And, as if on cue, while Ms. Oliveros was talking to me, three teenage girls sprinted out of the installation and into the lobby right next to where we were seated. They started dancing, all the while looking back into the gallery where their images were projected. One of them, in a black-and-white checkered skirt, finally noticed us watching. “You can see us in there!” she shouted. “I know,” Ms. Oliveros said with a smile.

At the performance, she played live accordion inside the installation, improvising based on the sounds the system emitted. Eyes closed, she slid her hands across the black and white keys of the accordion. She has played the instrument for almost 73 years since her mother brought home an accordion when Ms. Oliveros was nine. (“I’m playing the lobby,” she told me. “I’m a lobbyist.”)

For about 40 minutes, she played, linking sight with sound. She accented her notes when the machine did and used pauses like Miles Davis. If the sound system emitted a high-pitched shriek, Ms. Oliveros would make her accordion do the same.

At other times, she used the instrument to create dissonance. She would run up a scale, while the machine sank down. But whether echoing the installation’s sounds or not, the accordion always highlighted noises and movements from the lobby that would have slipped your notice before.

When she finished, she kept her eyes closed and let the installation have a solo for a minute. Then she smiled and playfully threw up her hands as if to say, “That’s it.” 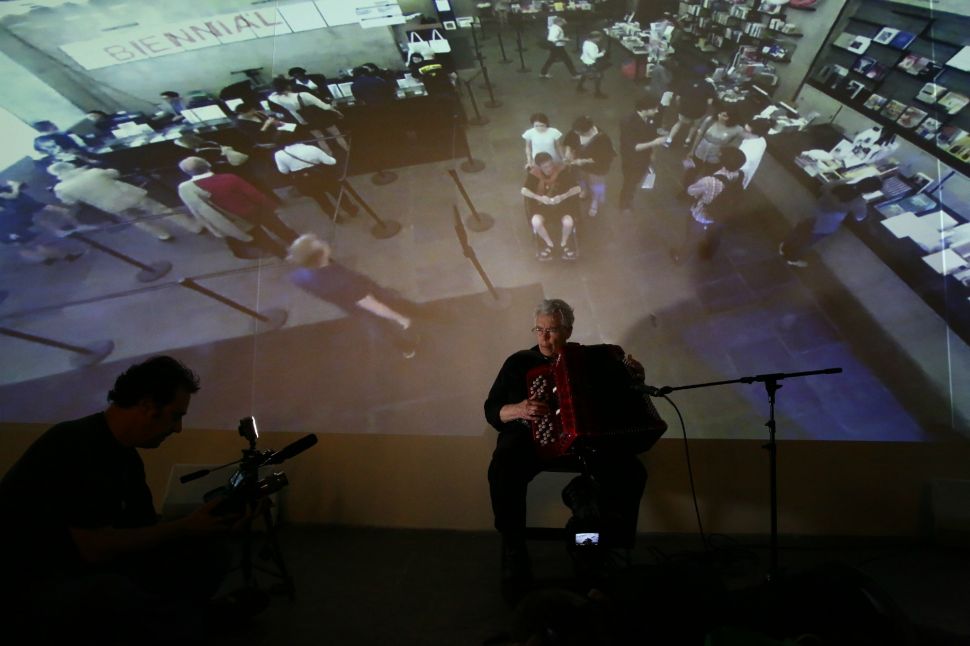