After two-and-a-half years covering New York City politics for the Observer, I’m signing off. But before I do, I wanted to salute some of the characters who make this city’s political scene endlessly entertaining to cover.

New York’s politics are unrivaled, at least when it comes to corruption, larger-than-life personalities, made-for-the-tabloids drama–or, in many cases, all of the above.

I will miss being accused of f-bomb f-bomb “betrayal” by a furious mayoral candidate. There’s that seemingly innocuous tweet which led to a relatively prominent state assemblyman freaking out and an ensuing heated argument. And cease-and-desist letters are always fun. Moments like that make covering New York politics a great gig, and I’ll be doing more of it at Business Insider, along with lots of other stuff around the country, too. Anyway, before I dash, some highlights of the past 2.5 years:

Best Puns: Senator Chuck Schumer. “This successful sting operation is sure to be a buzz kill for would-be honey smugglers,” Mr. Schumer once declared. “For too long, foreign smuggling of this product has created a sticky situation for domestic honey producers. We need a zero-tolerance policy when it comes to honey laundering.” Mr. Schumer last week warned that powdered alcohol is a figurative “powder keg … surely to become the Kool-Aid of teen binge drinking.” Soldier on, senator!

Best Dressed Pol Accused of Corruption: State Senator Malcolm Smith. Mr. Smith, a Queens Democrat indicted by federal authorities for allegedly trying to bribe his way into last year’s Republican mayoral primary, deserves props for his impeccable sense of style. He can often be spotted sporting bow ties and suspenders as he maintains his innocence about town. Mr. Smith also earns points for holding a Times Square press conference dedicated to calling out Lil’ Wayne for saying he doesn’t like New York. Good luck in your re-election, senator.

Best Response to a Request for an On-the-Record Comment: Then-Assemblyman Rory Lancman’s congressional campaign, asked about one of his rivals suddenly dropping out and being replaced by a new, previously unknown candidate, simply sent the Observer a YouTube link containing a famous scene from Zoolander where Jacobim Mugatu, played by Will Farrell, declares, “I feel like I’m taking crazy pills!”

Best Facebook Page: Former Councilman Peter Vallone Jr. Mr. Vallone, whose social media missives have been the subject of many Observer stories, presents great, unfiltered commentary to his many Facebook friends. “so since i cant see jeremy lin on cable because MSG wants a 53% increase, i did the next best thing and took my daughters to applebees last night and had the ‘sizzling asian’ special,” he once wrote, for example. Honorable Mention: State Senator Diane Savino. Writing on Facebook about a possible plastic bag tax, she slammed the “half-assed, feel good, limousine liberal approach,” adding, “there i feel better now.”

Best Press Release: Councilman Jumaane Williams, who once rolled out a faux-announcement declaring that he had joined the New York Knicks. “It will be far easier to win an NBA championship than to convince Mayor Bloomberg to restore budget cuts to our youth and seniors,” Mr. Williams said in the release. “The Garden may be missing ‘Linsanity’ over the next several weeks, but I hope to bring some ‘Jumaanity’ of my own.”

Testiest Mayor: Michael Bloomberg. The former mayor called one Observer question “outrageous,” and on another occasion declared to this paper, “Your smirk shows you haven’t been outside the country and don’t know what poverty means elsewheres.” Bill de Blasio has his moments too, but he still has a few years to catch up in testiness, it should be noted.

Craziest Election Cycle: 2013. From Anthony Weiner’s second sexting scandal, to notorious ex-Gov. Eliot Spitzer leaping into a citywide race, to the collapsing, history-making candidacy of Christine Quinn, to that Bill de Blasio guy, to billionaire John Catsimatidis’ dream of a New York City monorail system, last year was special. And testy Bloomberg was still around to weigh in back then too! Good luck topping that one, Gotham.

Update (5:35 p.m.): Former Councilman and congressional candidate Dan Halloran–who happens to be fighting his own indictment–can sing us out:
[youtube http://www.youtube.com/watch?v=n1BVkSLVcs4&start=760&w=420&h=315] 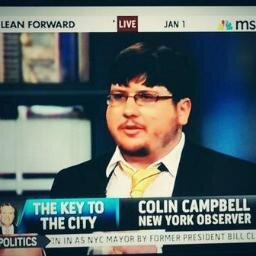