Council Speaker Melissa Mark-Viverito, Manhattan Borough President Gale Brewer and representatives from the city chapters of the National Organization for Women and NARAL Pro-Choice gathered in Manhattan today to denounce Mr. Cahill, a former chief of staff to ex-Gov. George Pataki, who formally kicked off his bid against Attorney General Eric Schneiderman yesterday.

“[Mr. Cahill] seems to think that in this day and age, it’s okay to be anti-choice in New York State. We’re saying clearly that’s not the case,” declared Ms. Mark-Viverito. “To me, if you’re anti-choice, you’re anti-woman. You’re not allowing a woman to fully exercise the rights that she has and that’s really problematic.”

“The comments he has made have clearly indicated that he is strictly, strictly anti-choice,” Ms. Mark-Viverito added, knocking Mr. Cahill for working in a Pataki administration that she charged was restrictive on reproductive rights.

Democrats have been hitting back at Mr. Cahill since before he even entered the race. On Friday, former Council Speaker Christine Quinn slammed Mr. Cahill for opposing the Women’s Equality Act, which would codify the 1973 Roe v. Wade decision into New York law. In a radio interview on Fred Dicker’s radio show in April, Mr. Cahill stated that he did not believe the bill’s pro-choice protections were “necessary.”

“Not only do we have to pass all 10 points of the Women’s Equality Act, we have to make sure we have an attorney general that looks for cases that demonstrate a pro-choice state because that is what we elect an attorney general to do,” Ms. Brewer said. “I am so afraid, given Mr. Cahill’s background … he has no record of doing anything that supports any family or women’s or workers’ or housing issues.”

“We need to make sure Mr. Cahill is not our attorney general,” she added.

But David Catalfamo, a spokesman for Mr. Cahill, rejected the charges, calling the demonstration “sad” and “desperate.”

“It’s sad and desperate that Eric Scheniderman would send out surrogates to tell lies about John Cahill,” Mr. Catalfamo told the Observer. “As attorney general, John Cahill is committed to upholding the laws and constitution of this state, whether that be the women’s right to choose, same-sex marriage, or educational choice.” 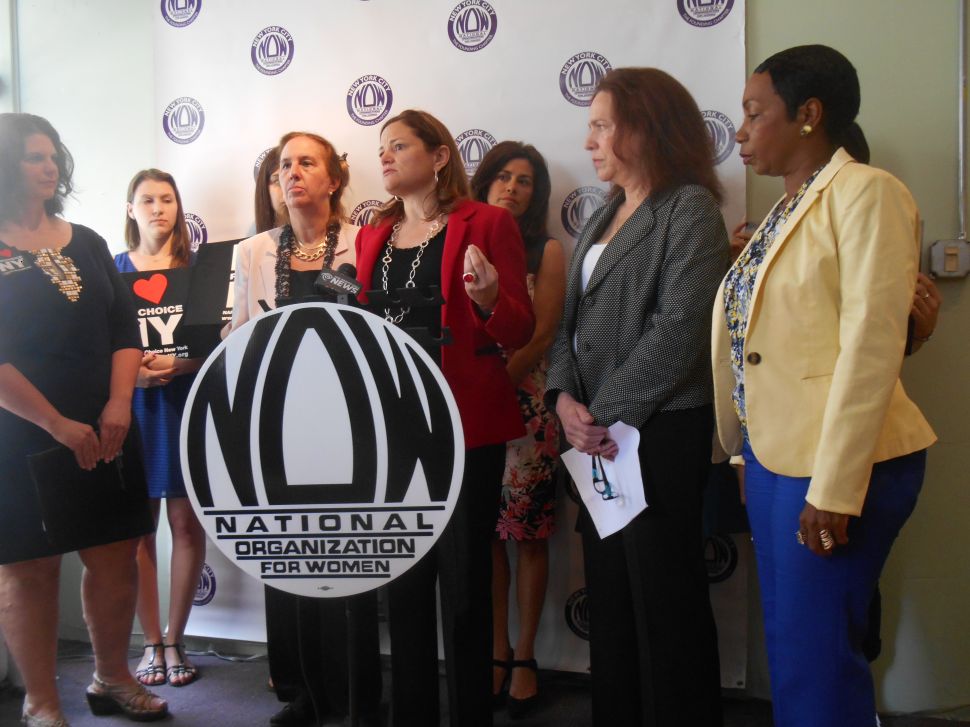