TRENTON – More than one hundred protestors gathered at the Statehouse on Thursday to declare their opposition to Gov. Chris Christie’s plan to take $2.43 billion meant for public workers’ pensions to close the state’s $800 million budget gap over two years.

Christie declared on Tuesday that to deal with the crisis “directly,” he wants to reduce a $1.6 billion pension payment the state was scheduled to make before June 30 to $696 million by executive order and slash a $2.25 billion payment that was set for next year to $681 million, a move that the governor will seek approval for from the Democratic-controlled Legislature. Christie did not immediately offer any other alternatives to shore up the state’s fiscal shortfall.

State Senate President Steve Sweeney (D-3) set the tone at Thursday’s rally regarding Christie’s chances to get legislative approval for his plan, as well as one notable alternative.

“There’s not a spending problem in this state, there’s a revenue problem,” Sweeney said. “I don’t believe in class warfare, but I don’t believe in the middle class and the working poor being constantly the ones that have to bear the burden here. There’s one group of people paying much less and doing much better, and that’s the wealthy. What we’re asking them to do is chip in and be part of this.

“The governor made a statement the other day that we’ve got a big crisis, and every single option is on the table. So [State Assembly Speaker Vincent Prieto] and I said ‘How about the millionaire’s tax?” Sweeney added. “[Christie said] that’s not on the table. The hell it’s not. It is time for everybody to share in the burden in the restructuring and rebuilding of the state.”

“The problem we have is the mismanagement over the last five years. We have not done our budgeting correctly,” Prieto (D-32) said. “We actually have been protecting the mega-rich, while the working class and the poor have been crushed under this administration. We have to stand up and make sure that we give income equality for everybody.”

Christie spokesman Kevin Roberts provided a transcript of the governor’s comments  on Tuesday with regards to Democratic legislative leadership suggesting the implementation of a millionaire’s tax for the state’s top financial earners.

“Ten families pay more, much more, than the bottom two million filers. If what we want to do is give those families another excuse, not to leave New Jersey, just not to spend 182 days here, because remember, that’s all they have to do,” Christie said. “They go to their house in Florida, they go to their house in South Carolina, they go to the Bahamas, they go to Paris, as long as they’re not here for 182 days they’re not paying our taxes. If you think that people haven’t already walked and voted with their feet, they have, and I’m not giving them another excuse to do it.”

The New Jersey chapter of the Communications Workers of America (CWA), the state’s largest public sector union, promised on Wednesday to sue in response to the administration’s plan. On the Statehouse steps on Thursday, Hetty Rosenstein, the New Jersey director of the CWA, showed so sign of letting up the pressure on Christie.

“The fact is that Christie-nomics are a failure in New Jersey,” Rosenstein said to cheers from the crowd. “We must immediately change this course. We must do what other successful states are doing – we must pass a millionaires tax.” 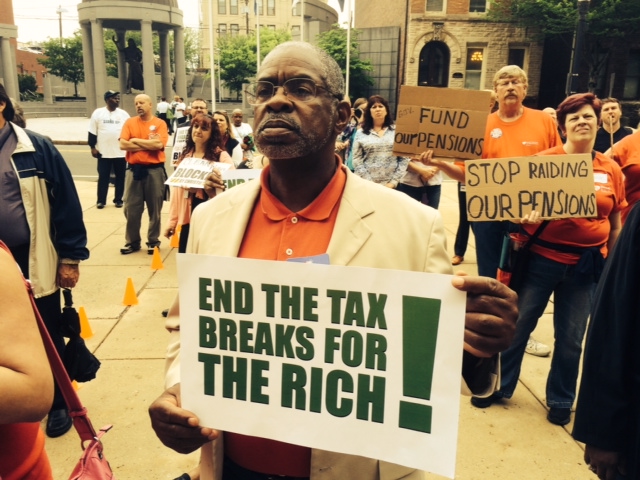