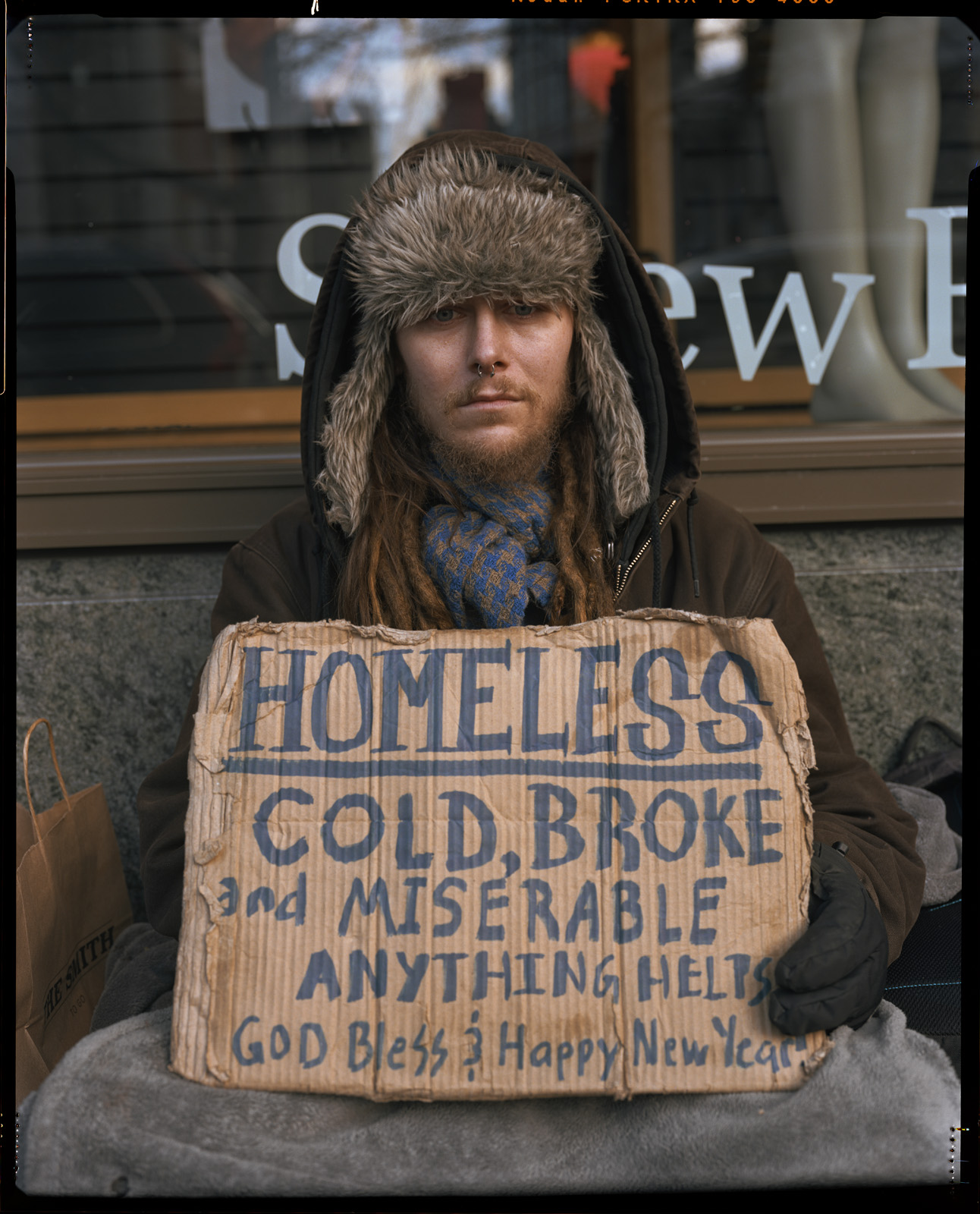 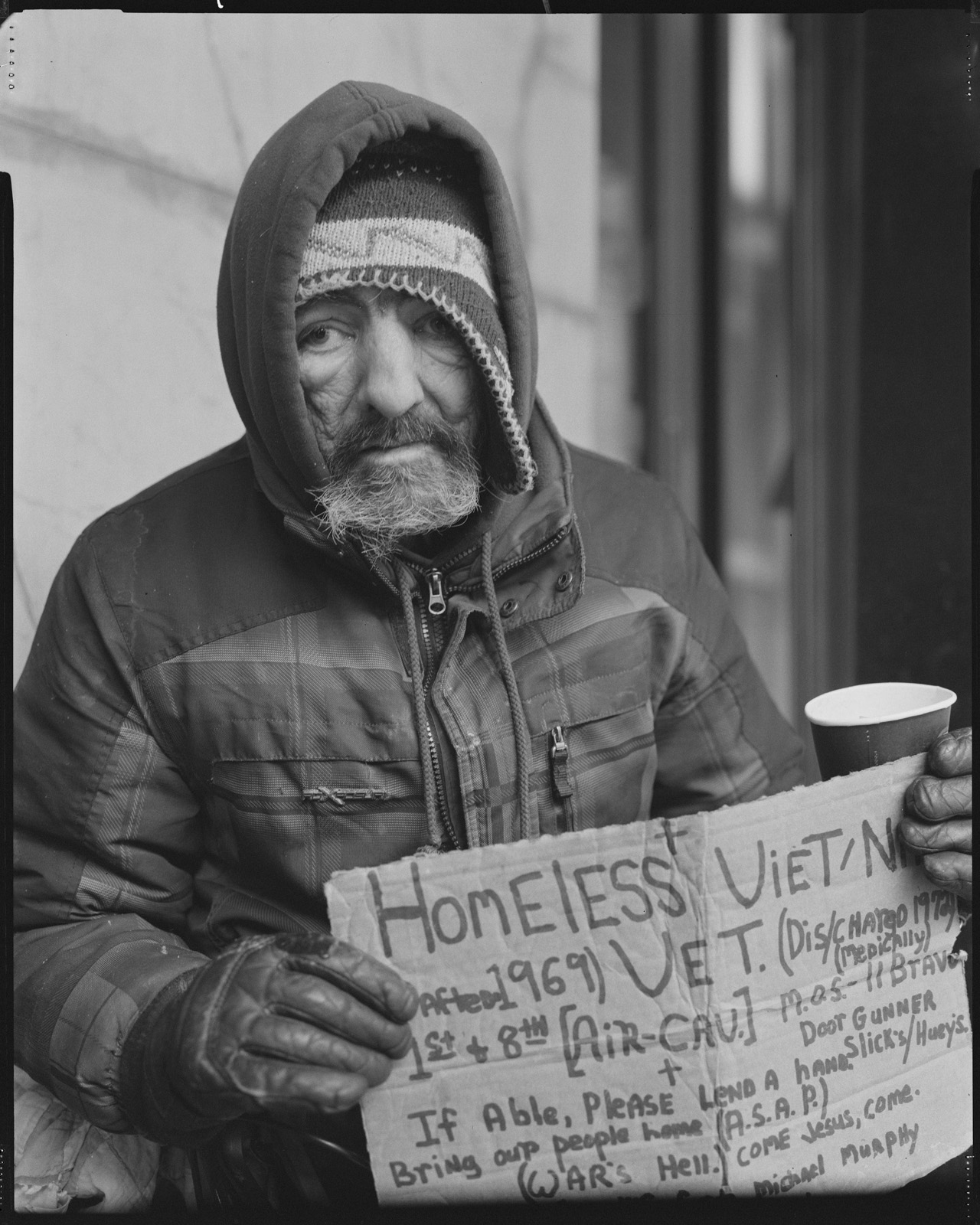 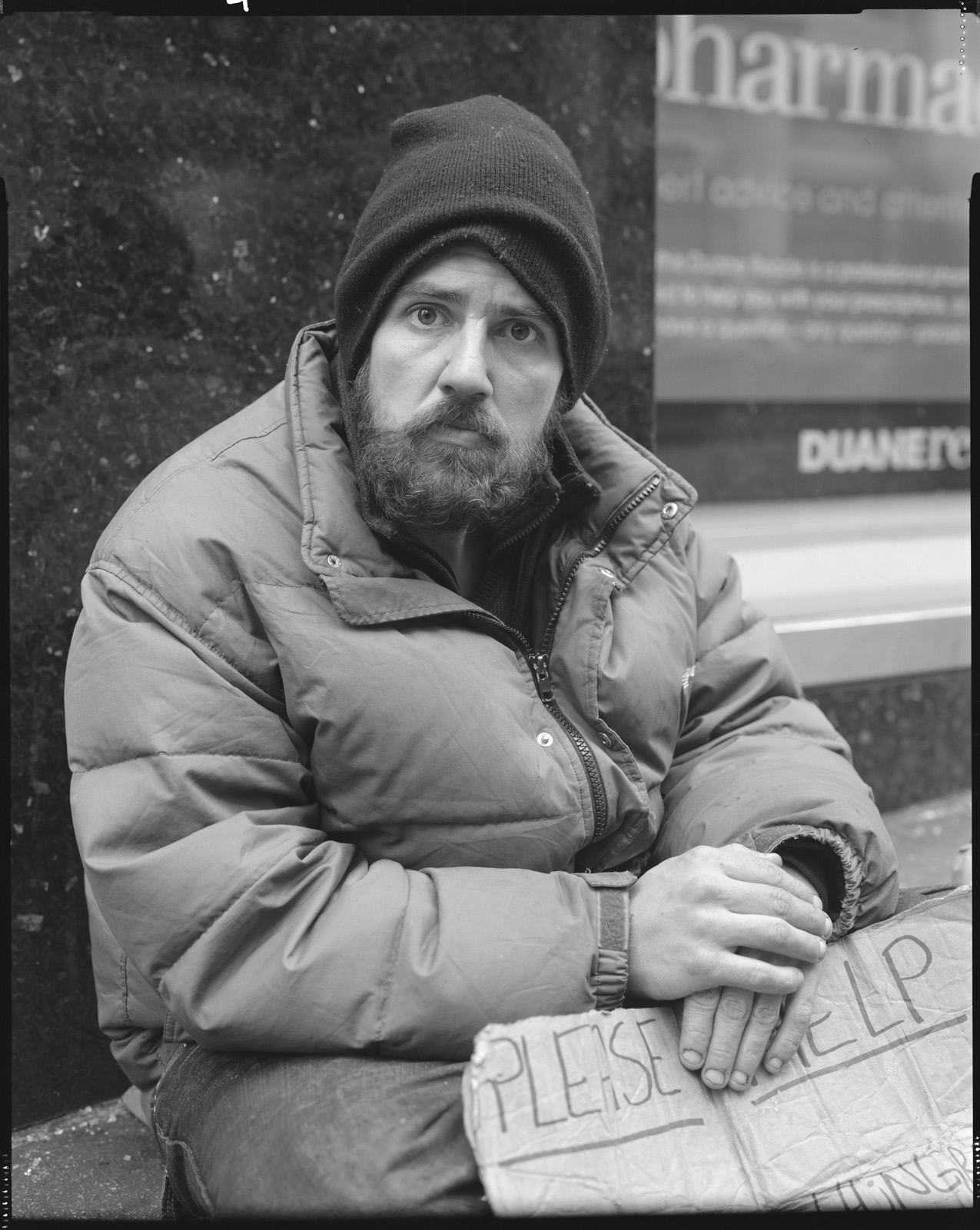 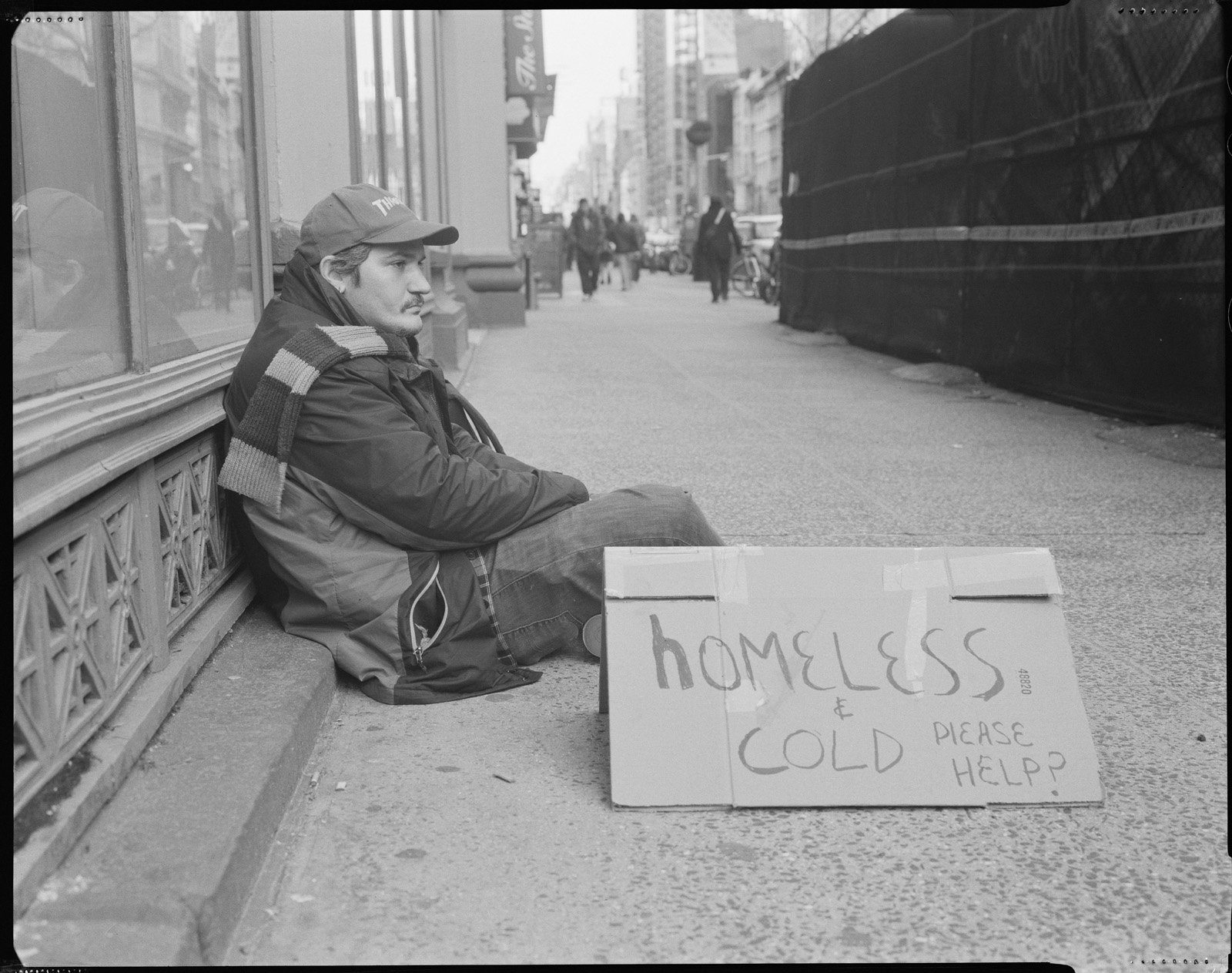 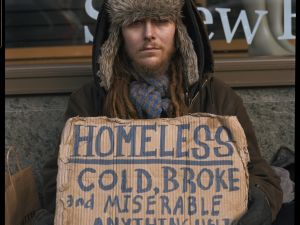 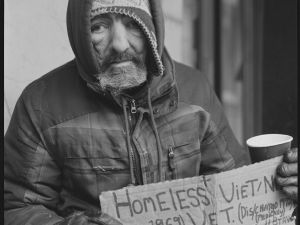 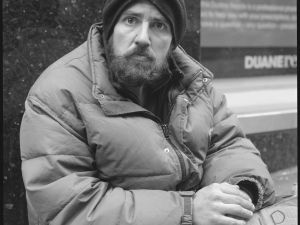 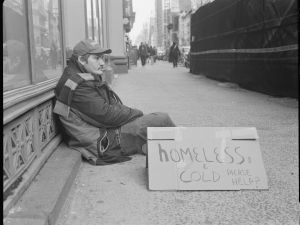 As of May 19, those used to seeing ads lining the corridors of the West Fourth Street subway station are in for a surprise. For a month, those corridors will instead be home to large-scale portraits of homeless people by the artist Andres Serrano.

The project, “Residents of New York,” sponsored by the nonprofit More Art, came out of another one Mr. Serrano, who is best known for his controversial 1987 photograph, Piss Christ, embarked on in the fall. Last October, he said, he began to notice more homeless than ever on the street. He had noticed this before, 20 years ago, and had made studio portraits of the homeless, but he wanted to take a different approach to the subject this time and began paying attention to the handmade signs people held, asking for money or food. He spent October walking the streets of Manhattan for six hours a day, offering to pay $20 for signs that interested him. He ended up collecting more than 200 of them and made them into a video, funded by the nonprofit Creative Time.

He had made a commitment to do a public installation with More Art—his first-ever public art project in the city—and in December, he decided he would continue working with the homeless, this time doing portraits but switching from his usual studio format to photos taken right on the street. He wanted a more elaborate process than a point-and-shoot, though, and settled on a camera that uses 4-by-5-inch negatives. By January, he and an assistant were again trudging the streets, this time in frigid weather and laden with heavy equipment that required lengthy setup.

Some of his 85 subjects were the same people from whom he had collected signs. “I would tell them I’d been buying the signs, because every sign tells a story and I wanted to tell their story and that it was the same when I photographed them.” He paid each of his subjects for their time.

Sometimes, those stories unfolded even as he was doing his work. He photographed a young man, who was visibly ill, in front of the Whole Foods at Union Square. “Three weeks later, someone said to me, ‘That guy Red you photographed? He died.’ So there’s a person where this is the last portrait we have of him. It’s a beautiful portrait. Someone I know said to me, ‘I see these people on the street, and I always hated them. But when I see that portrait of him, I feel something for him that I didn’t feel before.’ That’s a great compliment—that you see this person as a human being.”

Micaela Martegani, the executive director of More Art, said she and Mr. Serrano wanted to display the photographs in “something between a traditional exhibition and a social awareness campaign. Subway stations seemed like a good choice.” (Photos will also be on view on LaGuardia Place (in collaboration with the Department of Transportation), Judson Memorial Church and some phone booths.) They settled on the West Fourth Street station, in the neighborhood where Mr. Serrano has long lived. More Art partnered with CBS Outdoor, which manages advertisements in the subway system. The photographs will be placed at eye level along the station’s long corridors.

Mr. Serrano prefers not to see himself as a crusader for social justice but rather as an artist tout court. “I don’t do it out of a need to address a social problem. I do it out of the need to be the artist I am. My job is to reflect the times I’m in. This is what I see. For me, it’s a welcome change to see big beautiful photos of homeless people in the subway station—portraits of individuals who work on the street. I prefer that to another Calvin Klein ad.”

Still, he will admit to some political angle. “Back in October, November—when the old mayor was going out and the new one was coming in—I saw more people than ever living on the street. It’s seemed like a testament to what [Michael] Bloomberg left us with.”

In December, an artist colleague visited his photo lab. “We were talking about the homeless. She was saying, ‘There are hardly any anymore.’ I said, ‘That’s because you’re not looking.’ People think there aren’t many homeless, because they don’t see them. I saw a lot of homeless and a lot of people ignoring them.”

The very fact of Mr. Serrano and his assistant setting up their improvised photo studio made some otherwise oblivious passersby take note and leave money. Ms. Martegani hopes the public nature of the photo installation might also affect change. “We hope the strong humanity of the works will make people stop. A lot of the people in the photographs are in that neighborhood, so there is a direct connection. We hope if people pay attention to the photos they will go back outside and see the real people.”