Sharmilla Ramcharitar got it on her ankle.

Though it was her first tattoo, the real estate agent seemed confident in the decision. “I plan to be with the company for life,” Ramcharitar said in a YouTube of the event. The green and black tattoo showed a pair of inverted capital R’s printed on her ankle.

Next to Ms. Ramcharitar, beaming, were Michele and Martin Charles, co-owners of the Rapid Realty franchise in Forest Hills, Queens where Ramcharitar works.

“I’m getting some ink, too,” Ms. Charles said, clasping her hands, “because Rapid Realty is that important.” As the tattoo machine hummed, Ramcharitar explained that the tattoo was about making money.

“I’ve gotten so many testimonies about people making so much money with this company, I’m not gonna waste time,” she said. Like all brokers, Rapid Realty agents work on commission, and getting the ink would, in fact, ensure Ramcharitar a higher percentage of the broker’s fee tenants pay each time she rented an apartment. Since a Rapid Realty agent in Bushwick had the idea to tattoo himself with the company logo four years ago, Rapid Realty founder and CEO Anthony Lolli has offered any agent who follows suit a 15 percent raise and the title of “brand ambassador.” So far, 75 employees have gone under the needle.

When Ms. Ramcharitar’s tattoo was finished, it was Ms. Charles’s turn, and she looked calmly into the camera. “We continue to feel so grateful, truly, to Anthony Lolli,” she said. “So thank you, Anthony.”

Anthony Lolli is an affable, charming 36-year-old from Brooklyn who entered the real estate business at age 19, started his own company at 21 and bucked the recession over the last five years by franchising his original business. Since 2009, Rapid Realty, Mr. Lolli’s Brooklyn-based brokerage, has grown from a single location in Park Slope into New York City’s largest rental-based real estate brokerage, with some 40 locations mostly in Brooklyn and Queens. Mr. Lolli himself, meanwhile, has become a rising star in the industry, featured often in trade publications and magazines such as Businessweek. Last year, the self-made entrepreneur became the first real estate executive to win a Golden Bridge Award for technological innovation.

But success has brought complaints from former employees who say the company’s unusual methods of compensation—such as offering raises to those who get tattoos—and reliance on novice labor are the main reasons for its growth.

Mr. Lolli has been praised as a big thinker who is shaking up the residential real estate industry with tactics tailored to the times, making it easier to join and, from the customer’s perspective, simpler to navigate. (Lolli says he provides real estate for the 99%, comparing his company to Subway and various fast food franchises.) Whether true or not, much of Rapid Realty’s success inarguably comes from exuberant marketing, especially by Mr. Lolli himself, who has no  tattoos but is nothing if not the original brand ambassador, posting motivational catchphrases he calls “Lollisms” (“Negative people need drama like oxygen…Stay positive and take their breath away”) on Facebook and energetically promoting his own rags-to-riches tale.

Mr. Lolli grew up in Brooklyn, the son of an Ecuadorian immigrant who arrived in the country virtually penniless. Later, his parents would become teachers and join the real estate industry, but Mr. Lolli, unsatisfied, would vow to buy his mother a white mansion and limousine.

In a 2012 photo spread for the Real Deal, he proved he’d honored that pledge, showing off his car, a white Rolls Royce Ghost, and the white $4 million mansion he owns in Bay Ridge.

The Rolls, he says, is as much a business asset as a means of transportation. “You could talk to somebody till your face turns purple,” he said, “but come in with a nice car, you have their attention.”

Last summer, a New York City schoolteacher noticed the car and its “MR LOLLI” vanity plate (“I’m Hiring” says the frame) while out with friends on a Saturday night. “Who’s that?” she wanted to know. Mr. Lolli introduced himself and handed her a business card. When she lost her job a few weeks later, she became an agent and joined a Rapid office in Park Slope. Those familiar with Mr. Lolli call hisrecruiting style “Chinese torture.” He wears people down, convincing them to leave other jobs for Rapid, which offers new agents free real estate licensing classes worth about $400. (Until 2011, a school run by his mother, Gladys Lolli, offered the classes.) He prefers people in the service industry or sales: bartenders, waitresses, cashiers, as well as the unemployed or “unemployable,” he says.

Carlos Angelucci started working with Mr. Lolli in 2005. He had been a manager at RadioShack when his sister answered Mr. Lolli’s Craigslist ad seeking a real estate instructor. The sister took a job in Mr. Lolli’s Park Slope office and kept pestering her brother to join her. Carlos wasn’t particularly interested in real estate, but “there was something about the fact that [Lolli] was growing his operation on a personal level—owning all the buildings and the nice cars—that kind of affected me,” he says. Today, Mr. Angelucci is Mr. Lolli’s COO and right-hand man—the guy on the laptop or iPhone while Mr. Lolli talks about company history or the rebounding rental market. His sister now co-owns the Sunset Park franchise, one of Rapid’s most successful.

These are Mr. Lolli’s ideal recruits: people with no real estate mileage and “no bad habits.” Indeed, it hardly seems a coincidence that in describing his employees, Mr. Lolli has said he feels like a parent, “and all of a sudden you adopt 1,000 children.”

To compensate for incoming agents’ lack of experience, Rapid uses an assembly line to divide up the labor of a real estate transaction, with some agents focused on showing apartments, others on collecting listings, and a third group on closing deals. Mr. Lolli says he prefers to compartmentalize because too often new agents have “too much responsibility” as they try to learn the real estate business, and breaking it “into processes” makes the system more efficient.

The assembly line also allows Mr. Lolli to pay his employees a different rate from the standard 50 percent commission real estate agents in New York receive—some more, others significantly less. Rapid agents are incentivized by volume, usually making between 25 and 40 percent per deal, with an agent’s status—classified as green, silver, gold or platinum—determined by the average number of transactions they close each month. Brokers at “green” make the minimum, while “platinum” agents keep 40 percent.

In this light, the tattoos make sense. Anyone with a tattoo achieves platinum status for life.

When Helvin Rymer first saw a Rapid Realty office, he “loved the way the office looked—exposed brick and a whole bunch of computers lined up.” A friend told him the company would pay for his licensing course if he worked for them for three months. Once he passed the test, Rymer joined an office in Manhattan, worked at Rapid for three months and made almost no money. He said the same was true of many Rapid agents.

Agents often cite the free licensing class as the reason they join Rapid Realty. As with many real estate agencies, however, dropout levels appear to be high. According to one former Rapid franchisee, who requested anonymity, “it’s, if they have a pulse, bring ’em in, give ’em a shot.” Mr. Lolli says he doesn’t know how many agents wash out, but admits, “We never really have to fire anybody for nonperformance. They leave on their own.”

“The idea of giving everybody an opportunity is terrific,” said the former franchise owner. But “people coming into the company sometimes lack even basic computer or reading skills. If I’m training you in how to check email, I’m never going to make you a salesperson.”

Richard Bonilla is 29, grew up in the Bronx and has worked in sales since high school. He joined Rapid in 2011, drawn by the company’s online videos of agents holding up paychecks and boasting how much money they earned. He managed to become office manager of the Upper West Side franchise but never earned more than a 25 percent commission. He says, “the idea behind [Rapid’s] system was that you’re getting less commission and you get more volume in turn.” But, he says, “the volume wasn’t really there.”

Another former agent, also requesting anonymity, claimed Rapid’s business model is predicated on packing its franchises with agents struggling to reach the higher commission levels, but who bring the company short-term revenue before quitting, to be replaced by an ever-plentiful supply of new, inexperienced agents.

Which may explain some of the reviews Rapid receives on websites like Yelp. (“Kiss your security deposit good-bye!!!” “I’ll never waste my time with them suckers again.”) To be sure, Rapid is hardly alone in a room filled with brokers who have been filleted on Yelp. Mr. Angelucci contends that customer dissatisfaction is simply the nature of New York’s rental market, while Mr. Lolli maintains that competitors plant the complaints.

One former customer was Eathan Janney, who in 2011 gave a Rapid broker from the Fort Greene office a $500 deposit for an apartment in Bedford-Stuyvesant. Soon afterward, the agent stopped returning calls, so Mr. Janney went to the landlord. “He said the place wasn’t going to be ready for a couple months,” said Mr. Janney.

Landlords also appear to have grievances (not a shocking exception to landlord-broker relations overall.) One manager of apartments in brownstone Brooklyn told the Observer of “banning” Rapid agents for incidents such as trying to access apartments without permission.

2013 was a big year for Rapid Realty: In addition to continuing to expand within New York, the company branched out to two states, California and Massachusetts, and soon expects to open an office in Connecticut. If all goes according to plan, Rapid will exist in “every major metropolitan market and every major college town,” Angelucci says.

If so, it may pioneer a new model for franchising – one in which some franchisees receive a lower share of profits than in the past. According to experts, the real estate industry standard for franchise royalties is between four and six percent. Rapid Realty, on the other hand, takes a cut of 15 percent.

Last month, Rapid held an awards ceremony at the Marquee nightclub in Chelsea. “Pretty Lou” Ortega from Power 105.1 was there hyping the crowd (“This is not your grandfather’s real estate company!”) while an aerialist in a flesh-toned bodysuit hung from a cube and Anthony Lolli’s diamond bracelet sparkled from the stage. Early in the ceremony, as the DJ played “Hail to the Chief,” Mr. Angelucci introduced recently elected Brooklyn Borough President Eric Adams. Last year Mr. Lolli made a $2,000 donation to Adams’ 2013 campaign, and currently serves as an advisor to the politician.

“The quality and style that [Angelucci and Lolli] have put in to this form of business has really been a game-changer,” Adams would declare. The line at the bar was five-deep, and Angelucci attempted to shush the energetic crowd. Adams, however, seemed to identify with the spirit of hustle in the air:

“Borrowing a quote from one of the most philosophical prophets of our day,” he opened, “the Reverend Drake, ‘Started from the bottom, now we here’ . . . This is a great brand. Their heart is in the right place.” 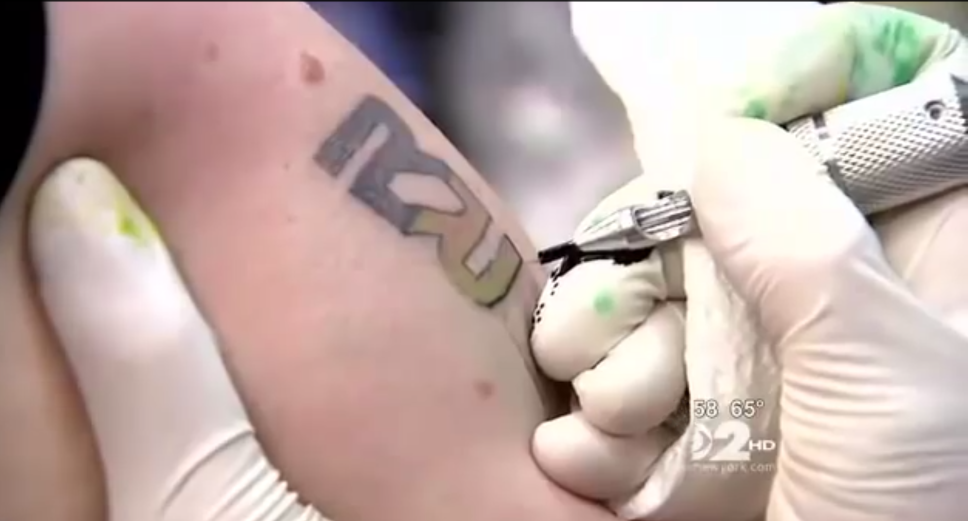