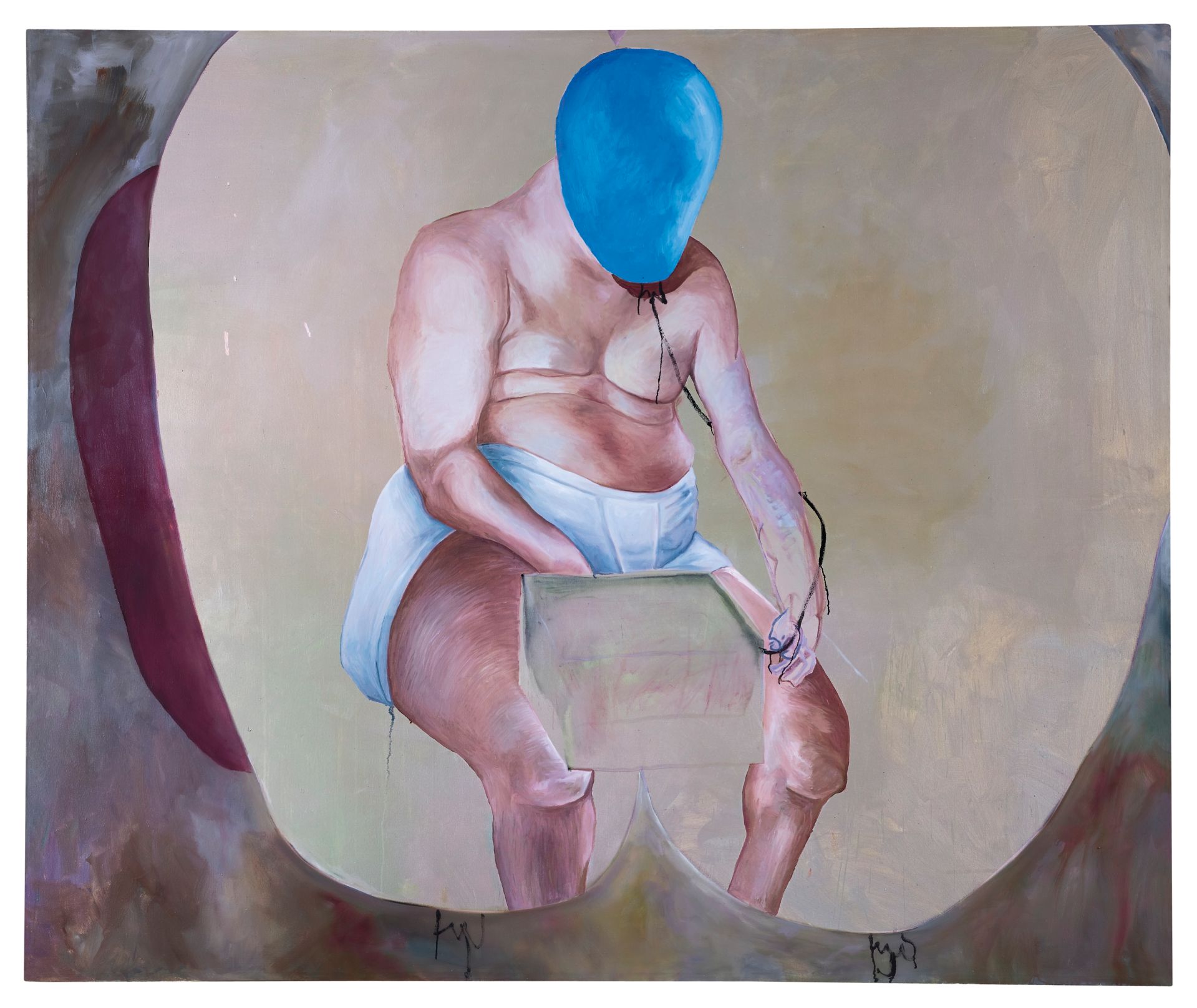 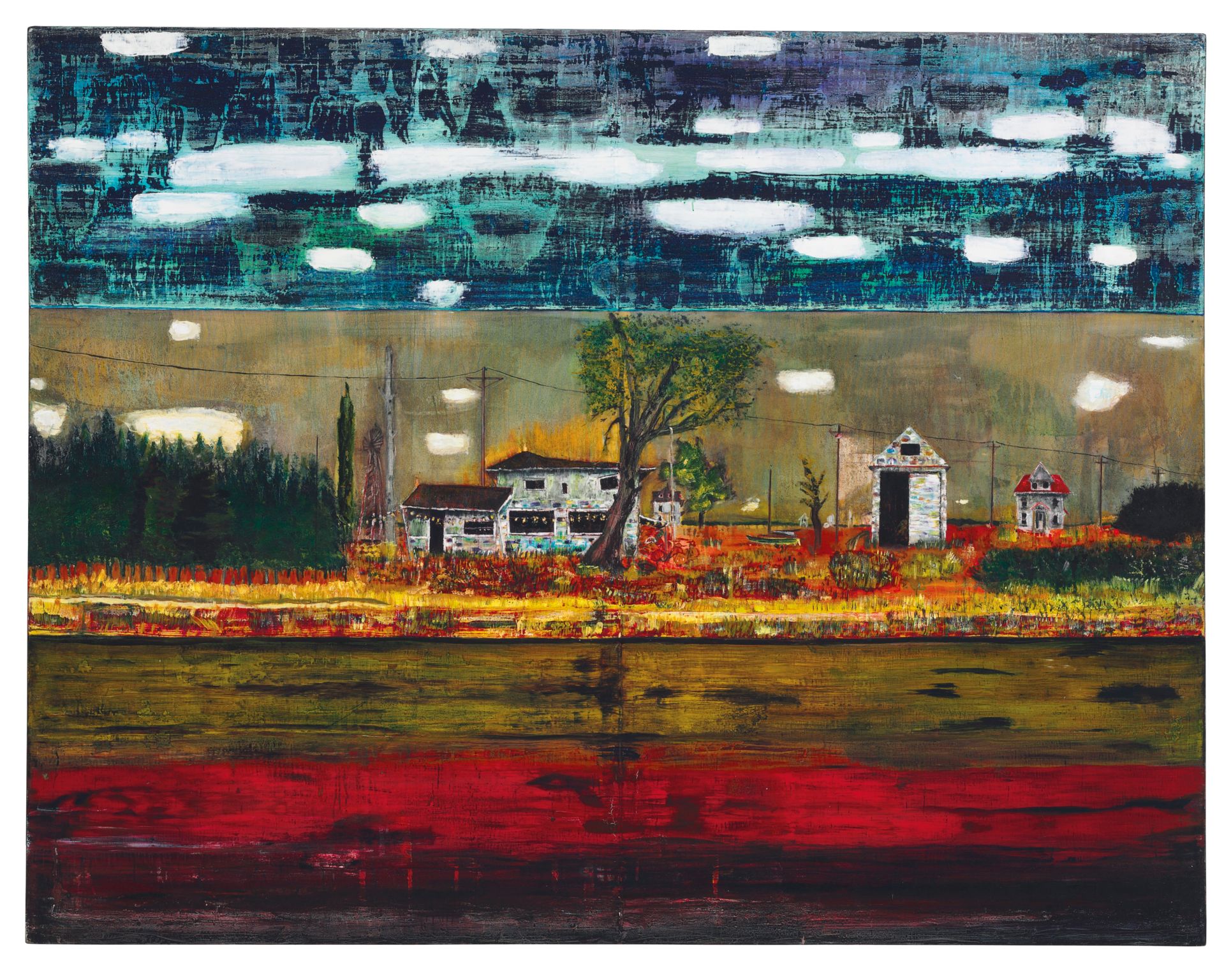 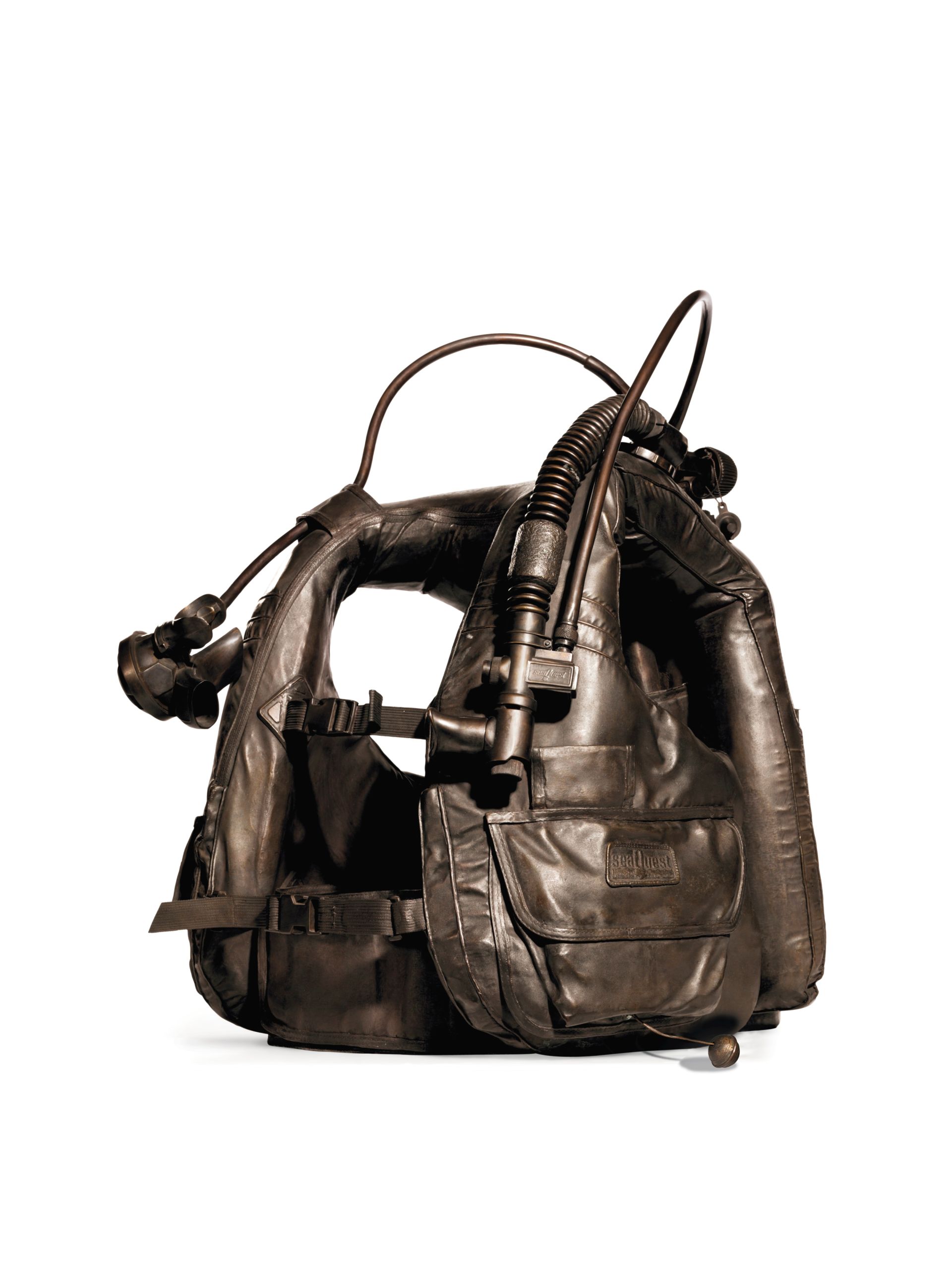 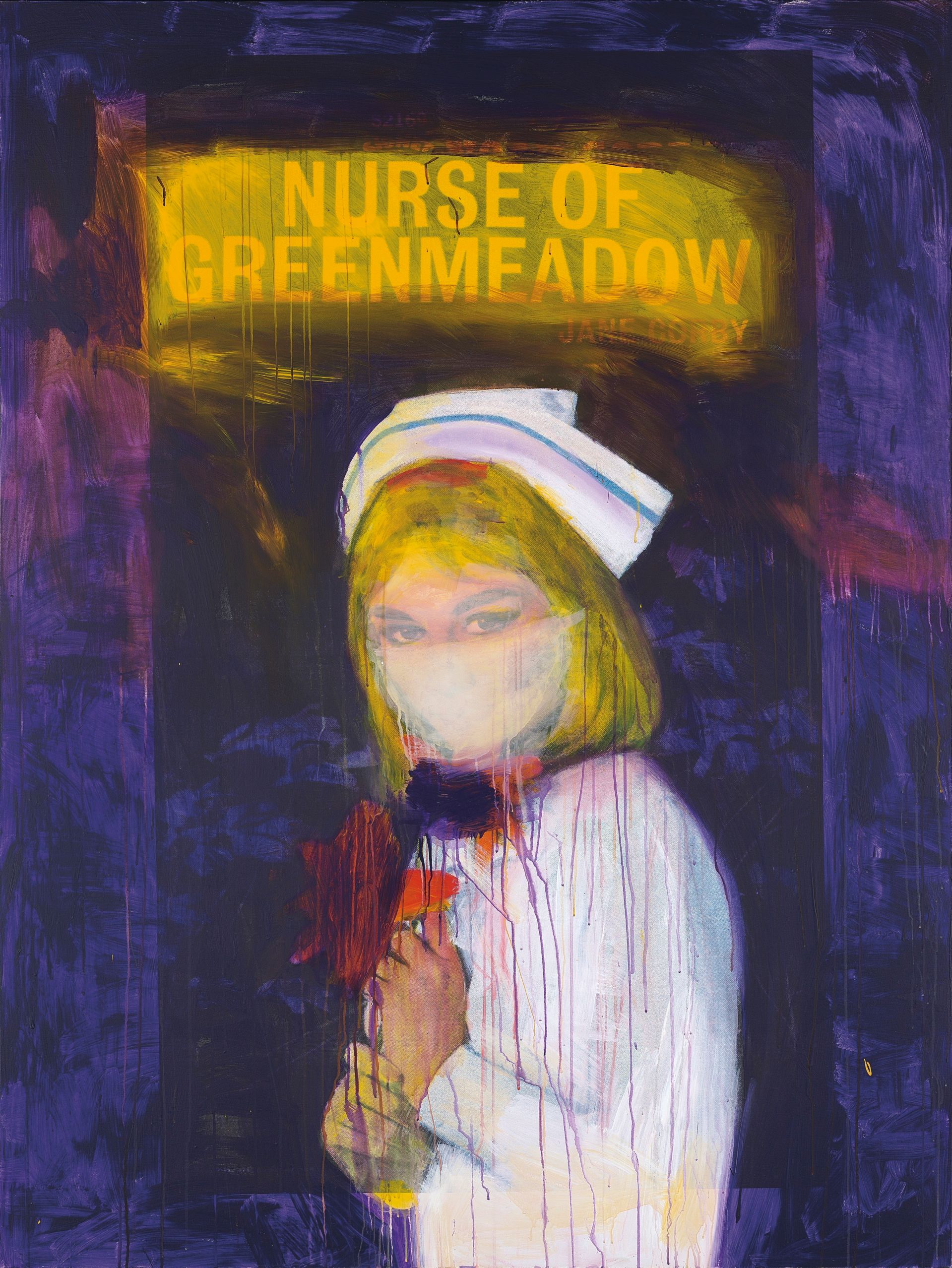 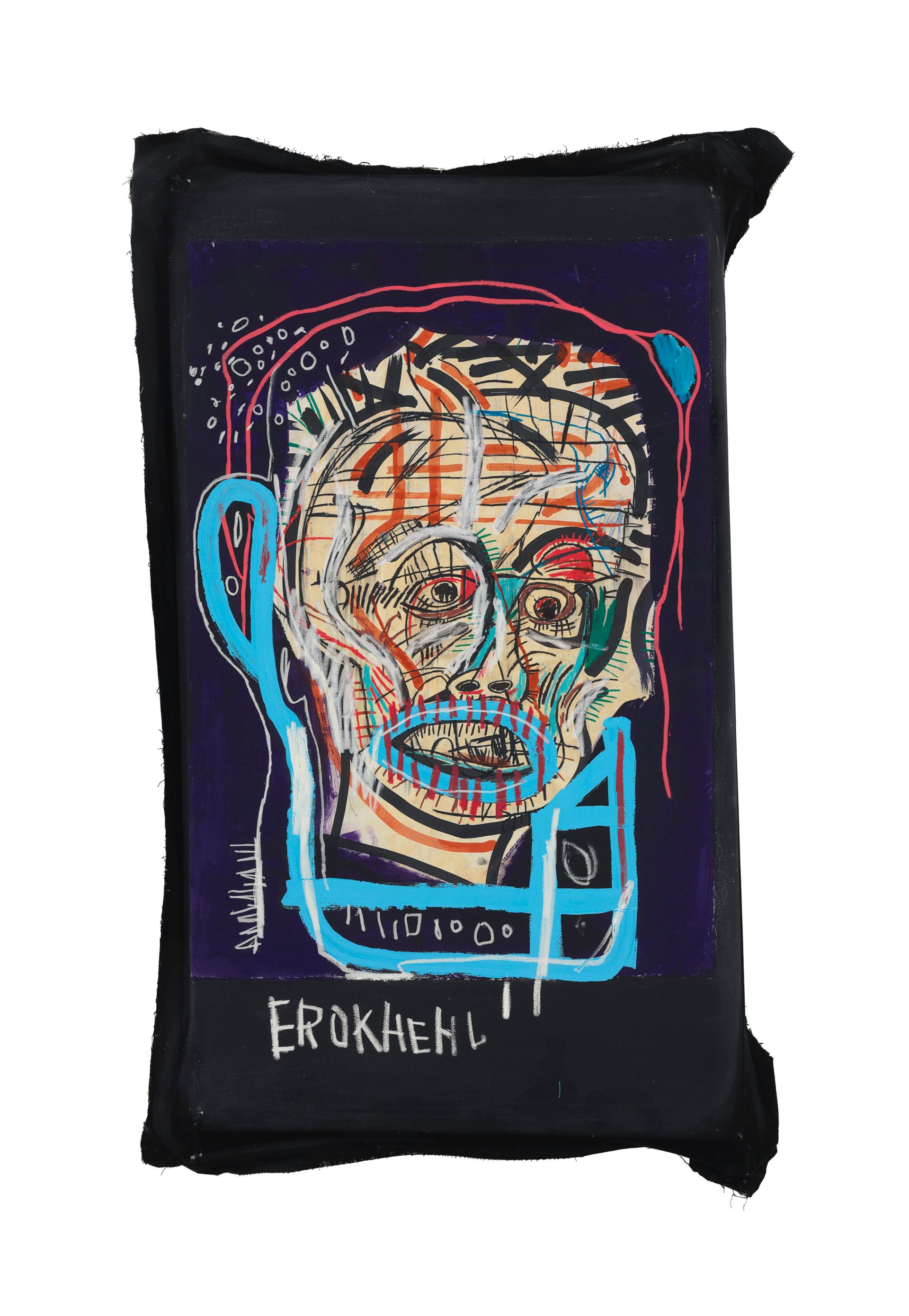 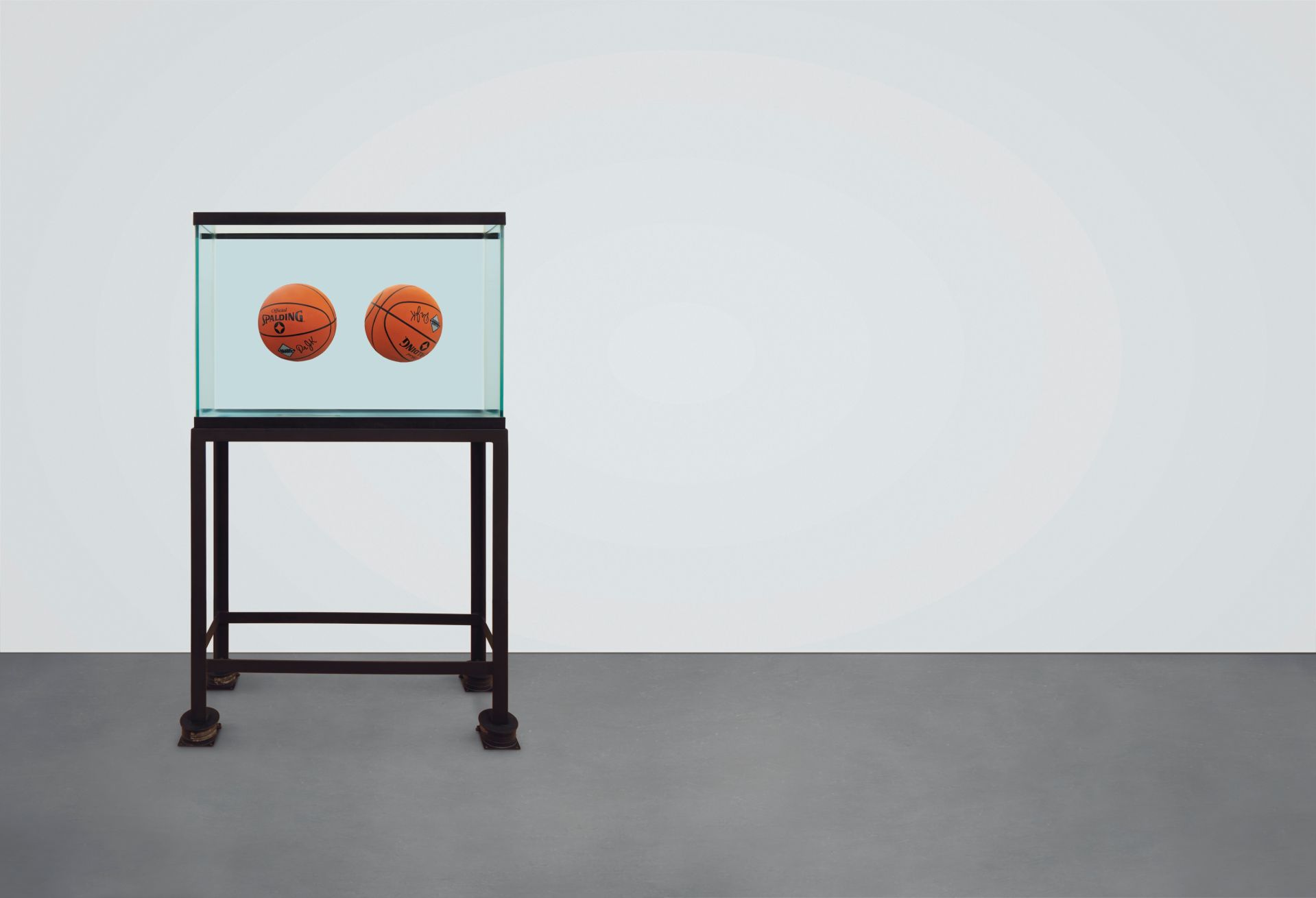 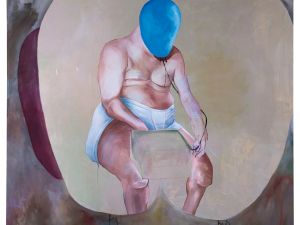 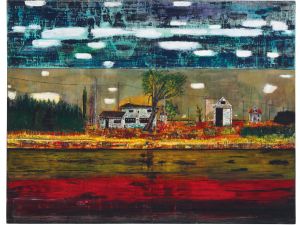 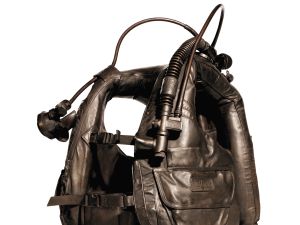 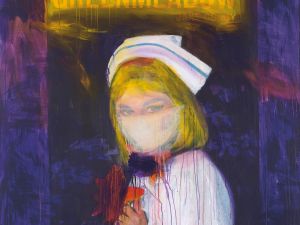 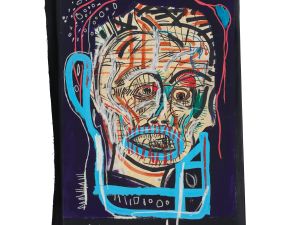 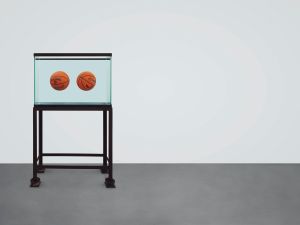 Earlier this evening Christie’s kicked off the spring contemporary auction week with an impressive performance at the one-off sale it had dubbed “If I Live I’ll See You Tuesday” (after a Richard Prince joke painting) and filled with what it termed “the gritty, underbelly-esque side of contemporary art.” It brought in $134.6 million for the house, including buyer’s premiums, at the top end of a high estimate of $124.1 million (calculated without premiums), and saw 14 new artist records, for Joe Bradley, Alex Israel, On Kawara, Dan Colen, Richard Prince, Martin Kippenberger, Wade Guyton, Louis Eisner, Thomas Schütte, Michael Riedel, Peter Doig, Glenn Ligon, R.H. Quaytman and Adam McEwen.

Auctioneer Jussi Pylkkanen oversaw a businesslike room that witnessed a healthy number of bids on the floor, even though many of the lots had, in effect, been pre-sold, with guarantees. Of the 35 lots, 15 carried a guarantee, which means the house had someone bound to bid on it, and the record-setting lots for Messrs. Bradley, Colen, Guyton, Prince, Doig and McEwen were all achieved in under a minute. Just one lot, a Cindy Sherman, failed to sell, and only two sold for below their low estimates. The private bidding rooms upstairs even seemed overcrowded; Christie’s had again erected an in-room deer blind area with a one-way mirror, as they had for organizer Loic Gouzer’s last signature sale, a charity auction for Leonardo DiCaprio.

The contest for the top lot, an untitled Kippenberger self-portrait from 1988 that eventually sold for $18.6 million, seemed real enough and played out across the room with phone bids from the low teen millions between specialist Robert Manley, head of postwar and contemporary art, and Xin Li, the house’s deputy chairman of Asian business development. Mr. Manley’s client would frequently offer $100,000 or $250,000, to which Ms. Li’s would respond aggressively, going from $13.75 million to $15 million, then $15.25 million to $16 million. “Say 17, that might do it,” Mr. Pylkkanen advised early on, jokingly, but then they nearly did get there. The lot hammered at $16.5 million.

Most in attendance after the sale were talking about the impressive sums for two young artists having their first auction outings, Mr. Israel and Mr. Eisner. Mr. Israel saw bidding from the Nahmad family’s youngest member, Joe, and art adviser Alex Marshall, who was the underbidder, losing to a phone bidder who paid $1 million with premium for the work. (Mr. Eisner’s work, which like Mr. Israel’s was a painting reminiscent of a moody sky, went for $137,000 with premium.)

Garnering attention for these living artists was largely the idea, said Mr. Gouzer, after the show. He said that he wanted to break out works by artists like Mr. Prince because, when such they appear in a proper contemporary evening sale, they are often lost in the “shadow of a [Mark] Rothko or a [Clyfford] Still,” when “these artists are masters in their own right.” The sale also puts Christie’s in a market previously dominated by Phillips auction house, and though Mr. Gouzer demurred when asked if they’d do it again next season, one dealer outside speculated that they certainly would, and said Sotheby’s would be foolish not to try something like this as well.

But not everyone was happy. In front of Christie’s Rockefeller Center plant just before the sale, a tattooed protester stood before a huge Marc Quinn sculpture with a large poster reminiscent of the major Wade Guyton that was to be sold that evening, only his floating letter U had been modified so that it read “FUCK U.”

Mr. Guyton has been making his own sly response to the auction in recent days on his Instragram, snapping photographs numerous of prints that appear to be similar to the one sold tonight. Some have interpreted it as a subtle threat that he could flood the market if he wanted.

“Christie’s is taking contemporary art and making it go to prices that it shouldn’t be going to,” said the protester, who wore a baseball cap and a mask. “By the time they’re 30, these artists aren’t going to have anywhere to go.” He declined to give his name, or say if he was working with Mr. Guyton. “I can’t speak on that,” he said. “I can say: it’s not just me who’s behind this.”