When we last left our ladies, Kristen was leaking blood from her face into the lake, swimming from boat to boat (all I could think of at this moment was how likely it was that she would get one of those freshwater-dwelling, brain-eating amoebas) to show people her lip while Ramona tried to rationalize beaning her in the face with a glass.

“I’M GOING TO THE HAMPTONS,” Ramona declares when the episode begins, as though she is the wronged party.

“You’re going to have to get revenge,” Luann says to Kristen in a very matter-of-fact tone. In an interview Kristen calls Ramona “white trash,” echoing one of Aviva’s meltdowns last season, which strikes me as altogether unnecessary. Ramona definitely has a borderline personality disorder: why reach for offensive descriptors when you can just open to a random page of the DSM V and point to whatever?

“You don’t poke a sleeping lion, you’re gonna see claws,” Sonja says to Ramona back at the house, hyping her up like a boxing coach, clearly psyched to be a united front again. Carole and Kristen download about the incident in another bathroom while curling their hair, which strikes me as a very genuine moment. Talking about other people in the bathroom while fixing your hair and makeup is, like, one of the top ten best things about being a girl.

“Now I’m turning into my dad,” Ramona says in a rare moment of intense self awareness.

“YOU ARE NOT YOUR DAD,” Sonja sobs, unhelpfully. In the next moment Ramona “recovers” a memory about throwing a glass at her abusive father, and the cycle of denial and rationalization reasserts itself! Heather is sick of the dramatics and wants to eat dinner, so she goes to collect Ramonja. Sonja is wearing my favorite outfit from 2003 — a camouflage print tennis skirt and lace camisole — while Ramona tells Heather that she split her lip on a shotgun recoil once (???). Heather, proving to be an incredible hostess, lets it slide.

Outside, Kristen is reclining on a chaise, icing her lip and complaining that she has a headache. Carole’s tight smile says that this is starting to edge into “milking it” territory.

“Her hair looks like shit,” Kristen mutters to Carole as Ramona stalks across the lawn like a zombie queen. She delivers a very intense, cagey apology that Kristen completely rejects, and because Ramona is the type of person who will get mad at you for not immediately accepting an apology, before you know it they’re screaming at each other.

“WHO ARE YOU TO GET ME WET?” Ramona yells.

“YOU HAVE GOT TO CALM THE FUCK DOWN,” Kristen yells back.

“It’s kind of funny though, it’s hair,” Heather says to Sonja in an aside, then makes them sit down to dinner. She wants to get the show on the road in part because she has a surprise guest on the way. It turns out that Heather has hired an Elvis impersonator to break up Kristen’s marriage — I mean, to entertain her guests. Watching Kristen’s eyes shine with genuine love for this ridiculous man in his wig and spray tan is the funniest thing I have seen at least this week.

“I don’t remember the first time I fell in love with Elvis, actually,” she says in an interview.  “It was a collaboration of things.” Indeed.

The next morning everyone looks insane in the kitchen while preparing for breakfast — Luann and Carole are sporting full-length Dynasty-esque nightgowns, while Sonja is swanning around in a leopard print negligee, mules, and more jewelry than is appropriate for the early morning hour. Ramona sneaks away to call her friend Adam and ask him to spirit her away in his private plane to the Hamptons, before joining the others and agreeing to go on a hike.

In the woods Heather uses the phrase “getting down with nature,” but she’s been amazing thus far and so I forgive her. Ramona corners Carole and uses the patented Housewives debating gambit of asking a ton of rhetorical questions that are always designed to lead to the conclusion, “So fucking what?” and/or “I’m still right.”

They arrive in a clearing and Ramona goes ballistic. “This looks exactly like my backyard,” she says. She starts talking about how she used to play in the woods, and how growing up in the country was really isolating, and she thinks her father moved her family out there in order to better control them, while Carole looks around for an escape.

Finally they rejoin the group and Ramona tells Heather she has to leave because the memories from her past are overwhelming her, and by the way her friend is picking her up in his plane and she’ll smell you all later, kisses!

With Ramona gone, the ladies venture back into open again, this time on a pontoon boat piloted by a 20-year-old named Austin, who Sonja is clearly contemplating kidnapping and bringing her back to the Upper East Side as her house boy.

“You have your own apartment?” She flirts.

“My parents have a house here,” is the actual answer, which would be a boner killer for normal 40+ women, but not our girl! She tries to get his digits, though we never see if he gives them to her. Keep an eye out for him in future episodes, camouflaged amongst the other interns, flashing SOS messages at the camera operator.

On the boat, Carole is a bit of an instigator as she tells Kristen that pre-Glassgate Ramona was saying she doesn’t think Kristen has bothered to find out much about her.

“She didn’t think there was much substance with you, that you were just another pretty face,” Carole says, pointing out that a tiny bit of “competitive jealousy” might also be in play. Kristen is not ready to back down, and places a very dramatic phone call to her husband prior to dinner, during which the words “Wait ‘till you see my lip” come out of her perfectly normal-looking face. Come on, dude.

At dinner, Sonja demonstrates her flair for appropriate dinner table conversation when she says that she tried to take Carole to a gay bar at some point and turn her out, but she wouldn’t sleep with her, making her a “bullshit bisexual.” Thankfully, talk soon turns back to Ramona. Luann’s friend snapped a photo of her out at a party in the Hamptons, looking decidedly trauma free. Sonja is clearly put out that Ramona ditched her, especially after she spent the weekend vociferously defending her.

“She wouldn’t lie to me,” Sonja insists.

“She lied to you,” Luann says. “I think we have to have an intervention.”

Cheers to that! See you next week. 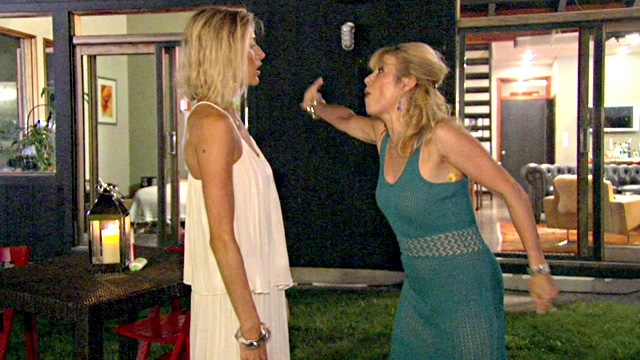