On last week’s Real Housewives of New York City, after agreeing to subject the absent Ramona to an intervention, the ladies apparently got completely blasted. Kristen wakes up first and makes herself a bagel amidst the wreckage — empty champagne bottles on the lawn, glasses strewn everywhere. Heather’s house looks fun!

Sonja accepts a cup of coffee from Heather, sipping from it with grateful duck lips. She digs around in her nightie for her diamonds before promising to join the ladies “in a little while.”

“It could have been the rosé mixed with tequila,” Carole says, which does sound like a lethal combination. Just when everyone thinks it couldn’t get worse, a yoga instructor pulls into the driveway. I say this as a person who loves yoga: how far into the woods must one go before one is assured of not being surprised by a yoga lesson on a hung over morning?

After stumbling into the sunlit yard like a baby deer standing up for the first time, Sonja perches on her yoga mat on her forearms and one knee with her other leg in the air, continuing to drink coffee. Everyone is farting. Pure elegance!

With that, we return to the city, where Carole and Luann bond over gift-giving etiquette. Carole has a column in Town & Country about manners that she is unqualified to write, based on an extended scene in which she quizzes Luann about what to get a guy for his birthday if you’ve only been dating a couple of weeks and may or may not have already had sex. Heather and Kristen meet in Central Park to talk strategy for the Ramona intervention. They confirm with Kristen’s son Cash, who just wants to eat his Mister Softee cone in peace, that he knows that throwing things at people is wrong (“I’d like to throw myself into this fountain though” – Cash’s inner monologue) and vow that Ramona will pay.

At last, the moment arrives. The ladies get to the restaurant early, opting for a booth in order to keep Ramona from fleeing. Carole has put on her finest Bob Fosse-esque white jacket + shorts + sequins ensemble for the occasion, while Heather is in an iridescent pink raincoat fit for a My Size Barbie. Bonkers outfits aside, the ladies have come prepared. When Ramona arrives Luann slides into the booth next to her.

“I’m like a linebacker for the 49ers. There was no way she was getting up.” This is like Bravo’s version of The Sting!

“SPEAKING OF THE HAMPTONS, HOW WAS THE MOLLY SIMS PARTY?” The countess asks with little preamble. At first Ramona tries to respond with a blank, lobotomized smile, but soon she can’t help herself.

“I tried to do it and I found it very difficult,” she says about being asked to be a guest in Heather’s awesome rager house for two nights.

“Why go through this whole production if you really wanted to go the Hamptons?” Sonja asks, quite reasonably.

“I had a panic attack in the woods, so you know what? Screw you all for not getting it,” Ramona yells, then starts screaming “CAN YOU LET ME FINISH” and other similar conversation enders when the ladies try to reply.

They move on to Wineglassgate. “It was a knee jerk, I don’t have anger issues,” Ramona says, literally admitting to having such deep-seated anger issues that she reacted violently without thinking to someone giving her a playful splash in the lake.

“I don’t know if Ramona has PTSD, I’m not a doctor…but I know she gets over that post traumatic stress pretty quickly,” Sonja says, continuing to scare us all with her rational thinking. In the end, Ramona sort of apologizes (and then reframes the whole encounter later as an overreaction to Mario, who happens upon her pumping iron in her bedroom with her bangs in a curler and a bottle of red on a nearby table as motivation, one of the finer sights to be put into my eyes in 2014). It’s a little anticlimactic.

But wait — things are about to get even darker. As we learned earlier in the season, Kristen’s daughter Kingsley is 17 months old and she’s starting to worry about her development, as she’s still not walking. She has a physical therapist that comes to the apartment to work with the two of them regularly, and she asked Josh to be there. Point of order: the physical therapy session is a scant 30 minutes long.

Josh is immediately horrible about having to “take time out of the middle of [his] day” to help out his wife and baby, complaining to the physical therapist about the appointment being inconvenient and answering emails instead of paying attention during the session.

Kristen, embarrassed, asks him to put down his phone, at which point they get into an argument about who gets up earlier and does what with which kids every morning. (“It is not about you!” – Kingsley and Kingsley’s therapist’d inner monologue).

After the appointment is over, because remember, IT’S ONLY THIRTY MINUTES LONG, Kristen makes the very salient point that if Josh was in a thirty minute meeting he would hold off on taking other calls to deal with the task at hand. He tells her that he’s up early with the kids “six days a week on average” and is building a business and can’t be bothered, basically. He also tells her “You need to be supportive,” “Don’t get emotional,” and “Why do you think I don’t come home? There’s never food on the table.”

Kristen does not set him on fire, but the season isn’t over yet.

We get a palate cleanser in the form of Luann setting up her new BFF Carole with actor Nick Gregory, best known for being the guy you saw on Law & Order when you walked through the living room briefly to get to the kitchen in 2002. He’s handsome in a “Dad from a Lifetime movie (non-evil version)” way, and Carole is endearingly horrible at dating. She’s like a malfunctioning robot, spitting out random statistics from articles she read in Cosmopolitan in 1997, talking to Luann about how the date is going while still on the date, and telling us in an interview “I meet guys through friends, or late at night in bars when I’ve had too much tequila.” Get it, girl.

The final scene of the episode has Ramona and a turnt up Kristen meeting for tea on the Upper East Side. Ramona offers her flowers and a halting, embarrassed apology that strikes me as actually sincere. Instead of squashing the beef though, Kristen insists on grilling Ramona about whether she has a drinking problem or an anger management problem. I mean…fair questions, but it’s far more socially expedient to accept the apology and move on (and obviously gossip further about it with other people, I’m not unreasonable).

She has either decided this is her best hope for a storyline or she is misdirecting her anger at her monster husband toward Ramona so that she doesn’t commit mariticide. I get it, but also she could stand to take it down a notch.

“Maybe you have issues with my issues, but I don’t have issues,” Ramona sputters, having been needled back into being angry. Kristen storms out. Good talk.

Next week: The return of Aviva’s scary dad! Sonja, you in danger girl! 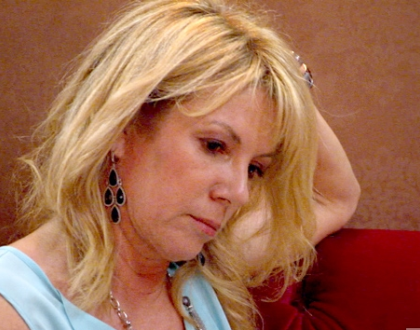