If you’re the sort of person who longs to hear a good old-fashioned rock album—not just an assemblage of audio files on a hard drive but a Complete Work, whose contents sound like they belong together—then you’re in luck. This week sees the release of a catchy, slick (in a good way), intelligent, coherent collection that you could easily imagine experiencing on vinyl, although its 60-minute duration means you’d need two discs to do it justice. (All the better for the true hardcore, of course.) It’s by a New York-based band called Roto’s Magic Act, and its title is Into the Unknown.

The leader of Roto’s Magic Act is James Rotondi, who’s shared his guitaristic talents with a number of groups over the years, including Air, Mr. Bungle, The Grassy Knoll, and Rachael Ray’s husband John Cusimano’s band, The Cringe. Into the Unknown is the Magic Act’s debut, but Mr. Rotondi did release an earlier album of solo songs, Summer Home, in 2009. (Full disclosure: He’s also a journalist, and I worked for a while in the same editorial office with him, on different magazines, back in the last decade.)

A mutual friend of ours once described him, half admiringly and half enviously, as “the handsomest man in music journalism.” Check out the video to judge the accuracy of that statement for yourself. Although his muscular, inventive guitar playing was what earned him a spot in previous outfits, Roto happens to be a clever songwriter with refined pop sensibilities and a strong singer whose vocal timbre suggests a higher-pitched Beck. Much like Elvis Costello, he’s an ardent fan of puns and extended metaphor. Sometimes overextended; when he sings about a romantic relationship “going south,” he can’t resist the temptation to add lines about catfish, pulled pork, and Huck Finn.

Musical reference points on Into the Unknown are decidedly ’70s-centric, ranging from Nick Drake to Big Star, the Eagles to Pink Floyd. And speaking of the latter, the rather Floydian sound effects that link many of the tracks—circus music, the pounding of typewriter keys, a lone wolf howling—only further the feeling that the whole album is a unified statement. The danger of pretentiousness looms, but Mr. Rotondi’s easy way with a melody helps him avoid the appearance of overreach.

The video at the top of the page captures a recent live Magic Act performance of Into the Unknown’s grand opener, “Circus Clown.” It emphasizes Roto’s blues-rock side, which is a fine side indeed, though I personally prefer it when his tunes become artier and more discursive in the style of Queen and Jellyfish, as on tracks like “Strays” and “The Old Trapdoor.” In any case, the clip will give you a decent insight into what constitutes the magic of this Act.

Roto’s Magic Act will be playing a record release show this Friday at 11 PM at Pete’s Candy Store in Williamsburg. 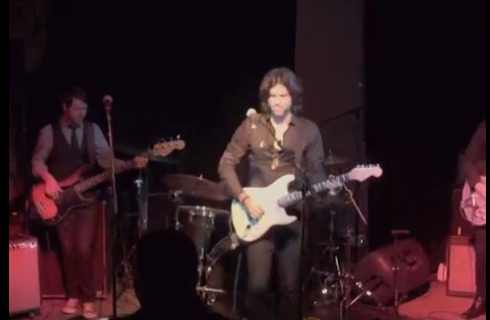