How can we clone Rust Cohle three times? (HBO)

No, I’m not completely planning my life around news of True Detective Season 2. I am most definitely not compiling theories and I positively did not rent out a sketchy storage unit. And it definitely doesn’t look like this. Whose even asking?

With that being said, I did relish in the fact that Nic Pizzolatto finally revealed some information on the show’s second season. In an interview with the To the Best of Our Knowledge podcast, Mr. Pizzolatto disclosed that there will not two, but three main characters, and they will move the setting from Louisiana to California.

“Right now, we’re working with three leads,” Mr. Pizzolatto said. “It takes place in California. Not Los Angeles, but some of the lesser known venues of California and we’re going to try to capture a certain psychosphere ambience of the place, much like we did with season one.”

Psychosphere, that’s a thing! A thing from the show! I know that!

“The characters are all new, but I am deeply in love with all of them,” Mr. Pizzolatto continued. “We have the entire season broken out, and I have a couple of scripts, and we’ll probably start casting within the coming month.”

So, with that, we learn Jessica Chastain is definitely out, California is in, and a trio is replacing the dynamic duo from season one. If anyone needs me, I’ll be endlessly analyzing this information. For journalism. 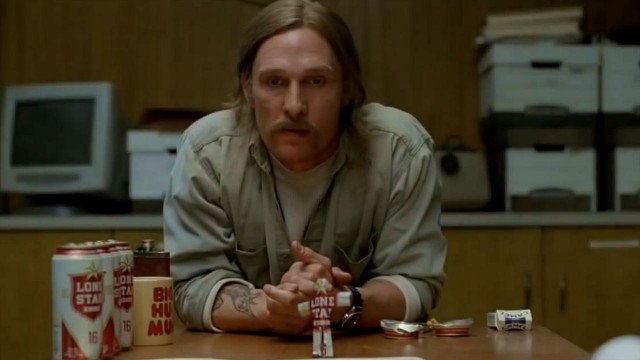