Last night’s episode of Silicon Valley marked the beginning of the end, as Pied Piper packed its bags and headed to TechCrunch Disrupt for the ultimate showdown with Hooli and Gavin Belson.

Before they make the trip, we’re updated on Hooli’s progress with Nucleus, Gavin’s product designed to rival Pied Piper. In Hooli’s sleek, high-tech offices, the bro-grammers inform Gavin that Nucleus is “optimal” — they’re perfectly prepared to demo the product in the upcoming startup battle.

We then cut to Pied Piper HQ, where the team is working off poorly hand-drawn charts, and Richard is locked in the bathroom with violent indigestion. We’re reminded who our underdogs are.

The Pied Piper team hops into Erlich’s Aviato-mobile and drives to the tech conference. On the way, a nervous, carsick Richard vomits out the car window. Can we all just agree that vomit makes any TV show or movie 36 percent worse? There is no show or movie featuring vomit that wouldn’t be better without the vomit. Case closed.

The group arrives at TechCrunch Disrupt, where they’re met by Monica as they enter the building. She explains that Peter Gregory isn’t there — he’s on safari with Lorne Michaels and Kanye West. She hands the group wristbands and informs them they’ll have to compete in preliminaries the following day. Monica’s preparedness makes Jared — who’s magically back from Arallon, with little explanation — start feeling unessential to the team.

As they move through the conference hall, the proliferation of flashy startup booths and clusters of dorky men transport us back to the Austin Convention Center at SXSW.

“Guys, this place is a vortex of distraction,” Monica says. “Normally, the tech world is two percent women. These next three days, 15 percent.”

You’d think Mike Judge, obviously recognizing the tech community’s dearth of women, would take the opportunity of a tech conference to introduce us to some cool female characters, but alas, ’twas not the case. Instead, the show continued to give us two-dimensional female characters presented in sexual situations.

At the booth next to Pied Piper, for instance, there’s a blond, pink-clad employee from a startup called “Cupcakely.” The #tech version of a damsel in distress, she asks Gilfoyle to come help her fix a bug in her code. He obliges.

Meanwhile, Erlich glances at the conference program, and immediately announces they have a problem: he’s had sex with the wife of one of the judges, Dan Melcher.

Flustered, Richard leaves to go work on the Pied Piper demo, which still isn’t finished. On his way to the hotel, he runs into Big Head, who’s been acting as a mole over at Hooli, and secretly conveying information on Nucleus back to Richard. Big Head ushers Richard around a corner to have a private conversation.

He explains that he was at a Valleywag party the night before, “which was crazy, by the way,” he tells Richard, “dude, there must have been like 12 girls there.”

At the party, Big Head says he met a woman named Sherry. Sherry, apparently, has been telling people that she and Richard used to date, and that Richard became obsessed with her after she broke up with him. Richard gets angry and denies the story, and we get angry because we’ve just learned of another female character who’s only there in a sexual context.

In the hotel room, Richard and Dinesh are working on the demo. To Dinesh’s extreme frustration, Richard can’t talk of anything but Sherry, and how completely un-obsessed with her he is. In his aggressive denial of his obsession, it becomes abundantly clear that she’s all Richard can think about.

Back at the convention center, Jared’s weird subplot continues to develop. Jared keeps offering to help the team, but finds that everyone seems to be 10 steps ahead of him, and he doesn’t like it. This same type of exchange happens over and over again, and we can’t figure out where the story is going. “I don’t get this subplot,” our notes from the episode read.

Next, we switch to an even lamer subplot — the one featuring Charlotte, the Cupcakely girl. Irritatingly helpless, she asks Dinesh to come her with java script, too. There’s obvious chemistry between them.

Meanwhile, Erlich is on a mission to track down Dan Melcher’s wife. When he knocks on the door of Dan’s hotel room, an unfamiliar woman — Dan’s new wife — answers. When Erlich asks why Dan divorced his old wife, Madeleine, the woman explains that Madeleine ended up taking a bunch of pills, moved in and out of rehab, and had a bunch of “disgusting affairs.” She assures Erlich, however, that Dan’s moved past it all. Erlich is relieved.

Soon after, the Pied Piper team meets on the TechCrunch Disrupt stage to plan out their presentation. Richard’s demo still isn’t ready, but Erlich is hugely confident, likely because he thinks Dan Melcher isn’t mad at him anymore. Erlich talks to one of the stagehands about incorporating moving spotlights into their routine.

Jared is sent away to go man the Pied Piper booth, and he’s sad. This subplot continues aimlessly.

Richard, who’s messing around with his computer, accidentally managed to broadcast a huge image of Sherry’s face — which he’d been looking at in his spare time — onto the stage’s backdrop. Sherry sees it happen, and tells even more people that Richard’s obsessed with her.

Let’s check in on another of this episode’s two-dimensional female characters. Charlotte. She’s making out with Dinesh in her hotel room. Dinesh can’t seem to get into it, fully, until he spies the coding on Charlotte’s laptop. It’s the most beautiful sequence of coding Dinesh has ever seen — so beautiful, in fact, that he finally gets turned on.

When he meets up with Erlich and Gilfoyle at the hotel bar later, he learns the truth: that beautiful coding was Gilfoyle’s, from when he assisted Charlotte earlier in the episode.

“Why is it that every time I’m about to have sex with a lady, [Gilfoyle]’s all up in there somehow?” he asks. IT’S BECAUSE YOU WERE ALWAYS MEANT TO HOOK UP WITH EACH OTHER, we answer to our TV screen.

Jared comes along and offers to buy everyone drinks, but it turns out that Monica’s already beat him to it, obviously. It’s the last straw for Jared — he asks to speak to Monica privately.

Next, Richard shows up at the bar. Sherry’s there too. They have a confrontation, wherein Richard yells crazily that he’s not, for the last time, obsessed with her.

Freaked out, Sherry takes out her phone and calls a friend. As she walks away, she overhears Jared and Monica’s emotional conversation — Jared is crying and complaining to Monica that he feels unwanted by his “partner,” Richard. Taken out of context, it sounds to Sherry like Jared and Richard are boyfriends, not business partners. Under the impression that Richard’s actually gay, she rushes back to him and apologizes for thinking he was obsessed with her, and admits she was way off base.

So that was the purpose of Jared’s whole subplot — acting as build-up for a completely unoriginal and stupid joke, wherein a straight person is mistaken as gay. Is that still considered funny? Didn’t Adam Sandler already make a crappy movie about that? That’s usually a pretty good indication that your joke is lame and stale.

Over at the bar, Erlich sidles up to none other than Dan Melcher’s new wife. We know where this is going, and we’re right. The pair sleeps together, multiple times.

The next morning, it’s finally time for the preliminary round of competition. Before Pied Piper’s demo, we’re treated to snippets from other companies’ presentations. This is probably the funniest part of the otherwise lackluster episode — it’s a montage of nerdy men saying obnoxious, stereotypical startup-y things like “local, mobile, social” and “making the world a better place” ad nauseam. They’re like beauty pageant contestants uttering “world peace.”

Finally, it’s Pied Piper’s turn. Erlich takes the stage in his Steve Jobs-esque turtleneck. The presentation begins with flashing lights and intense sound effects. It looks like a Katy Perry concert. Erlich gets out a few words — until he’s forcefully tackled by a furious Dan Melcher and knocked off his feet. The episode abruptly ends.

Stay tuned for next week’s episode, where we hopefully find out how Pied Piper fares against Hooli — and how Erlich fares against Dan Melcher. 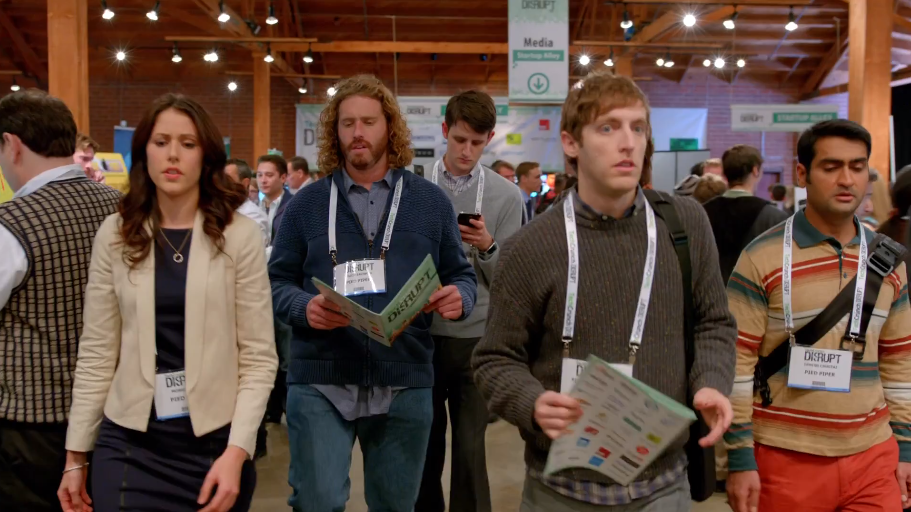