A water main broke on Houston Street this morning, causing thousands of gallons of water to flood the street. Firefighters responded and are pumping the now-brown H20 out of Katz’s Deli.

All lanes of East Houston Street were closed between Allen and Essex. The Lower East Side is basically off limits.

Thankfully, workers at Katz’s are taking the incident in stride.

“We’ll be back. Nobody can resist what we have. People will swim through water to get our corned beef and pastrami,” John James, 65, said to DNAinfo.

Because this is New York, dozens of people have Instagrammed the action. Here it is from every angle imaginable:

Houston floods. Luckily, looks like the water is going around the brisket. pic.twitter.com/N49wUlKvHQ

NOT the East Houston water-main-break flood; just business as usual on 2nd Ave and 1st Street. Thought for sure they'd fix this when the rich people moved in–this corner is always a lake after it rains–but not yet. 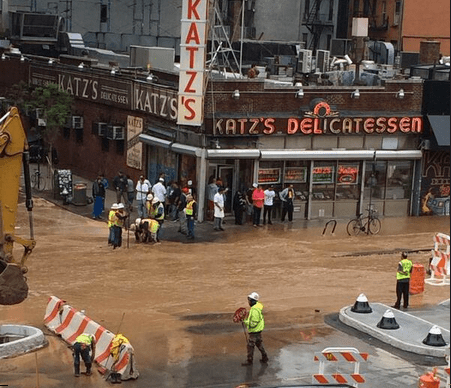