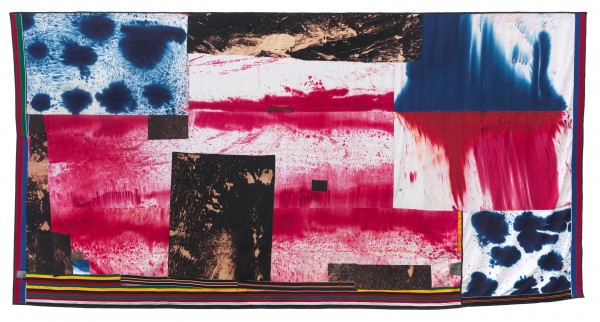 Sterling Ruby’s first exhibition in New York in four years, his first here with Hauser, is a shocking show of force. He has, in effect, staged a museum survey for himself, presenting fresh examples from long-running series alongside new pieces. The show should give pause to his most ardent detractors; young artists, who have liberally copped his ideas, will be made to do some thinking.

Recently, the most common result of artists with seemingly limitless ambitions meeting dealers with apparently bottomless bank accounts has been art exhibitions as overwrought disasters. Mr. Ruby, who is 42, has by contrast managed a restrained, almost classical display.

There are 19 works here, most of them gargantuan. Insanely drippy, shimmering ceramics still seem to be wet, particularly a huge raspberry-colored cup, a pool of urethane inside it. Explosively dyed fabrics, sewn together, are almost laughably packed with wall power. A spindly stuffed sculpture made of American flag-printed cloth is slung over a girder, and has a kind of creepy grandeur. Rough-hewn sculptures of steel and bronze (including a terrifying 18-foot-tall stove) exude menace. 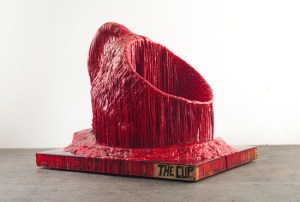 There are weak points, to be sure. Mr. Ruby is better in three-dimensions than two. His trademark, ghostly spray-painted canvases look less compelling, and less distinguishable from each another, every time I see them, and messy collages made from cardboard that once protected his studio floor should have stayed on the floor.

But if art has to be an elaborate, big-budget affair (and really, why shouldn’t it be sometimes?), I’d rather have Mr. Ruby at the helm than just about anyone else his age. His sinister, rococo ruins are defining objects of the present moment, exceeded only by 41-year-old Urs Fischer’s confections.

One large problem lingers. Seeing all of his work together (it’s scattered around one large space, as if in a collector’s storage room: two of this, two of that), the conceptual underpinnings that make Mr. Ruby’s work so intriguing—his heady commingling of art history, street culture, archaeology and industrial violence—look a bit rote. He has produced truly awesome objects, but they don’t quite coalesce into a grander point. Meaning has gone missing. (And when Mr. Ruby does go in for something hard-hitting, he lapses into pedantry: Does the world really need an 8-foot-tall, yellow, steel replica of Alabama’s electric chair in an edition of three plus one artist’s proof?)

It’s clear that Mr. Ruby wants to be—and is capable of being—so much more than just one of this era’s greatest artisans. An expert synthesizer (he cannily borrows from greats like Mike Kelley, Bruce Nauman and Robert Rauschenberg), he’s confidently, rapidly ascended into the art game’s highest echelon, artistically and commercially, but he has yet to wield, decisively, that immense power.