It pays to be cheap!

Three SUNY students discovered $40,000 cash inside a $20 Salvation Army couch. Reese Werkhoven, Cally Guasti and Lara Russo told SUNY New Paltz’s student-run publication, The Little Rebellion, that “We almost didn’t pick that couch. It’s pretty ugly and smells, but it was the only couch that fit the right dimensions for our living room.”

The students began finding envelopes filled with cash under arm rests and cushions. “Just when we thought we pulled out the last envelope we’d find another $1,000 a few minutes later,” said Ms. Guasti.

After much deliberation, the good samaritans sought out to find the owner, whose name was written on one of the envelopes, and return the money. The students tracked the name to a woman living in the Hudson Valley who asked to remain anonymous.

The Little Rebellion explained how she lost it:

Her husband had a heart condition and knew his time was limited. Before he died, he gave her money each week to put away for when he passed. For 30 years she stored her savings inside an old couch in the television room where she slept. When her husband passed away, she remained working as a florist and continued to store her money in the couch, until she had an operation on her back and went to a rehabilitation center for several months.

Upon the woman’s doctor’s advice, the woman’s daughter and son-in-law replaced the couch she used…with a full-sized bed.

“When we handed the money back to the woman, she told us that she felt like her husband was present in the room with us,” said Ms. Guasti.

The students received $1,000 as a reward for safely returning the cash. 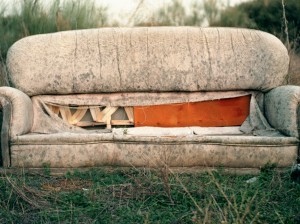