The Bachelorette is so good, it’s frustrating that we have to cap it off at a measly two hours per week. That’s why each Tuesday, we’ll be having a Bachelorette morning after rose ceremony to celebrate the people, places and moments that really made the previous night’s episode shine.

A rose to the environment for putting up with the producers’ absurd date ideas. We got a sense of the show’s rather worrisome carbon footprint when Andi and Eric went from their beach date to the top of a snow-capped mountain via a very unnecessary helicopter. When the world is covered in water, we’ll be able to comfort ourselves with the knowledge that Andi and Eric had an awesome time on their date.

Another rose goes to ABC this week, for telegraphing so clearly to the viewing audience that the purpose of the Bachelor/ette franchise is to humiliate everyone involved with their insane Magic Mike-themed group date. So many questions about this: why Magic Mike, two years after the movie came out? Who paid to see this and how much were tickets? Was one of Andi’s non-negotiable casting requirements for her crop of dudes “Must be cool with shirt removal at a moment’s notice”? A rose goes to Cody the personal trainer for declaring to the camera, “I will bare anything for Andi,” and stalking terrified/titillated audience members at the strip show like an orange dinosaur.

A rose to Deanna Pappas for that bizarre Suave commercial. How many takes do we think it took for her to perfect that wooden delivery?

A rose goes to Andi for her unapologetic hypocrisy — as a contestant on The Bachelor, she freaked out when she was asked to take her clothes off for a “charity” “photo shoot,” finding it incredibly distressing and shedding actual tears over the situation. Now that she’s the Bachelorette, getting naked in public is suddenly “fun” and “for a great cause.” I’m sure the producers had a role in Objectificationfest 2014, but maybe we didn’t need a reminder that she was totally insulted to be asked to do the EXACT same thing less than a year ago.

A rose to Josh, who clearly did research on “stereotypes” before this group date so he could seem extra ~vulnerable~ during his private convo with Andi. He doesn’t want to be dismissed as a typical athlete who sleeps around with a lot of women, he tells her. Don’t worry Josh, no one’s stereotyping you as a typical athlete because, let’s be honest, you don’t even play baseball anymore. He also looks a bit tight in the face — is he riding the preventive Botox train?

Speaking of Josh M., a booze-soaked rose goes to Craig, who spent the entire Magic Mike date extolling the virtues of Josh M.’s bod, then got turnt up at the post-date cocktail party, ending up in the pool in his dress clothes. Been there. He tried to salvage the situation with an original song he serenaded Andi with on the night of the rose ceremony, but the damage was done. He’ll have to rage somewhere else. May we suggest Bachelor Pad? (All roads lead to Bachelor Pad.) Clearly not there for the right reasons. (Screengrab: ABC)

And speaking of drunk Craig, A rose to Andi, whose frustration at the boys’ rowdiness on the group date reminded us exactly how we felt when a bunch of kids snuck out of our bat mitzvah party to play ‘spin the shoe’ in the lobby of the reception hall.

A rose to the word “staaaahhhp” and its slight variant, “staaaaahhhp it,” for overtaking “y’all” as Andi’s fave expression of the night. For a gang prosecutor, she sounds awfully BASIC.

Two roses to the old couple who talks to Andi and Farmer Chris on their date to the races. They remind us of that old Jersey couple from Des’s season whose home was destroyed by Hurricane Sandy. Where does The Bachelor/ette find these people? Ten mint juleps says they’re just race track employees the producers paid to act “married.” Uh, who are you? (Screengrab: ABC)

A rose to Andi and Farmer Chris, who valiantly sweated their way through a conversation about all the important life lessons they learned from the random race track couple they talked to for literally three minutes. Then they were forced to do that awkward thing where they pretend to enjoy having a D-list band serenade them with a private concert. What do you do at a private concert? Do you stand and watch respectfully? Do you dance? Andi and Farmer Chris decide to kiss. Farmer Chris is definitely hot, but we’re worried that his seeming lack of an upper lip might make kissing hard. An extra rose to Farmer Chris because he says, “[Andi’s] heart is something dreams are made of.” YOU ARE TOO GOOD A PERSON, FARMER CHRIS. RUN FAR, FAR AWAY FROM THIS SHOW.

A rose to Marquel for the absolutely ridiculous tie/shirt/sock combo he sports at the rose ceremony. If he ever decides he’s done with selling sponsorships, can he please create a line of patterned dress socks to rival Rob Kardashian’s? ABSOLUTELY NO ROSES WHATSOEVER for fireman Carl’s fashion choices at the rose ceremony. Carl, you were so beautiful. Truth be told, we were hoping Andi would just spontaneously end the season and marry you on the spot. But then you wore those glasses. Why, Carl, why? Andi apparently wasn’t into the glasses either, because she gave him the boot, along with drunken Craig and Nick the Golfer. “I don’t know where I went wrong,” Carl says after he’s eliminated. Uh, we do. Please put the fireman stripper costume back on 🙁 (Screengrab: ABC)

Finally, a rose to Nick the Golfer, whose cartoonish disposition (from driving up in the golf cart on the first night to getting really into that robot impression) makes us think he might be a professional actor hired by the show to play a “goofy contestant.” We have the same theory about last season’s Kelly Travis, the dog lover, who made a guest appearance at this episode’s Magic Mike date. THINK ABOUT IT. 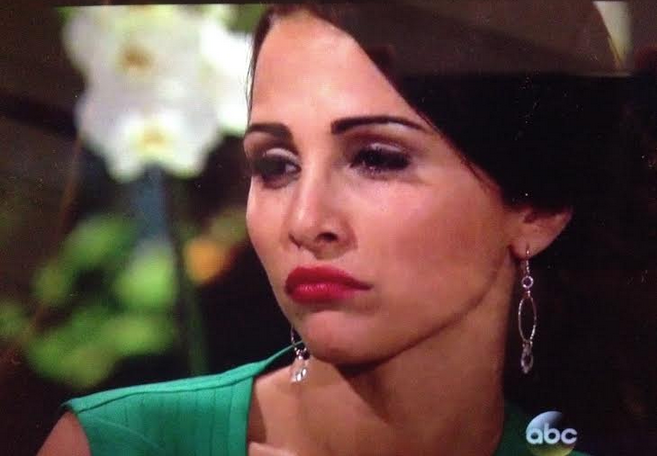