Gap, a publicly traded clothing retailer that once outfitted me for something like two dozen middle school Bar Mitzvahs, is a corporate sponsor at Frieze New York, an art fair in a big white tent on Randall’s Island which The New York Times has labeled “a defining marker of wealth and social status.” This is just the world we live in, folks! No one ever said it was supposed to make sense!

Walking into Gap Lounge, on a wall by the entrance, there is the following explanation for its existence:

Gap has created Gap Lounge at Frieze, a unique environment that brings to life Gap x Visionaire 2014: a series of limited-edition, collectible T-shirts inspired by art and fashion from past and future issues of Visionaire.

I love this sentence so much–mostly for the phrase “Gap has created Gap Lounge,” which is as short and declarative an utterance as anything the Hulk ever said. I want to sub in other monosyllabic words for Gap and come up with different lounges. For example: Dad has created Dad Lounge or Meat has created Meat Lounge. I also appreciate the repetition, basically to no end, of “Gap” and “Visionaire.”

So what’s cooking in Gap Lounge? Only the greatest lounge ever. The Platonic ideal of lounges. My favorite part about Gap Lounge, besides the flagrant disregard for the definite article “the,” are the geometrical benches, which appeared to be made of rock. Some of them had T-shirts laid out on them, and there were makeshift plywood clothing racks that lined the room that also displayed the T-shirts.

“What is this?” my friend, you might call him my Gap Lounge companion, asked no one in particular, then kicked one of the benches. “It’s foam,” he said, his voice registering disbelief. Foam benches made to look like solid rock.

Resourceful and comfortable? Well, that’s just Gap Lounge for you.

Elsewhere, a lanky bald man stood in the center of Gap Lounge, looking at the wall and not moving or speaking. He remained there in place for the entirety of my visit to Gap Lounge without budging. I’m not kidding. He might still be there. This being an art fair, one might question whether or not this was some kind of performance, but I’m pretty sure he just really liked Gap Lounge. Gap Lounge is likely immune to lowest-common-denominator performance art anyway.

At one point, an old man and his wife walked into Gap Lounge. The man asked a Gap Lounge employee about one of the T-shirts. This one had an Alex Katz painting on it. The employee went behind the bar–did I mention Gap Lounge has a bar?–to a stack of T-shirts and pulled one out.

“Go look at ’em over there, Richard, they’re on the things!” the man’s wife said, referring to the T-shirts laid out on the benches.

Inspecting the T-shirt, the man’s wife said, “It won’t fit you!” and pulled him forcefully out of Gap Lounge, shouting “Sorry!” as they exited. This provincial interaction took on biblical significance inside Gap Lounge. Gap Lounge transformed it into the final scene of Paradise Lost. Everything simply has more meaning inside Gap Lounge.

My Gap Lounge companion then texted me the following poem:

Life is a cycle.

Men die and babies are born. 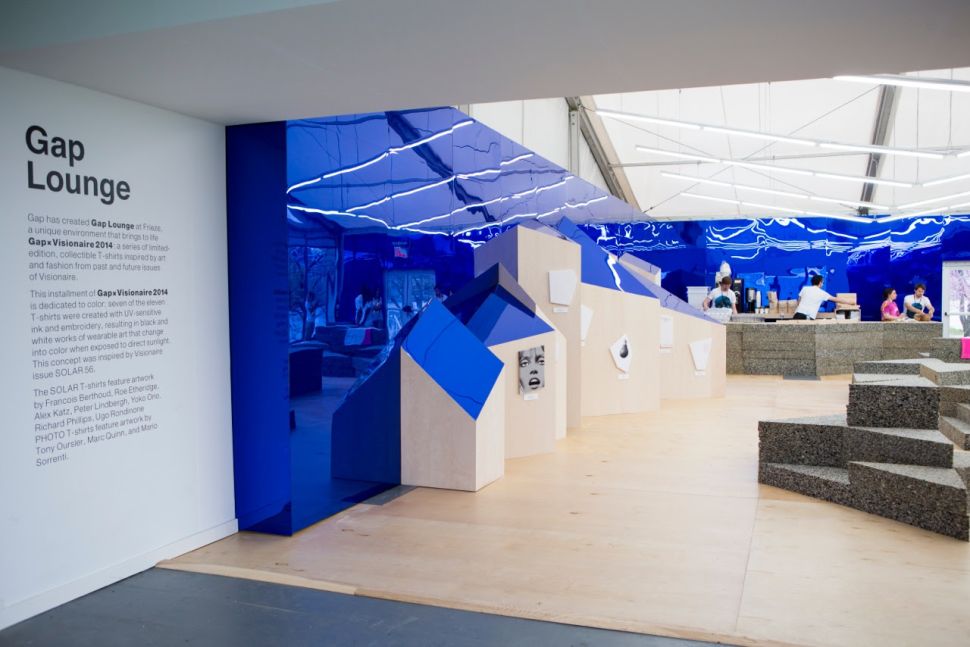