While many starchitects make their names with buildings that ostentatiously call attention to themselves, the designs of Robert A.M. Stern Architects are a triumph of contextualism, clever twists on classics known for their ability to blend into historic and regional landscapes. The firm’s designs are both elegant and eminently liveable, looking in the words of one critic, “like they have always been there.” Mr. Stern’s 300-person firm is responsible for designing three of Manhattan’s most successful residential developments—15 Central Park West, Superior Ink and 18 Gramercy Park—which set uptown and downtown sales records. There are downsides, however, to pleasing one’s public so unabashedly—namely, the firm’s work is often denied the kind of fawning adulation that showier, flashier starchitecture commands. The partners who work under the Robert A.M. Stern are similarly understated, as you might expect architects who have spent their careers at another architect’s eponymous firm might be. The firm’s four house partners—Roger Seifter, Randy Correll, Grant Marani and Gary Brewer—decided to dart into the spotlight this May, however, publishing Designs for Living, a 392-page tome of their house designs. Recently, Mr. Seifter and Mr. Correll sat down with the Observer in the firm’s Midtown West offices—a bright, airy space overlooking the Hudson River. When visitors walk past the reception desk, they are directed to wait in a large, open library, which we were assured is very heavily used by the firm’s architects.

What are some of the biggest misconceptions that people have about the process of designing a house?

Mr. Seifter: A lot of people think that we tell them what to do; they don’t realize how collaborative it is. People who don’t know us may think of us as a kind of starchitect firm, where our ego, or Bob Stern’s ego, drives the process. But it’s very much a collaborative effort.

Do you think other elite firms work in a way that is much less collaborative?

Mr. Correll: I think it varies and that younger architects are generally more collaborative than older architects. I mean, if you go to Hugh Jacobsen you get what he tells you to get.

So there’s a difference between how younger and older architects approach projects?

Mr. Correll: I think that in our society, the older generation of painters, artists, architects were much more, “I’ll give you the magic.”

Mr. Seifter: Maybe it’s a holdover from the Fountainhead complex. When you’re working within established styles, with the same elements, how do you keep designs fresh?

Mr. Correll: We’re not so self-referential. If someone came in today and said I want a new shingled house in East Hampton, we wouldn’t be going back to our own houses and looking at them. We’d be looking at McKim, Mead & White. We try to create a fresh storyline with every house.

How do you build research into your design process?

Mr. Seifter: We’re an academically-based office and research is part of our lives. We come from academic backgrounds where research is a natural effort and not a chore. And I think most of us, when we take vacations, we go to places that are architecturally significant. We’re architecture nerds.

What was the last trip you took to an architecturally significant place?

Mr. Seifter: Well, I won’t mention my last trip to Martha’s Vineyard because there’s no architecture there. There’s not any architecture in Martha’s Vineyard?

Mr. Seifter: Well, nothing to speak of.

Is Nantucket any better?

Mr. Correll: Worse, I’d say. They have the historic guidelines that are really limiting and in fact we’ve never been asked to work there because really what’s the point?

Many of the firm’s most popular buildings in New York have been old-fashioned designs. Do you think there’s a shift away from very modern, glassy architecture?

Mr. Correll: I don’t think we’ve seen that. Although I think both 15 CPW and the new building we’re doing at 220 Central Park South are attracting a more New York-based crowd. Many of our house clients want an apartment in those buildings. Whereas no one we know is moving into 157 W. 57th St. That’s a different market. It’s maybe how people who don’t live in New York perceive how they should be living in NY. I don’t think a real New Yorker would be comfortable in that building.

Maybe it’s connected to the fact that a lot of people buying units there won’t actually be living in them?

Mr. Correll: Right. Whereas when you go into 15 you see baby strollers and families.

Are there any challenges to designing houses or apartments with this classic feel and also meeting the desires or expectations that people have now?

Mr. Seifter: Well, the places where people sleep need to be much more elaborately planned out than they were in the 1920s. A lot of the houses we admire, you walk into the main floor and there are beautifully laid-out formal rooms in an architectural sequence. But you go upstairs and there’s a maze of small rooms with tiny bathrooms, not enough bathrooms. Now the master suites are much larger, with separate bathrooms, separate dressing rooms. And in terms of square footage all those bedrooms can overpower the rooms on the first floor, so we need to balance that out in some way. We do it with porches, or larger rooms downstairs, or sometimes by taking the master bedroom suite to the first floor.

What do you think shifted that people want these rooms?

Mr. Correll: People shop more. The closets are not enough, you need a room to house all your shoes and bags.

What else do people want in their houses?

Mr. Correll: A nice kitchen even if they seldom set foot in it.

Mr. Seifter: We did have a client about 20 years ago, we renovated her townhouse in the city and she asked seriously whether she actually had to have a kitchen. She said, ‘as long as I have a phone, I can make reservations.’ But that’s the rare client. And they all want really, really nice bedrooms. Not cavernous, but with a lot of fixtures.

Why not cavernous? Do people not want to feel like they’re in a mansion?

Mr. Correll: I think there are plenty of people that do. When you drive around Long Island or other places, you see mansions. Geography matters, too. In the Hamptons, however rich you are there’s going to be someone richer than you, so you can do what you want, nobody cares. But if you go to other places in the country, like Chicago, there aren’t as many wealthy people and there’s more of a modesty. You want to have all the things that you want, but you want your house to fit in and look nice. You don’t want to feel like the rich guy on the block.

Mr. Seifter: I think our clients want their houses to feel like home, they don’t want to feel overpowered by their houses. They do often end up being large because of their programmatic needs or because of their lifestyle but they don’t want to walk out the door or feel like they need to run a mile back to the bedroom because they forgot their keys.

How do you design to address that?

Mr. Seifter: Beautiful details that are scaled to people and not to institutions or civic buildings.

Mr. Correll: And to break down the massing of the house, not like a big box with columns on the front, but it has more of a storyline, more rambling.

In very high-end homes, the spaces are often as large as can be.

Mr. Correll: Every once in awhile, we get summoned to Greenwich to fix a McMansion—I’m doing it now—and you walk into these houses and there’s no thought as to how they’re furnished or how they’re going to be used. They just build a big house with lots of big rooms and very little thought goes into it. Whereas our houses, from the moment we put pencil to paper we’re thinking about how it’s going to be used, how it’s going to be furnished, if the wife or the husband are home all day, how they’re going to move through the house from morning to night.

Mr. Seifter: A lot of those houses have a kind of supermarket architecture where you walk in the front door and it’s all there. It lends itself to a kind of immense scale and I think our houses are understood more by walking through them.

Are there certain types of American houses that have fallen out of favor?

Mr. Correll: There’s one architect we love, Harrie T. Lindeberg, and his houses are very Cotswaldish. We do translate details from them, but they tend to be a little dark inside.

Mr. Seifter: Well, yeah, because the windows are small. And they are typical of the houses that have substandard by today’s standards second floors because the roofs are usually steeply pitched and the second floors are usually much smaller than the first floors. It’s usually a rabbit’s warren of tiny cells up there. It is more difficult to translate into a modern idiom.

Would you like to see any older preferences come back, from a purely aesthetic point of view?

Mr. Correll: I would like to see our clients spend less time in the kitchen and more time in the formal rooms of the house. The irony is we see people with a big staff, they have a chef and maids, they can afford to have things done for them and they don’t seem to take advantage of that. They still like to sit at the kitchen counter and have a bagel in the morning.

Mr. Seifter: If I lived in one of our houses, I’d eat in the dining room every day. I like the ceremony; it doesn’t have to become a ceremony, there’s just a certain ritual to eating in a dining room, it lends a certain grace to a very everyday function. Almost by default.

So is that the least favorite room in houses now?

Mr. Correll: That’s for sure, you’re going to have Thanksgiving dinner there, but unless you have dinner parties, you’re not going to be using it much. 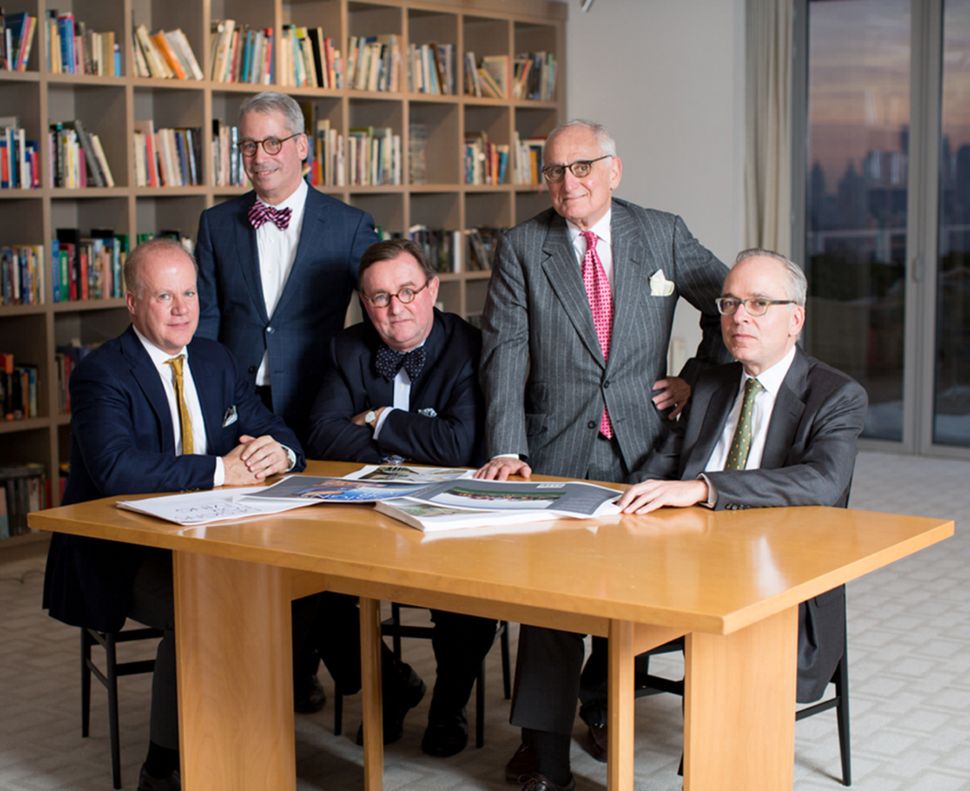