Despite the mayor’s opposition, Public Advocate Tish James is not giving up on her universal free lunch crusade.

“They’re doing it in Chicago, they’re doing Schenectady, in Buffalo and believe it or not, they are even doing it in Detroit. Yes, Detroit,” Ms. James boomed at a rally this morning on the steps of City Hall.

Ms. James wants universal free lunch in the city’s public schools for more than a million children. Though many students are already entitled to free lunches, Ms. James has argued that the poverty stigma associated with these lunches prevents needy students from getting the nutrition they need.

Since she took office, this has been one of her top priorities, even though Mayor Bill de Blasio and the Department of Education have questioned the plan’s feasibility.

Ms. James emphasized she had conducted research on the program’s consequences on Title I funds, which critics say can be lost if Ms. James’ plan becomes a reality.

“Additionally, I recently requested the city’s Independent Budget Office conduct a review of costs and identify any fiscal problems with universal school meals,” she continued. “And they found the following: our original estimate of 20 million dollars was more than accurate. The amount is covered by the 24 million dollars allocated by the City Council, and I thank the City Council.”

Ms. James, a former councilwoman, has the backing of Council Speaker Melissa Mark-Viverito and the council’s progressive wing. Ms. Mark-Viverito provided the funding for Ms. James’ proposal in the City Council’s budget plan, but Mr. de Blasio has not in his executive budget.

Soon, the two sides will meet to hash out a final budget. Ms. Mark-Viverito said universal free lunch is an “utmost priority.”

“This program is of the utmost priority to the New York City Council, it was in our budget response,” Ms. Mark-Viverito said. “We are going to make sure Chancellor  Fariña and the Department of Education know how much of a difference universal free lunch will make in the lives of children and families.”

“The link between nutrition and learning simply cannot be ignored. As poverty and inclement inequality threaten more and more families in New York City, too many of our children are attending school on an empty stomach, hungry, distracted and unable to focus on their education” Ms. Mark-Viverito she added.

The Department of Education reiterated their concerns about the loss of Title I funding in a budget testimony today.

“While we support Speaker Mark-Viverito’s and Public Advocate James’ goal to increase our students’ daily access to a healthy school lunch, the universal free lunch program changes the way kids are counted for federal Title I funding,” the DOE said in a statement. “While this would not affect the total amount of Title I funds received by the City, the Department has concerns about how the implementation of this program would affect the distribution of funding among schools serving many low-income families.” 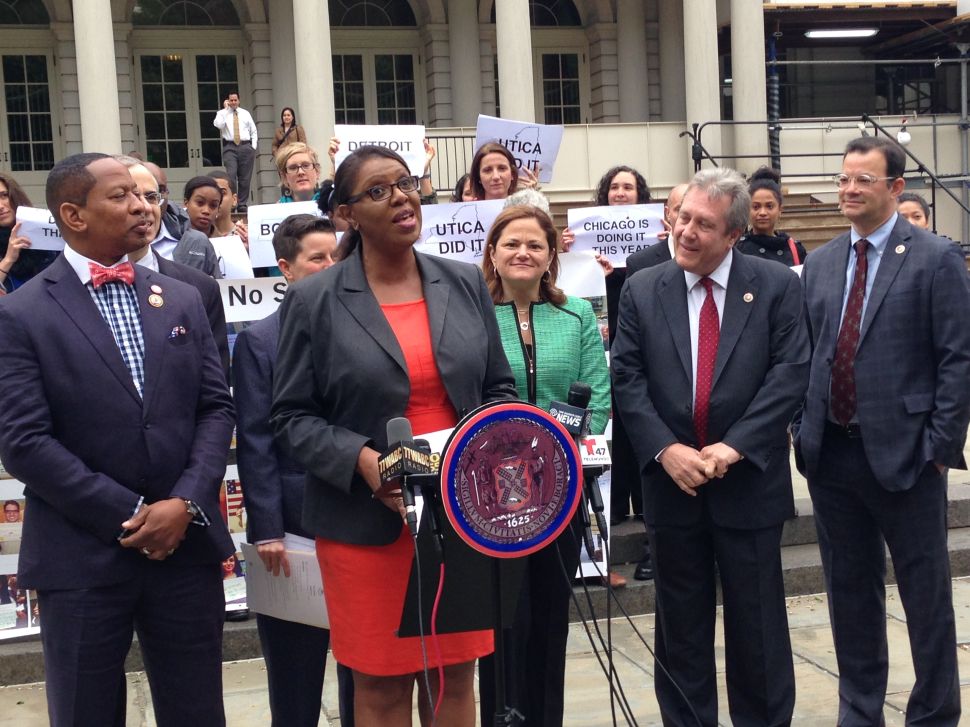