TRENTON – Former Trenton Police Director Jim Golden may not have made the June mayoral race runoff, but in the aftermath of his defeat in Trenton’s May municipal election, Golden might wind up playing the role of kingmaker for the city’s next mayor, according to a source.

A Mercer County Democratic political operative close to Golden told PolitickerNJ.com on Tuesday that Golden has either met with, or is scheduled to meet with, the two candidates who made the June 10 runoff, Eric Jackson and Paul Perez, to discuss his endorsement.

The source stated that Golden met with Perez on Monday night, and is meeting with Jackson on Tuesday morning.

“There has been a frenzied effort to get Jim Golden on board for both Eric Jackson and Paul Perez,” the source said. “They’ve been working [Golden] and working the phones.”

Jackson, director of the Department of Public Works and Urban Development in Plainfield and the former Trenton Public Works director, was the top vote-getter in the May 13 mayoral election with 3,020 votes, or 30 percent. Perez, an armed forces veteran who also worked in law enforcement, garnered 2,134 votes, or 21 percent.

Sources close to Worthy told PolitickerNJ.com on Tuesday that Worthy has yet to decide who he will endorse in the runoff, and that he is still “not ready” to endorse either candidate.

With Worthy unwilling as of yet to pull the endorsement trigger, the Mercer County Democratic operative believes that Golden’s endorsement could have the most political bang for the buck in Trenton.

“Many people see a victory in the [runoff election] as going through [Trenton’s] West Ward, and therefore through Jim Golden,” the source said, noting that the West Ward is Golden’s power base. “Walker’s posture that he isn’t endorsing anybody makes [Golden’s] endorsement, because of his credibility in law enforcement and his sustainable, condensed base of votes, something that he can leverage.”

Golden is looking to make his endorsement in the Trenton mayoral race runoff next week, according to the source. 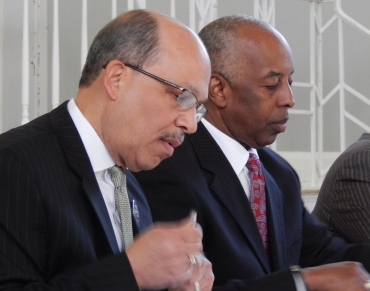