Take that, everyone who said the adventures of Rust Cohle and Marty Heart were sexist! Turns out HBO’s favorite crime-fighting mini-series True Detective will be back next season with a female in the lead, and according to several outlets, the role has been offered to Academy Award-nominated Jessica Chastain.

Recent rumors have stated series creator Nic Pizzolatto was seeking a female-driven cast for Season 2 of the hit HBO series, and now today, Nerdist has learned exclusively one of the names that may be on the bill in 2015: Jessica Chastain.

According to sources, the Zero Dark Thirty actress has been offered a leading role in the second season but has yet to accept. As for official confirmation, we reached out to representatives for Chastain, who have declined to comment at this time.

But E! Online got a rep on record denying the story:

Don’t quit those #TrueDetectiveSeason2 tweets just yet. Despite widespread rumors that Jessica Chastain has joined True Detective for season two, E! News can confirm the Oscar-nominated actress is not heading to the HBO series. While the thought of Chastain on True Detective is exciting, reps for Chastain told E! News that the actress is not doing the series.

So maybe Chastain turned down the role in the course of a day? Or this is some classic misdirect, as is the want of Nic Pizzolatto? (Thanks for nothing with those Yellow King/Carcosa theories, buddy!)

Either way, we’re not going to stop with our favorite meme until this happens! 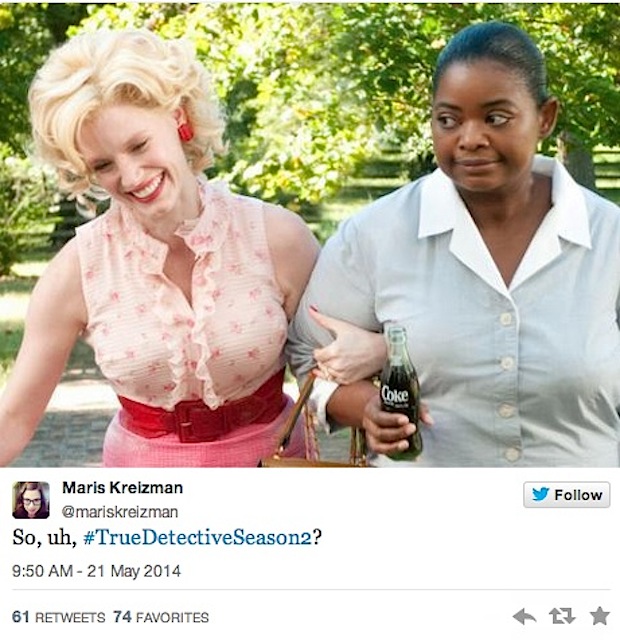