Before it was my job, the way I alleviated my feelings of guilt for watching so much television was to binge on it while working out. (And by “working out” I mean “cycling–not spinning–on a stationary bike on the lowest setting possible.”) Because the television is right in front of me and The New Yorker was sooooo far away (like, I left it at home or possibly didn’t buy it this week), I could justify vegging out to the worst shows imaginable.

Unfortunately, my workout regime was so erratic that I’ve gotten a pretty skewed idea of what certain shows are actually about. Here’s my recap of what I could gather was going on last night! Juliette from Lost and the dad from Twilight team up to battle Gus Fringe. Also the cop from Heroes is there. There is a missing president, as evident from last night’s season finale, where Juliette and TwiDad went around screaming “Where is the president??” So maybe it’s like 24, and the guy just wandered away because he has dementia? A reality show where contestants battle to see who knows the most about previous Survivor seasons. Hosted by Dr. Oz, I think. A hard-hitting news show where journalist Brooke Anderson asks the tough questions to today’s most relevant celebrity figures that are also appearing on Doctor Phil the same night.* Hair gets karate-chopped. Then everyone takes selfies. A Ron Howard/Arrested Development wannabe narrates over an otherwise palatable comedy about today’s bar hookup culture. Produced by Ryan Seacrest; accordingly,  no character has yet to make it past “heavy kissing.” Apparently now if you win the competition, you get to take the runner-up to prom. This is actually a sweet deal, considering that most Idols look like this, while the also-rans look like this.

*Based on hearsay from the rest of the co-hosts. 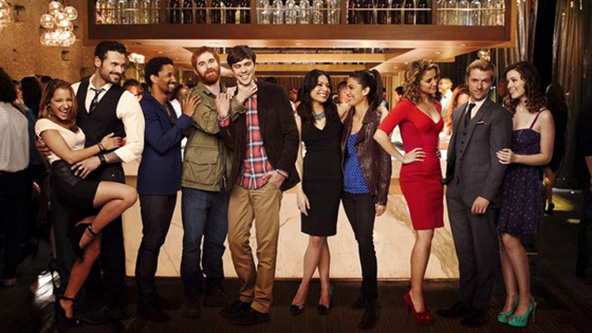